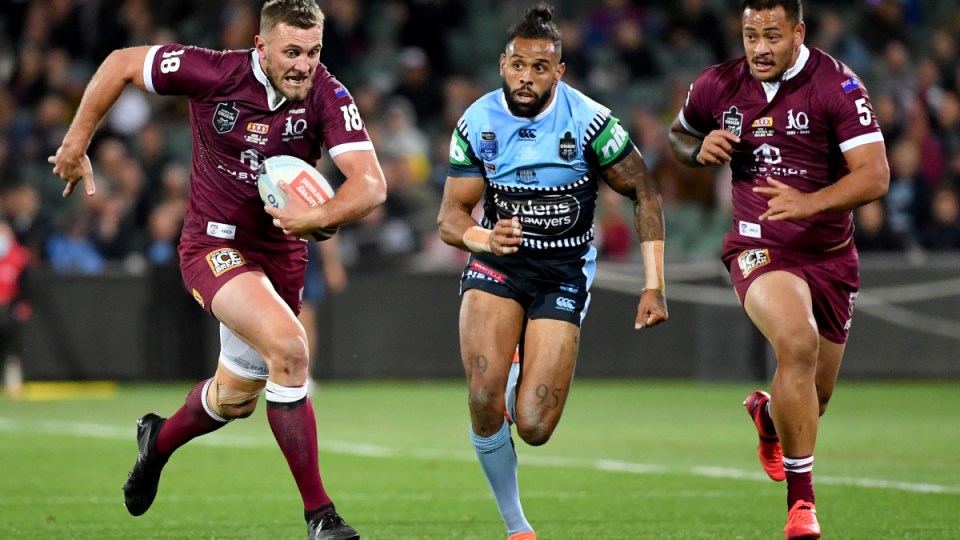 Kurt Capewell (left) of the Maroons makes a break past Josh Addo-Carr (centre) of the Blues during Game 1 of the 2020 State of Origin series on Wednesday night. Photo: AAP

NSW face the daunting prospect of overturning 15 years of heartache in Brisbane to keep their hopes of a State of Origin three-peat alive.

Queensland’s 18-14 win over the Blues in Adelaide on Wednesday night gave them a stunning 1-0 series lead, as they defied the critics to claim the early advantage.

It puts NSW in a predicament they have rarely survived in the 40 years of Origin.

The Blues must now beat Queensland in Sydney next Wednesday to stay in the hunt, before winning a decider in Brisbane for just the third time in their history.

In fact, NSW have prevailed in just three must-win games in the series’ history in Queensland from 15 attempts.

Their last success in such a game in Queensland came way back in 2005, having lost six straight since then.

“We have got to set ourselves and find our best 17 for next week at home and it’s do or die now, so that is the way it is, we have got to face it.”

Adding to the Blues’ pain is that whenever a neutral venue has opened a series, the winner has gone on to lift the Shield.

NSW can at least take some confidence from last year, where they overturned an 18-14 loss in the series opener to take the series 2-1.

But at least on that occasion the remaining games were in Perth and Sydney, where mass changes were made for Game II.

“Of course (you take confidence from that),” Fittler said.

“They have got great character and they know now what sort of team they’re playing against.

“Our quality wasn’t that fantastic so it’s up to us. I still feel like the ball is in court and we can turn it around.”

Queensland’s Game I win was fantastic, with their eight rookies standing up and never showing any signs of nerves after falling behind 10-0 at half-time.

But coach Wayne Bennett and captain Daly Cherry-Evans have long enough memories to know they cannot let it slip like last year.

“It’s obviously nice to win, but we were lucky enough to win Game I last year.

“So we won’t get too far ahead of ourselves.

“The best games I have been involved in are the ones where you win the series.

“This is a nice win, but you play for Games II and III. So that’s where we need to get it right.”

Blues must now battle against history in Origin bid