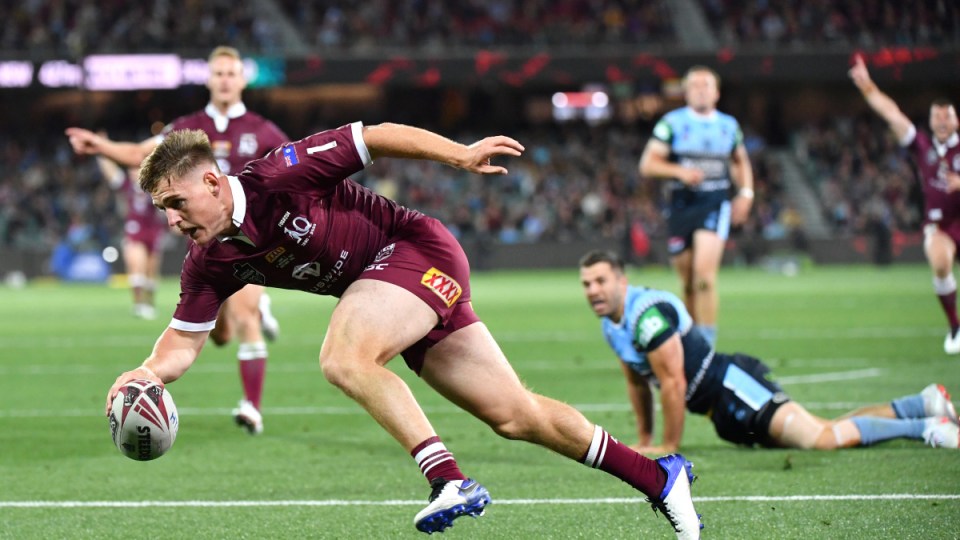 Queensland fullback AJ Brimson has been ruled out of the series. Photo: AAP

Queensland’s State of Origin high has been shattered by a serious foot injury to emerging fullback AJ Brimson after his standout debut in Wednesday’s victory.

The Gold Coast 22-year-old appeared to emerge unscathed from the Maroons’ upset 18-14 win in Adelaide, Brimson scoring a try in a confident first outing as the Maroons’ No.1.

But he will play no further part in the series, in which New South Wales will have to defy history to achieve a three-peat.

His 2021 NRL season has also been turned on its head after scans on Thursday revealed a lisfranc ligament injury.

Serious lisfranc injuries can require up to five months on the sidelines, something star Wallabies centre Jordan Petaia can attest to after the ailment saw him miss the entire 2019 Super Rugby season.

Whether surgery is required is still to be determined, a specialist on Thursday allowing Brimson to remain in camp along with Kurt Capewell, who is likely to recover from his groin tightness and be available to play in Sydney next Wednesday.

Brimson had surged into Origin contention on the back of just nine outings for the Titans after overcoming a broken back and returning faster and stronger.

“I was stoked to make my Origin debut and to get the win was an incredible feeling,” Brimson said.

“I’ve got great belief in the squad and we’re really well placed to go on and win the series.”

Injuries have tormented Queensland’s campaign but they do have the luxury of calling on Valentine Holmes to replace Brimson next week, the North Queensland talent unavailable for Game I because of suspension.

Holmes has an impressive eight tries in just five games for Queensland, but hasn’t played for Queensland since returning from his short-lived NFL stint with New York Jets.