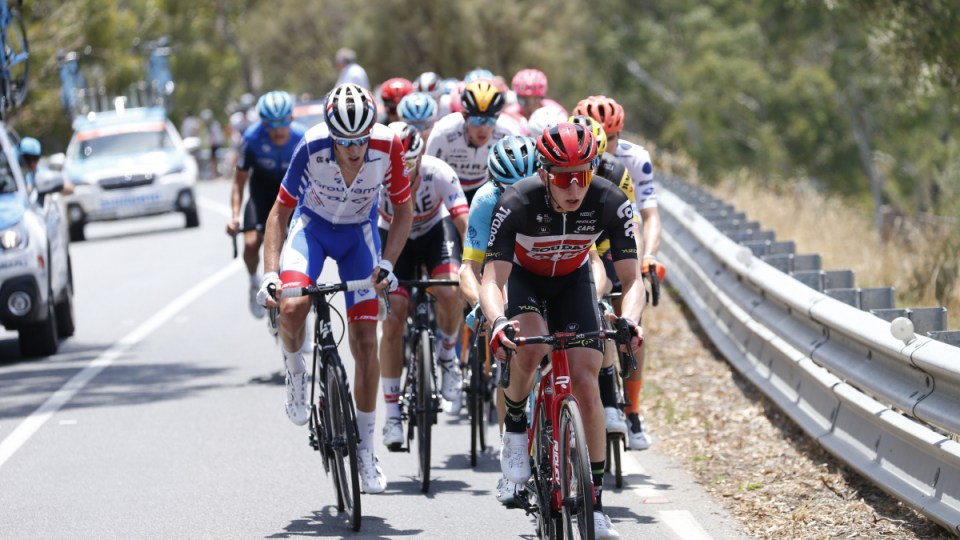 Matthew Holmes of Lotto Soudal leads the stage in the Tour Down Under, from McLaren Vale to Willunga Hill on January 26. Photo: Sipa USA

Australian cycling’s two biggest annual events have been rubbed off the 2021 calendar because of the global pandemic.

Adelaide’s Tour Down Under and Victoria’s Cadel Evans Great Ocean Road Race bowed to the inevitable on Sunday night, making their announcements within minutes of each other.

Soaring coronavirus numbers in the northern hemisphere and the late end to the 2020 cycling season, again because of coronavirus, ultimately made it impossible for the events to go ahead at the start of next year.

The cancellations include the women’s races and support events.

Today, Visit Victoria announced the #CadelRoadRace will not be staged in 2021.

We know riders and fans will share our disappointment 😢 but also understand the impacts of the ongoing global pandemic.

It will be the first time the TDU has not gone ahead since it started in 1999, while the Cadel Evans one-day race started in 2015.

“But this decision has been made by putting the health and safety of our riders, event partners, spectators, workforce, volunteers and broader community first.”

Events South Australia and Visit Victoria are planning domestic cycling events in a bid to help fill the void.

The Tour Down Under, Australia’s first WorldTour race, was due to be staged from January 19 to 24, while the Cadel Evans elite one-day races were scheduled to be held in and around Geelong on the weekend of January 30 and 31.

Speculation had been rife for several weeks that the two events probably would not go ahead next year.

“We have done all we can to consider how we can deliver it,” Events SA executive director Hitaf Rasheed said.

“The complexities and risks involved with quarantining and international border closures have ultimately proved too much to ask of some of the teams.

“(They) have have endured a stressful, challenging and compressed 2020 season that will run later than normal.”

Former cycling star Stuart O’Grady took over from Mike Turtur as Tour race director this year and January was to be his first time in charge.

“Of course I am disappointed but, given the challenges, our priority needs to be the health and safety of South Australians, our communities and the international cycling fraternity,” O’Grady said.