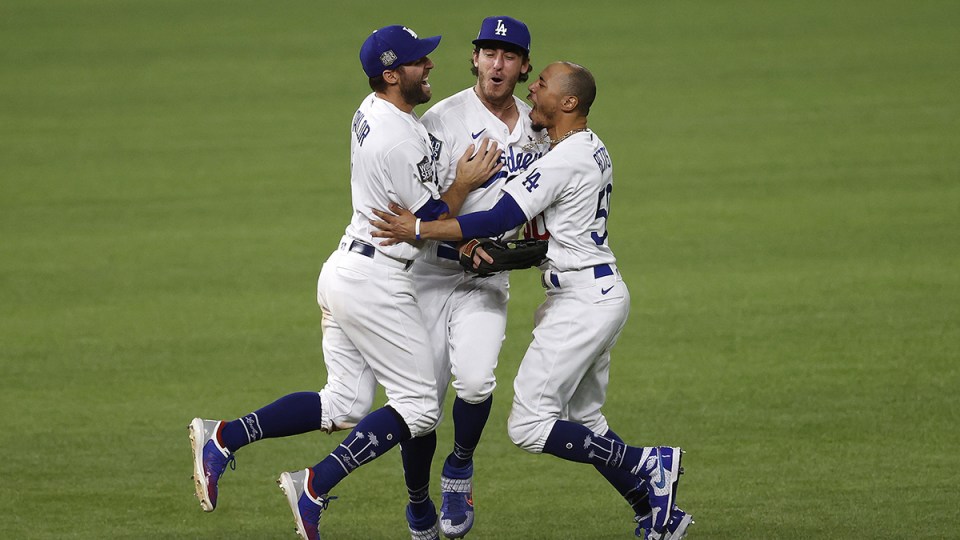 There was no champagne and a mask on nearly every face as the Los Angeles Dodgers celebrated their first World Series in 32 years in a manner no one could have imagined prior to the coronavirus pandemic.

They started the party at the neutral Globe Life Field – the new $1.2 billion home of the Texas Rangers – without Justin Turner, too, after LA’s red-headed star received a positive COVID-19 test in the middle of their clinching Game 6 victory.

Turner was removed from Los Angeles’ 3-1 victory over Tampa Bay Rays before the eighth inning when results showed he had registered Major League Baseball’s first positive test in 59 days.

He wasn’t initially on the field as the Dodgers enjoyed the spoils of a title earned during a most unusual season but he returned later, hugging long-time teammate Clayton Kershaw and sitting front and centre for a team photo next to manager Dave Roberts with masks nowhere in sight.

In a year that has been so improbable, the @Dodgers are #CHAMPS. pic.twitter.com/bsiXjhDcWf

“Thanks to everyone reaching out!” Turner said on Twitter.

“I feel great, no symptoms at all. Just experienced every emotion you can possibly imagine.”

MLB Commissioner Rob Manfred confirmed Turner’s positive test moments after presenting the World Series trophy on Tuesday – a jarring reminder of all that’s been different in the truncated 2020 campaign as the perennially favoured Dodgers finally ended their frustrating wait for a seventh championship.

“I had a crazy feeling that came to fruition,” Roberts said.

“It’s just a special group of players, organisation, all that we’ve kind of overcome.”

Thanks to everyone reaching out! I feel great, no symptoms at all. Just experienced every emotion you can possibly imagine. Can’t believe I couldn’t be out there to celebrate with my guys! So proud of this team & unbelievably happy for the City of LA#WorldSeriesChamps

“It was absolutely phenomenal. This team was incredible,” Seager, who batted .400 with two homers, five RBIs and six walks against the Rays, said.

For Kershaw, one of the most accomplished pitchers in baseball history, it was a maiden championship after 13 seasons.

“This year has been crazy, but no matter what, we’ll look back on this and we’re World Series champs,” Kershaw said.

“To get to say that and get to be part of that, it’s so special no matter what.

“The only thing that may have made it better would be to be at Dodger Stadium.”

Julio Urías on what it means to close the game and the feeling of getting the last out of the #WorldSeries. pic.twitter.com/zjWUZ7vUCc

Success didn’t come cheap for the Dodgers, who spent $3.69 billion ($5.17 billion) on player payroll since 1988, which is one of the highest figures in the MLB over that span.

For the Rays, a decision by manager Kevin Cash to stick by their philosophy of not allowing starters to face hitters for a third time in a game proved costly.

Left-hander Blake Snell was pulled despite them leading 1-0 and the pitcher being dominant over more than five innings.

“I guess I regret it because it didn’t work out,” Cash said, after the Dodgers scored twice in the sixth innings and once more in the eighth.

“Personally, I thought Blake had done his job and then some.”

Randy Arozarena, the powerful Tampa Bay rookie, extended his post-season record with his 10th homer coming in the opening innings.