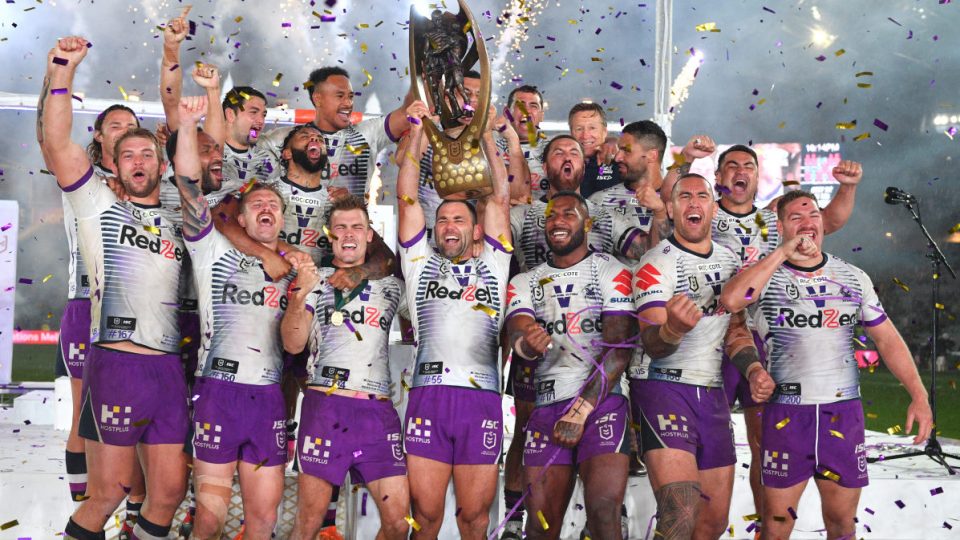 What next? Melbourne Storm, led by Cameron Smith, enjoys the spoils of victory in 2020. Photo: AAP

Melbourne has pulled off the finest premiership victory in its illustrious history by holding out Penrith 26-20 in a bizarre NRL grand final.

In a nerve-wracking finish at ANZ Stadium on Sunday night, Penrith came from 26-0 down with 28 minutes to play to reduce the margin to six with just three seconds remaining.

With Storm down to 11 men after Jahrome Hughes and Brandon Smith were sent to the sin-bin, Penrith had one final play to level it from the kick-off after a late Nathan Cleary try.

But after the Panthers went back and forth across the field, the ball landed in Felise Kaufusi’s hands to wrap up Melbourne’s fourth title and by far its gutsiest.

It brought to an end Penrith’s record-breaking season, halting its winning streak at 17 but without the major prize to go with it.

Storm had the game’s first try in the fourth minute, when Tyrone May kicked the ball out of Justin Olam’s hands as he went to ground it after a spread to the left.

And while Penrith missed its chances, including one denied for a Stephen Crichton obstruction, Melbourne took full advantage.

After Cameron Smith made it 10-0 with two penalty goals, Suliasi Vunivalu summed up the night when he latched onto a lofted Cleary pass, escaped an attempted tackle and ran 85 metres to score.

At that point Penrith had enjoyed the bulk of the ball and 23 tackles on Storm’s line to just two at its own end, for absolutely no reward.

Smith then potentially scored the final try of his NRL career right on halftime when he regathered a ball batted out of his hands, the game looked over.

When Ryan Papenhuyzen sprinted 70 metres after the break to score untouched from a scrum the game looked gone, and had the statisticians searching for the record books.

But it was then the comeback began.

Brian To’o crossed for Penrith’s first when he ran onto an Isaah Yeo kick after an apparent obstruction, before Crichton reduced the margin further.

Panthers are finally on the board! But in VERY controversial decision.🏉

When Josh Mansour dotted down on the left wing with eight minutes to go and Hughes was binned, a miracle looked possible.

Cleary then skipped through the line in the dying seconds, just after Brandon Smith was also walked from the field.

However, it was too little too late, condemning the Panthers to just their second loss of the year and with little reward for one of the finest seasons in memory.

“I thought I let the boys down,” Cleary said.

“There were a few moments through the intercept and the one at halftime.

“Just let in too many ordinary tries.”

Melbourne is the most dominant team of the 21st century, however, none of its titles have had a backstory like this.

The players haven’t slept in their own beds since June, having been forced into camp firstly in Sydney before settling on the Sunshine Coast due to the COVID-19 outbreak in Melbourne.

It’s also Storm’s first premiership without all of the big three on the park, with Billy Slater and Cooper Cronk’s exit originally expected to signal its demise.

“With the conditions that we’ve been under, I think it’s a remarkable effort to be here tonight and get a victory,” captain Cameron Smith, 37, said after his record 430th game.

“We haven’t been home for about five months.

“We did it the hard way with 11 men in the end. Penrith were coming home with a wet sail.”

“I don’t get many (tries) in my career. It was a scrappy one but I’ll take anything I can get. It’s nice to get one in a grand final,” Smith said.

“But just to get the victory tonight after what’s been a challenging year, we’ll take that.”

Earlier, Brisbane’s NRLW side created history on Sunday night when it became the only club in Australia with a live premiership three-peat in a major national team sport.

The 20-10 win over Sydney Roosters at ANZ Stadium continued a stunning three-season period of dominance in the NRLW competition, in which time the Broncos have lost just one game.

Coach Kelvin Wright said he was in awe of what the Broncos has been able to achieve in a campaign in which most players have been unable to work and are quarantined at home just to play rugby league.

As the only Queensland-based team Brisbane has been flying in and out of NSW on game day, including on Sunday.

“They don’t get it easy either. I know they sacrifice a lot, but that doesn’t mean we let up on them,” Wright said.

“We demand a lot of our players all during the week in our training sessions.

“The sacrifices that we make have never been used as an excuse, so it’s well deserved.

“We’ve got four players out there that have all three, which is outstanding.

“Hopefully we can come back again next year and do it again, but it’s very sweet to do it this year and now that we’ve done it, it’s nice to be able to look back on history now that we have the three-peat.”

Continuing an era of excellence, the Broncos shot out to a 12-0 lead early but were pushed by a determined Roosters side at a wet ANZ Stadium.

Tries from Yasmin Meakes and Quincy Dodd got the Roosters within two points at halftime before the Broncos iced the final 30 minutes for their fifth win in a row in 2020.

It was a clean sweep for the Broncos, with skipper Ali Brigginshaw winning the Dally M Medal and second-rower Amber Hall being awarded the Karyn Murphy Medal for player of the decider.

It was the second grand final loss for the Roosters, who went down to the Broncos 34-12 in the inaugural NRLW season in 2018.

“The girls know what it feels like to lose a grand final and eight of them have done it in 2018 as well,” coach Jamie Feeney said.