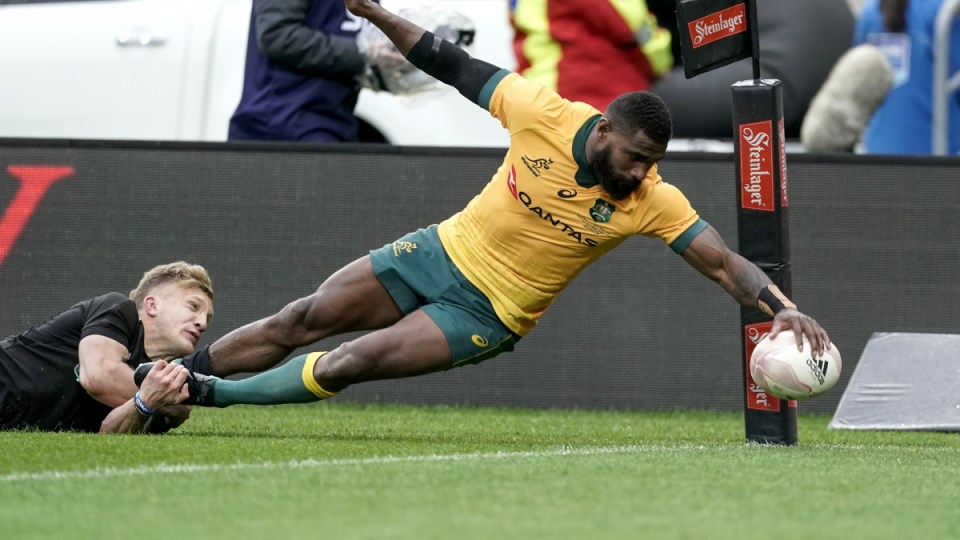 Australia's Marika Koroibete scores in the corner despite the efforts of Damian McKenzie in Sunday's Bledisloe Cup match. Photo: AP

Australia has come within a whisker of a Bledisloe Cup upset win in Wellington but had to settle for a 16-16 draw in their first Test under new coach Dave Rennie.

Reece Hodge had the chance to snatch a win with a 50m penalty shot after full time. The attempt had the distance but the shot heartbreakingly hit the upright and bounced back into play.

Play continued in a desperate scramble for a further nine minutes but neither side was able to find the winning points, with James O’Connor finally electing to boot the ball into touch and settle for the draw.

O’Connor kicked a penalty in the 63rd minute to split a 13-13 deadlock and it looked like it could be enough for Australia to break through for its first win in New Zealand since 2001.

It is a game of millimetres.

The Wallabies trailed 8-3 at half-time but their wingers Marika Koroibete and debutant Filipo Daugunu both scored to put the Australians on track for an unlikely victory.

Playing the first of four Bledisloe Cup Tests, the Australians looked a little shaky early on.

Australian touch judge Angus Gardner didn’t do the Wallabies any favours when he failed to raise his flag when Rieko Ioane put his foot on the line in the build up to the All Blacks’ first try.

The home side worked the ball wide to make room for Barrett to open the scoring in the eighth minute.

The Wallabies kept busy, dominating possession and territory in the first half with halfback Nic White mixing up his game to keep the All Blacks on their toes.

But their line-out was again a weakness, turning over three throws.

It looked like they had conceded a try right on half-time when hooker Folau Faingaa spilt a ball that was picked up by Sam Cane, but Ioane blew a certain try when he lost control of the ball as he tried to put it down one-handed.

The Wallabies continued to build into the game, with their defence a highlight, giving All Blacks playmaker Richie Mo’unga no room.

The superb showing means the Wallabies can dare to dream of winning back the Bledisloe Cup, heading next to Auckland’s Eden Park next Sunday on a high.