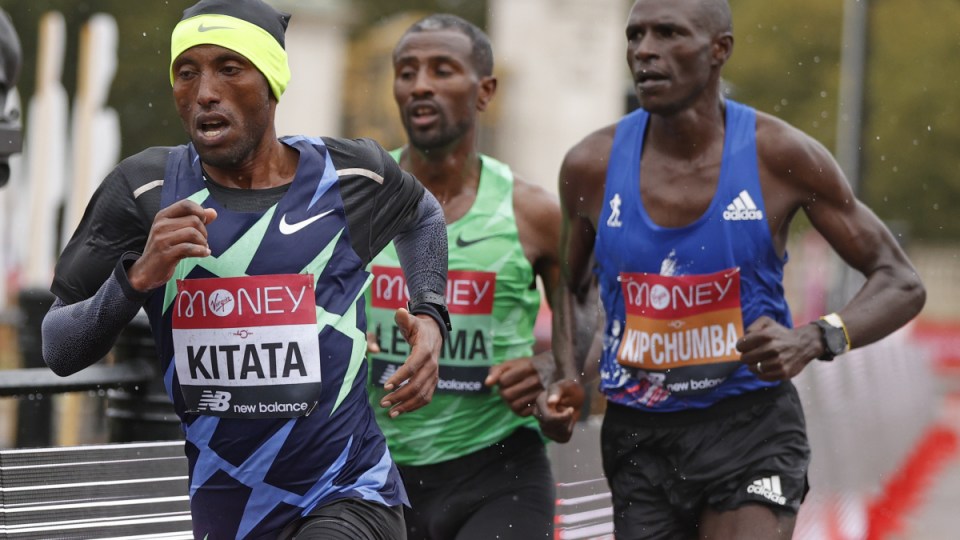 Eliud Kipchoge’s reign as the king of the London Marathon came to a shock end as Shura Kitata emerged from the rain and the gloom to become the new champion.

In a stunning upset Kipchoge, who had won all of his previous four London Marathons and had not lost over the distance in seven years, dropped alarmingly off the pace around the 22-mile mark.

The 35-year-old world record holder had no answer as a seven-strong lead group edged away from him, and he ended up finishing down in eighth.

Instead the title was up for grabs and it was Ethiopian Kitata who snatched it in two hours, five minutes and 41 seconds, pipping Kenya’s Vincent Kipchumba on the line after a thrilling sprint finish.

It wasn't to be for Eliud Kipchoge in the #LondonMarathon.

He's revealed what happened in the race… 👇

A faster race was predicted due to the nature of the course – 19.7 laps of St James’s Park rather than the traditional street route – but the incessant rain and chilly temperatures put paid to that.

With Kipchoge’s great rival Kenenisa Bekele, the second fastest marathon runner in history, missing through injury the stage looked set for a fifth victory for the Kenyan superstar.

But despite the slow pace he came up short and Kitata took full advantage, as Kipchoge was beaten for the first time since he came second in Berlin in 2013.

Earlier, Kenyan world record holder Brigid Kosgei earlier cruised to a dominant victory in the women’s race, overcoming her rivals to triumph in 2:18.58.

Running her first marathon since setting the world record of 2:14.04 in Chicago a year ago, Kosgei ran alongside compatriot Ruth Chepngetich until around the 20-mile mark, when she forged clear to open a lead of about 50 metres within a couple of minutes.

She then ran strongly for the rest of the race, looking comfortable, with American Sara Hall producing an incredible finish to snatch second place from world champion Chepngetich in 2:22.01 to the Kenyan’s 2:22.05.

The tiny Kosgei said it had been a tough day.

“It was wonderful to race but we haven’t been able to prepare well because of COVID, and because of the weather today it was a struggle up to the moment I finished,” she said.

Hall’s remarkable sprint finish meant she bettered her personal best by 15 seconds and meant she had $US15,000 ($A21,000) to donate to the Ethiopian children’s charity she is supporting with all her prize money.