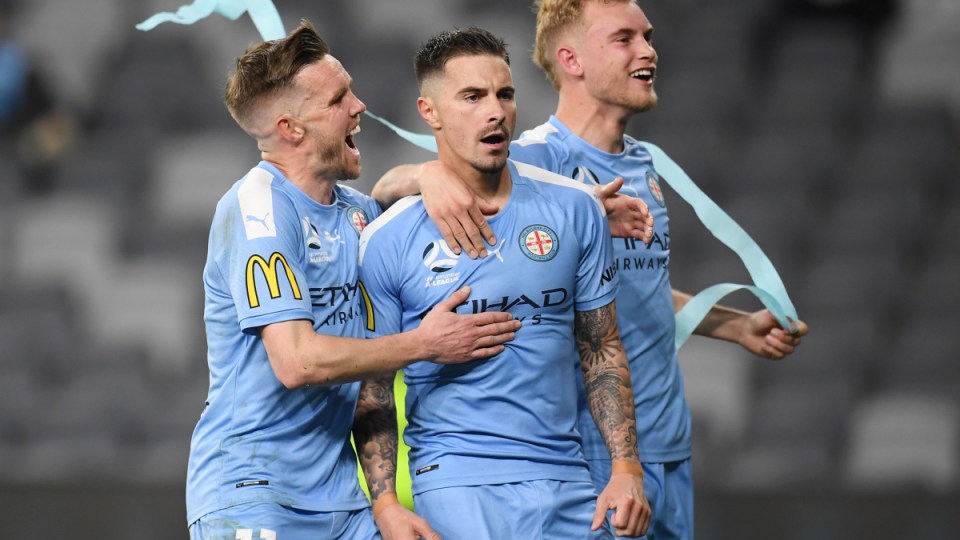 A-League champions Sydney FC has returned to form with a 2-0 semi-final win over Perth Glory to reach its fourth grand final in five seasons.

After some stuttering form since the resumption, the Premiers Plate winners rediscovered their mojo at Bankwest Stadium on Wednesday night in the penultimate match of their title defence to ease past Glory.

Milos Ninkovic and Adam Le Fondre got the first-half goals with the second coming after a horrendous goalkeeping blunder by Liam Reddy.

The Sky Blues will be seeking to become the first club to win five A-League championships when they play grand final debutants Melbourne City on Sunday.

The teams have booked their place in the Hyundai #ALeagueGF, now it's time to book yours too!

Melbourne City advanced to its maiden A-League grand final but it needed a second-half penalty to break the spirit of Western United.

The earlier semi-final on Wednesday between two well-matched sides remained on a knife edge until City’s Jamie Maclaren converted from the penalty spot on 68 minutes.

United defender Tomoki Imai turned the ball into his own net under heavy pressure from a corner with six minutes remaining as City ran out 2-0 victors at Bankwest Stadium – as the competition new boys finally saw their debut campaign come to an end.

Maclaren crashed home the spot kick for his 23rd goal of the season after the A-League’s golden boot was deemed to have been fouled after contact from Aaron Calver.

United was aiming to become just the second club to reach the A-League decider as an expansion club, but it was too tough an ask after it fell behind in its sixth match in just 19 days.

Milos Ninkovic pounces to give @SydneyFC the lead 💪

Formerly known as Melbourne Heart, City joined the A-League in 2010 and have benefited from the backing of a company whose portfolio of clubs is headlined by Manchester City.

It was a case of casting aside some demons for City, which had lost four of its past five finals matches.

“Today we showed we are strong mentally and this season has showed that this team can do very well,” City coach Erick Mombaerts said.

“We have had a very good season and I’m very happy that it is the first time we reach the final, but now we have one more game to win.

“It is not enough to reach the final, now we have to win this.”