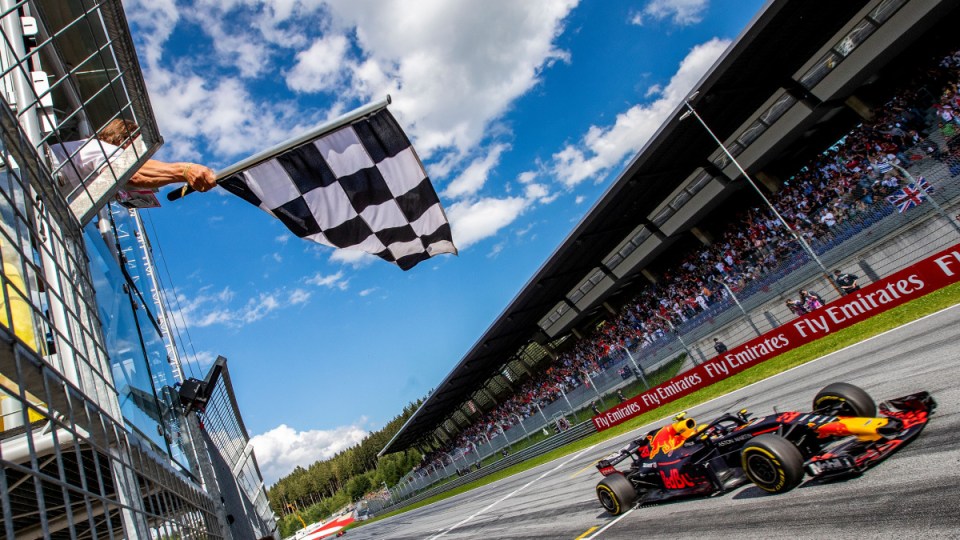 Max Verstappen takes the checkered flag in 2018 at the Spielberg circuit where racing will resume. Photo: AFP/Getty

The Formula One season will finally get under way with back-to-back races at the Austrian Grand Prix in July as part of an eight-race European swing.

The Red Bull Ring in Spielberg will host races on July 5 and 12, governing body FIA said in a statement on Tuesday.

The next race will be in Hungary on July 19 followed by consecutive races at the British GP at Silverstone on August 2 and 9 after the British government exempted elite sports from an upcoming quarantine on foreign visitors.

Further races are scheduled for Spain on August 16 and *Belgium on August 30, with Italy completing the European swing on September 6.

“Over the past two months Formula One has been working closely with all partners, authorities, the FIA and the 10 teams to create a revised calendar that will allow a return to racing in a way that is safe,” the FIA said.

“Due to the ongoing fluidity of the COVID-19 situation internationally, the details of the wider calendar will be finalised in the coming weeks.”

There will be no spectators allowed to attend, although there may be later in the year if health conditions allow it.

Four races have been cancelled this season because of the coronavirus pandemic – the season-opening Australian GP, the Monaco GP, the French GP and the Netherlands GP.

F1 remains hopeful of holding 15 to 18 of the scheduled 22 races by rearranging the six that were postponed and finishing the season in Bahrain and Abu Dhabi in December.

Red Bull team principal Christian Horner is excited about kicking off the season in Austria.

“We are pleased to be starting … at our home circuit. It has been a huge effort by all involved and the two events at the Red Bull Ring will be a blueprint for all other races to follow,” Horner said.

“With the first eight races of the calendar now confirmed we have some positive momentum. As a race team and racers, we are excited to get going again and put on a show for our fans.”

The FIA and F1 are working together on a plan to have strict safety measures in place at the races.