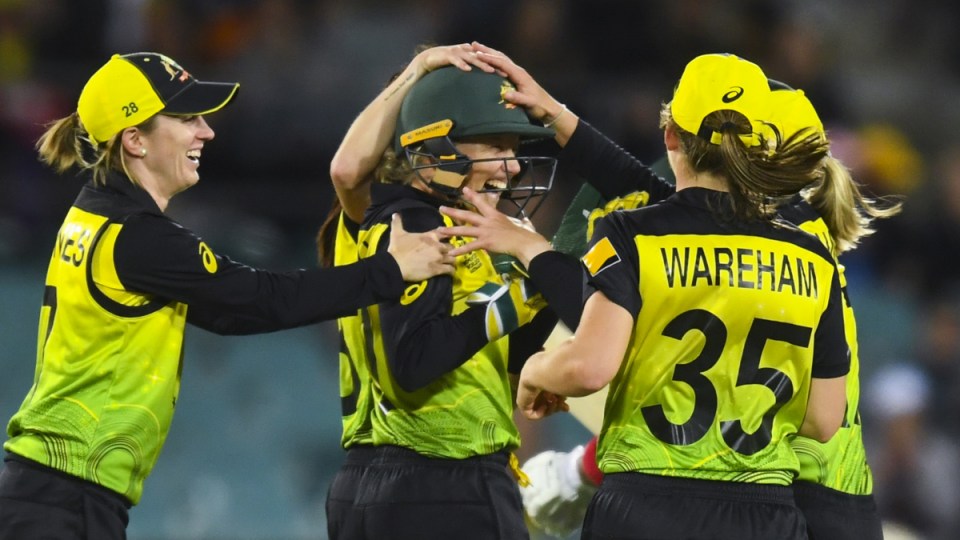 Alyssa Healy is mobbed by teammates after the wicket of Bangladesh's Fargana Hoque Pinky at Manuka Oval on Thursday night. Photo: AAP

Australia will decide its T20 World Cup finals fate in a mouth-watering clash against New Zealand, after thrashing Bangladesh by 86 runs in Canberra on Thursday. night.

Australia bounced back from a shock loss to India and a narrow win against Sri Lanka in its opening matches with a resounding victory at Manuka Oval.

But a trans-Tasman showdown now takes centre stage at Junction Oval, Melbourne, on Monday from 3pm.

But even if it loses, New Zealand could beat Australia in Melbourne on Monday and still progress on net run-rate.

A record-breaking night for Healy and Mooney at the top of Australia's order! #T20WorldCup pic.twitter.com/LtmEBPmgzq

The tournament hosts were in complete control from start to finish against Bangladesh after Meg Lanning won the toss.

Australia openers Alyssa Healy (83 off 53) and Beth Mooney (81 not out off 58) established the platform for an impregnable 1-189 in the first women]s T20 international between the two sides.

Healy and Mooney dispatched the Bangladesh attack to all corners of the ground as they ruthlessly compiled a 151-run opening stand to demoralise their opponents.

Healy had scored just 24 runs in six innings before the World Cup.

But she is now the tournament’s leading run-scorer with 134 runs at an average of 44.6 – stats enhanced by her latest assault, comprising 10 boundaries and three sixes.

Mooney blasted nine boundaries, while Ashleigh Gardner (22 off 9) continued the plunder after Healy’s departure in the 17th over.

Here's how Group A looks after today's games.

Who do you think will join India in the semi-finals? #T20WorldCup pic.twitter.com/gdpL0EalmS

Jess Jonassen (2-17) bowled Jahanara Alam (1) in the final over before consecutive run-outs completed a team hat-trick.

Fargana Hoque (36 off 35) and Nigar Sultana Joty (19 off 32) were the only Bangladesh batters to spend valuable time in the middle.

Aussies sweep aside Bangladesh, as NZ awaits in next must-win T20 encounter