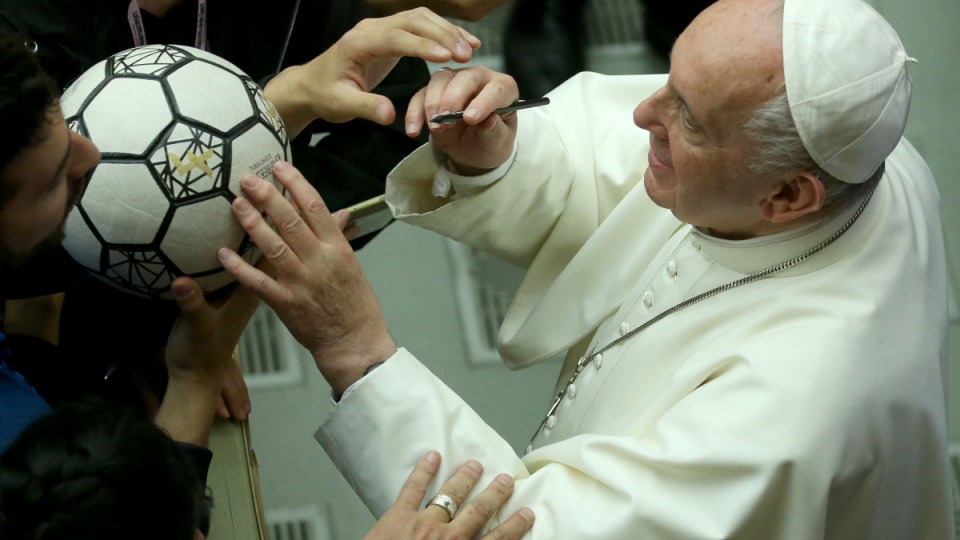 Straight to their poolroom: Pope Francis signs a ball during an audience with Italian Football Federation players. Photo: AAP 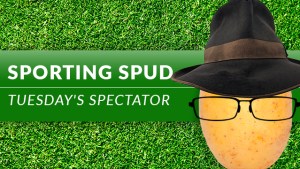 The recent TV mini-series The Two Popes may have rekindled interest in the football fanaticism of Pope Francis, but who knew the Pope had a pool room where he sent all his best sporting memorabilia?

While it’s highly unlikely that the current Pope and Pope Benedict XVI did hilariously watch a match together as depicted in the movie, it is true that the Argentinian pontiff has a long history of supporting soccer and, in particular, his favourite club San Lorenzo.

A cursory glance on YouTube shows the Pope lights up when pilgrims greeting him in St Peter’s Square offer cheers for San Lorenzo – a club that was formed when a Catholic priest became concerned about the children playing soccer in a busy street, so allowed them to play on church grounds.

And while the Pope may not have a pool table, he does have a Darryl Kerrigan-style sports memorabilia corner of the Vatican where he keeps all his favourite items from the world’s sport stars.

Those include signed photos and balls from a 2013 Italy v Argentina friendly where the Pope famously reminded the teams that “even though you are celebrities you are still men, in sport and in life”.

He urged the players to be role models and “spread goodness” saying “the good you do is extraordinary”.

In comments last September, Francis also told a group of gymnasts that sport cultivates values, saying it “becomes a formative experience that helps new generations to cultivate the values of life: Love for loyalty and justice, the taste for beauty and goodness, the search for freedom and solidarity”.

The Pope has clearly has never had to apply for an Australian government sport grant before an election.

Still, he has warned in the past that “the sports system sometimes appears to be conditioned by a logic of profit, by an exasperated competitive spirit and, unfortunately, also by violent attitudes”.

Pope Francis would thus never profit from his unique memorabilia collection, although if the pool room items were put up to auction you’d expect his lifetime honorary membership of the San Lorenzo de Almagro football club and the first soccer ball with a valve to be used in Argentina would be among the items fetching a hefty price.

Mix the ref’s whistle used in San Lorenzo de Almagro’s 1946 title win, along with a jersey signed by Argentine great Maradona, and it’s not hard to see where Pope Francis’s loyalties lie in the football world.

No jousting sticks though. They might be in the Vatican’s medieval section.

Buying up Kobe Bryant on eBay

Pope Francis may not have any Kobe Bryant memorabilia, but he’d better be quick if he wants to get some.

The sports memorabilia market may be awash with limited editions that are nothing of the sort, but it is an unfortunate rule of thumb that an early death of a great athlete will always drive prices higher.

Kobe Bryant’s tragic death in a helicopter crash last week has sent the price of his memorabilia skyrocketing, with eBay sellers reporting strong demand for anything related to the LA Lakers’ great.

The New York Times reported top New Jersey eBay seller Rick Probstein as having learned of Bryant’s death by the number of Kobe items that started selling immediately news of his death was reported.

“It’s horrible. It’s a horrible way to get news when you are getting it through sales.”

eBay currently has listed a towel that it is claimed Bryant wore around his shoulders while giving his post-match farewell speech to LA Lakers fans on April 16, 2016 – yours for a mere $US29,999 ($44,000).

Nick Kyrgios may have won over some doubters with his more mature outlook at this year’s Australian Open, but his exuberant personality still offered plenty of opportunity for a character study.

This ‘bad lip reading’ video via Twitter was clever, but still not possibly far from the truth given the streams of consciousness that often flow from the Australian.

Boxing set to get its latest dream bout

Australian boxing’s dream bout between Jeff Horn and Tim Tsyzu has been scheduled for April 22, with five different areas in contention to stage the fight.

Horn’s promoter Dean Lonergan told AAP the two camps had agreed on sticking points – including dropping demands for a rematch clause and a 10-round bout rather than 12.

Bankwest Stadium in Sydney and RAC Arena in Perth are among the venues under consideration to stage the junior middleweight contest.

Brisbane, Townsville and Canberra are other areas in with a chance of hosting the promotion, headlined by the bout between world-ranked middleweight and former WBO welterweight champion Horn and world-rated junior middleweight Tszyu.

The rise of Tsyzu, son of Kosta, has been a boom for the local industry, but his connections are keen to make the right moves to ensure his international potential.

‘‘Definitely my favourite court, my favourite stadium in the world, and I’m blessed to hold this trophy once again.’’

– After his eighth straight title at Melbourne Park, Novak Djokovic keeps giving to the fans that annually support his opponent