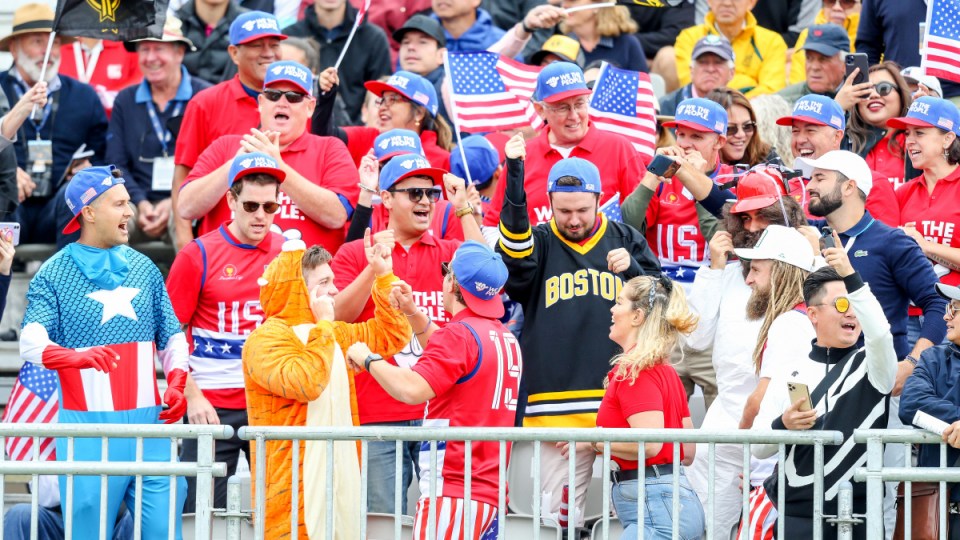 The American 'fanatics' at the Presidents Cup. Photo: AAP
analysis

Perhaps you just had to be there, but the images and reports back of the tone and tenor of the galleries at the Presidents Cup suggests that for all the opposition to Team USA, we Australians are increasingly aping our American friends in tone and drone.

It has to be said that Sporting Spud has only recently recovered from the culture shock of Collingwood fans chanting “USA USA” throughout the 2018 grand final every time Mason Cox got a kick.

So it was a shame then to see reports from Royal Melbourne on the weekend that some fans bedecked in American gear and going toe to toe with the usual green and gold ‘fanatics’ on the first tee were actually, well, other Australian ‘fanatics’.

It takes the wannabe American trend to a whole new level.

And, embarrassingly, it was noted by the international sports reporters in town to cover the Cup.

GolfDigest.com writer Shane Ryan, who also wrote an entire column about tasting Vegemite for the first time, tweeted that the group of red-white-and-blue “American” fans seated at the front row were, to his surprise, Australians.

If they truly were rent-a-crowd, as described by ABC sports writer Richard Hinds, it represents a whole new low for Australian sport, particularly with so many of our most cherished traditions and rituals being diminished year on year for fake razzle dazzle – Kisscam anyone?

Back in 2011, the images of the fanatics at the Presidents Cup were of Tiger Woods with green and gold clad blokes who were probably too old to be that excited.

At least the chants and the nationalistic nonsense seemed organic in nature.

Fast forward to 2019 and we have an older Tiger and a less wiser Australia.

The first tee looked more like a MAGA rally than an international sporting event.

Let’s be clear, the fanatics are boorish and unfunny at the best of times.

There really should be legislation to restrict them to the Australian Open tennis, where they can at least attract a laugh – it’s a truism of sport that tennis crowds will titter at anything.

Would you like some food poisoning with your heat?

The crowds at Perth’s Optus Stadium for the first Test were hardly huge, given the searing heat in the high 30s that most of the match was played in.

Still, if you’ve got a cold beer and a fresh chicken wrap, spending a day  enjoying one of the world’s swishest new stadiums is probably not a bad place to be … well, until they flash this sign on the scoreboard straight after your meal.

“If you have purchased any sandwiches, wraps or salads at the stadium today, please present back to the outlet of purchase immediately.”

The scare was apparently prompted by a piece of undercooked chicken in one meal and the West Australian newspaper reported that there had been no reports of illness, with fewer than 20 of the chicken wraps sold.

Given there were plenty of runs to be had on field, it was always likely that the cold beers, not the beers, were the biggest-selling consumable on the day.

And while the Australians cleaned up the Black Caps in cricket, the New Zealand teams spoiling for a fight keep coming to our shores.

Basketball’s Boomers will host their trans-Tasman rivals, the Tall Blacks, in the first game of the Asia Cup 2021 qualifiers on Thursday, February 20.

It is the first time the FIBA Asia Cup has included a qualifying phase, with the Boomers drawn in Group C alongside Guam, Hong Kong and New Zealand.

Teams will play each other twice, home and away, during the qualifying phase with three windows set for February 2020, November 2020 and February 2021.

It’s another fillip for the game in Australia, with the Boomers being unluckily fourth-placed at the World Cup and with the domestic competition enjoying a resurgence in crowds, sponsorship and International interest.

“[This year] has been a special year for the Australian Boomers finishing a courageous fourth at the FIBA world Cup, playing two home games against USA Basketball in front of a combined crowd of 103,297, defeating world-leading nations in USA and France, and finishing the year ranked as the No.3 team in the world,” said Basketball Australia boss Jerril Rechter.

The Boomers may be planning a big year leading up to the Olympics, but the big question remains … will NBA star Ben Simmons be there?

“I think Ben’s always said he wanted to be available for Tokyo. I don’t think there’s any doubt there,” BA head of performance Jan Stirling told AAP on Monday.

I haven’t heard anything contrary to that. That would be for him to determine.’’

Simmons, the 2017-18 NBA rookie of the year, did not play at the Rio Olympics in 2016 but declared he would play in this year’s World Cup before later withdrawing from the Boomers squad a month out from the tournament in China.

There’s a long and proud history of the interweb throwing up animal videos that make us go ‘awwww!’, but rarely has sporting Twitter seen something as good as this. Tim Cahill eat your heart out.

“I lost first round, in my disaster year. I will never forgive myself, never ever.”

– Retiring five-time World Darts champion Raymond Van Barneveld went out in the first round in the event on the weekend and seems intent on carrying with him the recent failure rather than the past triumphs.