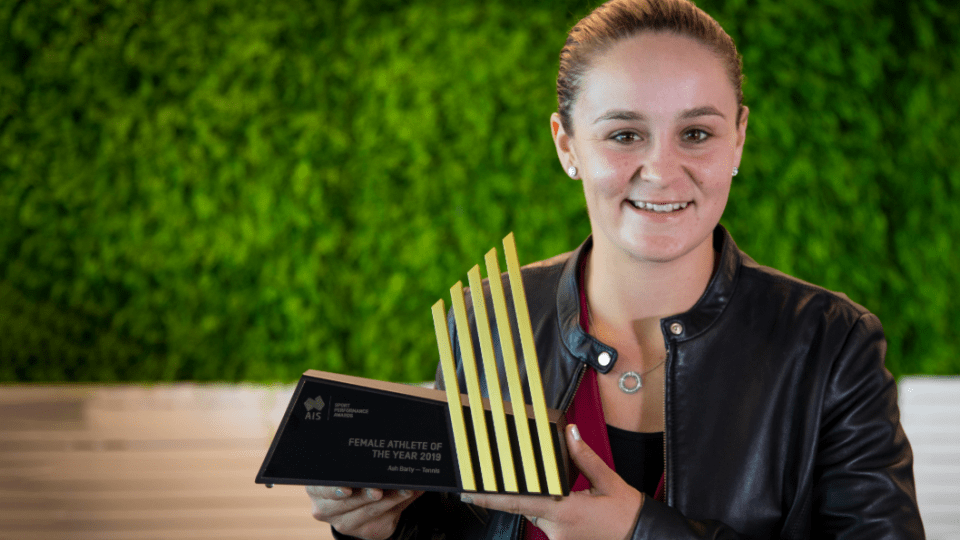 The French Open singles winner was named the Female Athlete of the Year, the ABC Sport Personality of the Year and awarded the Sporting Moment of the Year at The Star in Sydney on Tuesday night.

Almost 400 guests attended the black-tie gala event to celebrate the best of Australian high-performance sport, where Barty was hailed for her fair play, grace, humility and her exceptional all-court game

“We are a sporting nation, we love it and it is in our blood so to receive the votes and the support from the public is amazing,” Barty said.

The 23-year-old finished the season as world No.1 and took out the rich WTA Finals in China, the Miami Open and Birmingham Classic along the way.

WHAT A NIGHT AT THE #ASPAs!! 🏆👏 Thanks to everyone who attended and celebrated a huge 2019 in sport!

👉Read a summary of the night and all award winners at https://t.co/uMvzbe92r4

Almost 35,000 votes were cast for the ABC Sport Personality of the Year and Sporting Moment of the Year, with the Queenslander winning.

“It (French Open) was a highlight moment of the year, I really didn’t think I would get into that position, particularly at Roland Garros. I never thought that was my slam.

“That day in Paris for me was a perfect tennis match.

The continued excellence of Pyeongchang Winter Olympic Games flag bearer Scotty James was recognised with the Male Athlete of the Year honour.

The halfpipe rider won every major event he entered, including an unprecedented third consecutive halfpipe title at the World Championships in Park City, Utah.

War veteran turned sporting star Curtis McGrath capped off an outstanding season to be named Male Para-athlete of the Year.

Para-skier Melissa Perrine was awarded Female Para-athlete of the Year.

Australian Opals captain Jenna O’Hea collected the inaugural Athlete Community Engagement award, which celebrated the positive influence an athlete can have on the community.

It recognised O’Hea’s work with Lifeline Australia to raise awareness and fundraising for mental health and suicide prevention initiatives.

The future is also looking bright for 17-year old Amy Lawton, who was named Emerging Athlete of the Year after scoring on debut for the Hockeyroos in their Anzac Day clash in New Zealand.

Lawton will be one to watch before the 2020 Olympics in Tokyo.