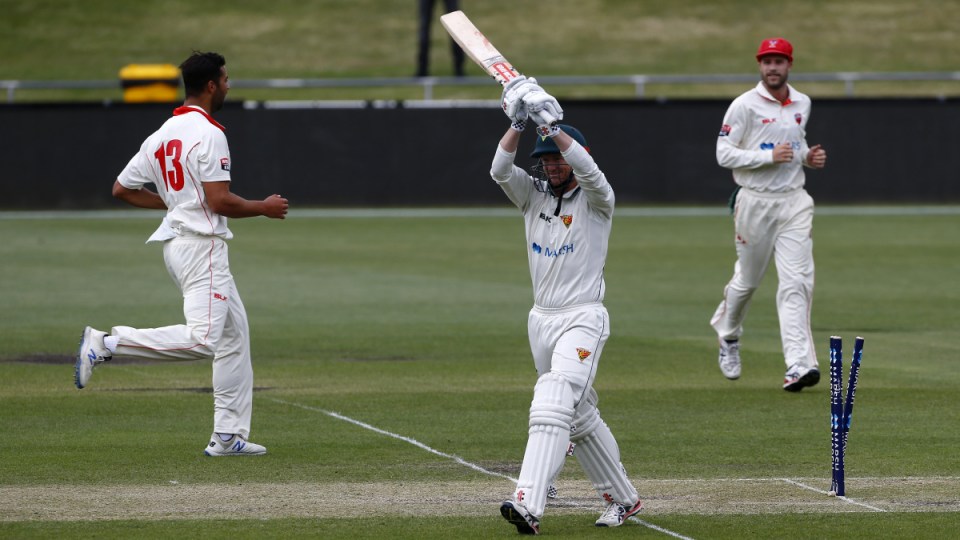 George Bailey is heading to a new life as an Australian cricket selector after his final innings for Tasmania ended with a duck in Hobart.

But spare a thought for the man who visited that result upon the veteran.

Bailey was clean bowled by the Redbacks’ Wes Agar for a golden duck after letting the ball go through.

It was enough for the wag operating the cricket.com.au twitter account to question whether Agar had just had a career-defining moment, given Bailey will be involved in all calls on Australian selection going forward.

At the end of the day Tasmania had fought its way back into the game and will resume at 6-241, an overall lead of 149 runs.

Bailey will still participate in the Big Bash this season, but ends his first-class career after 15 years and more than 10,000 runs, having played 90 one-day internationals, 30 Twenty 20 matches and five Tests for Australia.

Agar? Well, he may need to speak to George.

The WBBL final in front of a sell-out crowd in Brisbane on the weekend was a roaring success, but the fact that both Brisbane Heat and Adelaide Strikers turned out in shades of blue would have been enough to send any AFL executive into meltdown.

The AFL has long pushed for so-called ‘clash strips’ to ensure television viewers know which arms and legs belong to which player in the heat of battle.

One of the most egregious of these edicts is forcing Richmond and Essendon to change their iconic yellow and red sashes when the two power clubs meet … because who can tell yellow and red apart right?

Clash strips for the most part seem to have more to do with selling different styles of club jumpers to kids, but there is probably a case to be made that two opposing teams in a final of a developing competition should provide a little more colour with the movement.

In fact, a team with a moniker like Heat could perhaps have been better wearing either yellow or red, although more likely the former given skipper Kirby Short had taken a lead from AFL premiers Richmond.

Beth Mooney, who smacked 56 to lead Brisbane to victory, said Short’s leadership and the three-word slogan – Hungry but Humble – had been inspired by the top brass at Tigerland.

“Kirby’s done a lot of work with the Richmond leadership mentoring people there with Trent Cotchin and the coach (Damien Hardwick) and people like that and they sort of came up with that together,” Mooney said.

“She came back and wanted us to have something that made us not forget where we’ve come from and the people that have been before us, but make sure we don’t leave any stone unturned.”

Whatever stripes Heat wore on the weekend, the plan worked.

Philadelphia 76er Ben Simmons has proven his first NBA three-point shoot was no fluke, sinking another in Saturday’s career-high 34-point game against Cleveland Cavaliers, then following up a day later with another against Toronto Raptors 110-104.

The Australian also had 16 points, 11 rebounds and nine assists as the 76ers won Sunday’s clash to remain unbeaten at home this season.

Simmons’ coach Brett Brown has demanded the point guard develop his shooting game, not just star with his trademark dunks.

So what a relief for everyone when Simmons managed only his second career three-pointer with a uncontested catch-and-shoot effort from the left wing in the second quarter.

It prompted Brown to say after the match: “This is what I want”.

“I want a three-point shot per game, minimum. … He will be liberated. His world will open up and, in many ways, so will ours,” Brown said.

Simmons knows he has a way to go to meeting his coach’s expectations.

“I was locked in … I’m getting more comfortable learning my spots and just adjusting,” the 23-year-old said.

“I’m trying not to force it, trying to play the game I know how to play. Hard work pays off. Stay in the gym and keep working.”

In the NFL, the offensive woes of the injury-hit New England Patriots were highlighted recently by superstar Tom Brady’s fiery comments to teammates on the sidelines. With poor form putting a Super Bowl date in jeopardy, there has been more than one online sporting meme summing up the Patriots’ anaemic efforts.

“Our greatest coach – unarguably – rejected Australian football. Only Ange has the right to articulate why he made this decision but that such rejection existed is clear. His vision for the game in this country was too uncomfortable for too many.”

Sporting Spud: George Bailey heads to the selectors’ table after a golden duck