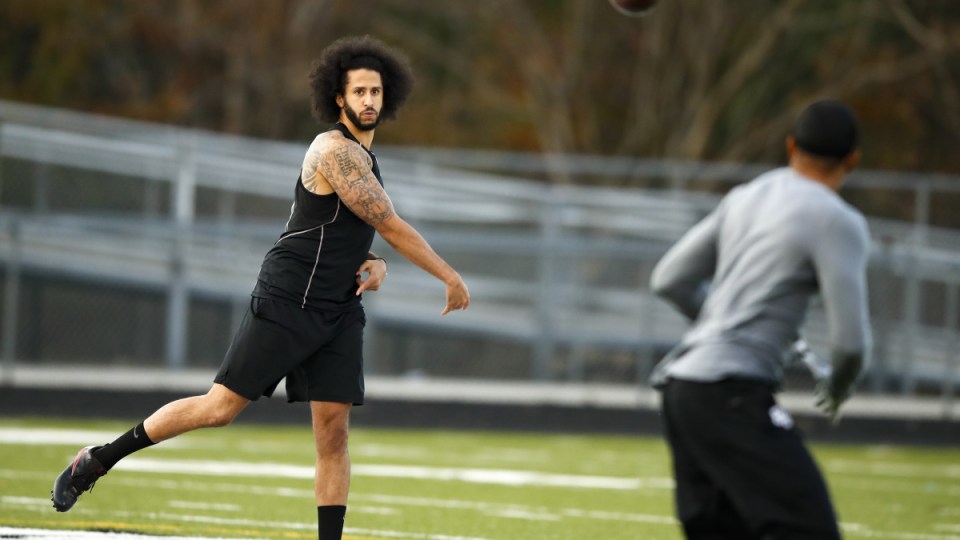 Racial injustice campaigner Colin Kaepernick has thrown down the gauntlet to NFL clubs, refusing to hold a private training session and instead taking it public as he looks towards a comeback.

The quarterback said he was ready to play anywhere after a long-awaited tryout at an Atlanta area high school on Saturday, with video posted on social media showing he has lost none of his deep throwing prowess.

“I’ve been ready for three years. I’ve been denied for three years,” said the former San Francisco 49er who made headlines by kneeling at games during the US anthem to protest against racial injustice.

He has said teams would not sign him because they wanted to distance themselves from the protests, which President Donald Trump criticised as unpatriotic and disrespectful.

“So we are waiting for the 32 owners, 32 teams and (league commissioner) Roger Goodell to stop running,” the 32-year-old said.

The NFL had arranged the tryout at the Atlanta Falcons training facility, but at the last minute the quarterback’s representatives moved the workout to a high school stadium.

Kaepernick said it was done so media could be present.

Live stream video showed Kaepernick making a variety of throws to a group of receivers to applause from onlookers.

His arm talent remains “elite” and is the same as when he came out of college, ESPN reported an NFL executive commenting after the workout, adding Kaepernick threw the ball well.

Kaepernick’s representatives made the move to the high school after accusing the league of not acting in a forthright manner in organising the workout.

Kaepernick also had requested all media be allowed into the workout to observe and film it, but the NFL denied the request, his representatives said in a statement.

The NFL said it was informed of Kaepernick’s decision 30 minutes before the workout was to begin.

Representatives from at least 25 of the NFL’s 32 teams had been scheduled to attend the workout. Several made it to the new location.

Kaepernick has played six seasons in the NFL and participated in six post-season games, including Super Bowl XLVII in 2013, when the 49ers lost 34-31 to Baltimore Ravens.

The Nevada product, who was a second-round draft pick by the 49ers in 2011, has passed for 12,271 yards in his career with 72 touchdowns and 30 interceptions.

NFL: Colin Kaepernick proves he can still throw and make the big statement