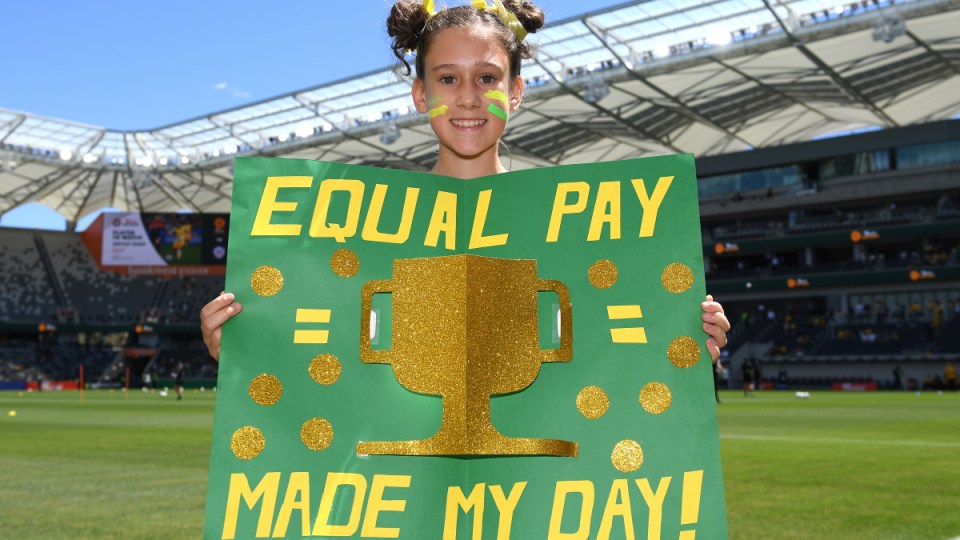 Kids take part in a 'Little Legends' lap ahead of the Womens International friendly soccer match between Australia and Chile in Sydney on November 9. Photo: AAP
analysis

The ABC took a lot of stick on Monday for its decision to abandon radio coverage of the Tokyo 2020 Olympics, but on Saturday the National broadcaster showed just how it can be a force for good in Australian sport.

As part of the new free -to-air deal for Australian soccer – read: football, if you are of that sensibility – the ABC offered up its first Matildas game on home soil.

With Sam Kerr scoring after only three minutes it was a brilliant start to the match. and the record crowd of 20,029 showed that the women’s game has come such a long way on the backs of the Matildas’ success.

The ABC’s panel discussions and post-match interviews were enlightening and offer a lot of upside for the game as a whole.

However, Matildas coach Ante Milicic warned that Australian women’s soccer risks slipping behind other nations without improvement in the W-League.

“I have been in Europe for the last couple of years and … I have seen what they have invested,” Milicic said. “And now, that is the challenge for us.

“With the (Australian pay) agreement that has been put in place, we know now that it’s a serious sport.

“But now it’s for us to build on that W-League. We need more games, we need more coaches available, we need better facilities.”

The 2-1 result against Chile was not the domination the Matildas had hoped for, but the debut of former Adelaide AFLW player Jenna McCormick gave Australia something extra to celebrate in the form of a potential new star at centre-back.

“It’s a very, very special day for me and I’m just glad the choices I’ve made throughout my life have led me to this moment,” McCormick told AAP.

This is the path I’m supposed to be on. And I’m just looking forward to hopefully being involved from now and however long into the future.’’

Given the growth in AFLW, the ability of the world game to offer women the chance to represent Australia remains a huge lure, with 26-year-old McCormick saying her next goal is the Olympic Games.

“Next one is to be at Tokyo. I want to be there so badly,” she said.

“It would obviously be amazing to go to an Olympics and represent your country.”

One soccer name already in Japan is former Socceroos coach Ange Postecoglou, who on Monday re-signed with his side Yokohama F. Marinos for the 2020 season as the club closes in on a J-League title.

Postecoglou has guided Yokohama to within reach of the top flight title and they sit second on the ladder with just three rounds left in the season.

The 54-year-old has been a hit in Yokohama for driving the five-time champions to within reach of a first success since 2004 with minimal funding as a foreign coach, as well as establishing an exciting brand of attacking football.

It’s an impressive improvement for the club, which finished 12th last season and narrowly avoided a relegation play-off in Postecoglou’s first campaign and he could attract attention from European clubs for his feat.

Postecoglou dramatically walked away as coach of the Socceroos just seven months before the 2018 World Cup in Brazil after guiding the team to the 2015 Asian Cup final.

No shots landed that were really different. Just something … happened. There are simply no words to describe how I am feeling right now.’’

– A shattered Michael Zerafa coming to grips with having landed the blow that saw his friend and sparring partner Dwight Ritchie collapse and die on the weekend.