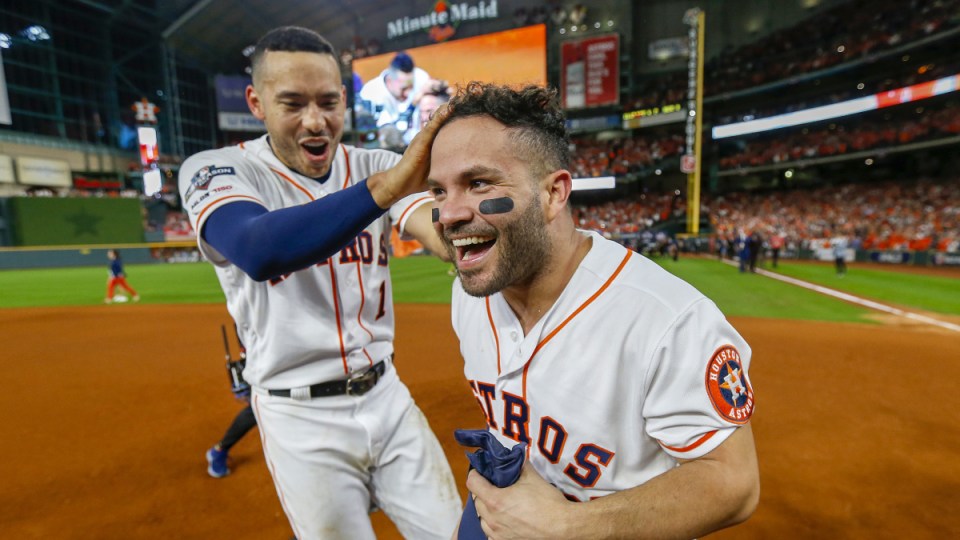 It was one of those sporting moments that will live forever in the minds of those who witnessed it – Houston’s Jose Altuve’s massive hit to shock the New York Yankees and send the Astros in the World Series.

The 29-year-old second baseman homered off Aroldis Chapman with two outs in the ninth inning as they outlasted the Yankees 6-4 on Saturday night to advance to the World Series for the second time in three years.

In a back-and-forth finish, DJ LeMahieu hit a tying, two-run shot off Astros closer Roberto Osuna in the top of the ninth.

But Altuve answered with a two-run drive to left-centre, setting off wild celebrations at Minute Maid Park in Downtown Houston and earning himself the American League Championship Series MVP.

It almost fell apart in the ninth.

Gio Urshela singled off Osuna leading off for his third hit of the game and LeMahieu put a ball into the first row of seats, centimetres over the glove of leaping George Springer, to tie it at 4.

Altuve, a spark plug touted as Houston’s heart and soul, didn’t let it get away.

“I get asked to describe Jose Altuve all the time,” manager AJ Hinch said. “I think MVP is what he is.”

Houston’s bullpen got a lift from flashy outfield defence.

Right fielder Josh Reddick dived for Brett Gardner’s liner for the second out of the sixth. An inning later, left fielder Michael Brantley laid out for Aaron Hicks’ floater and doubled off Aaron Judge at first.

Gurriel was one for 20 to start the series before his first-inning drive.

He jumped all over a high-and-tight fastball from Chad Green and his shot into the Crawford Boxes was his first connection this post-season.

It’s the third time Houston has eliminated New York in the past five post-seasons.

The Astros won the 2015 wildcard game and beat the Yankees in seven games in 2017 before winning their first title.

“I feel like we are on equal footing with them,” Yankees manager Aaron Boone said.

Unfortunately, sports can be a little bit cruel for the team that goes home.’’

Washington is seeking its first championship in the 51-season history of the Montreal Expos/Nationals franchise.

The original Washington Senators won their only championship in 1924 and last reached the World Series in 1933 before becoming the Minnesota Twins for the 1961 season.

Gary Sanchez had an RBI single in the second and Urshela homered in the fourth.

Alex Bregman gave the Astros an insurance run with an RBI on a forceout in the sixth.

The Yankees go without a World Series appearance in a calendar decade for the first time since the 1910s.