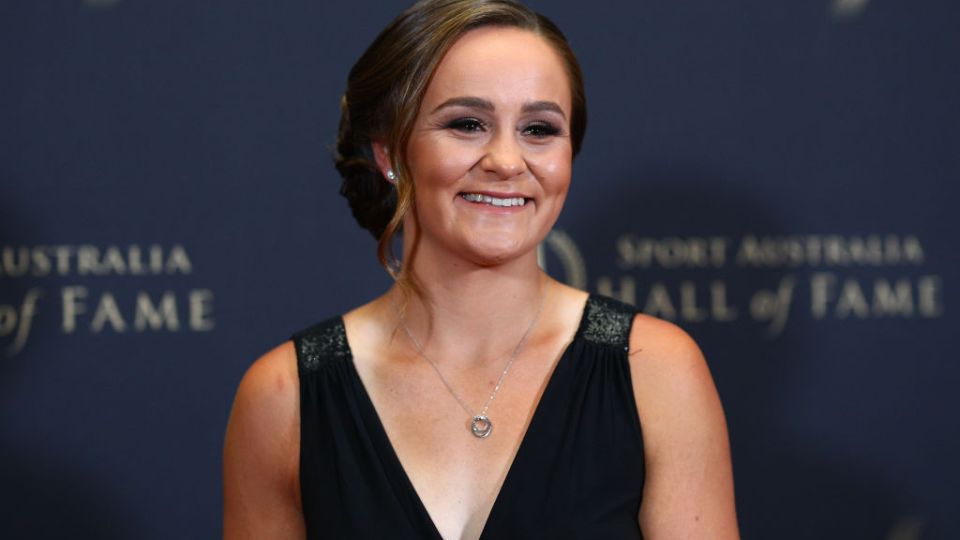 Ashy Barty has revealed the most important thing in life as she became the first female tennis player named Australia’s most inspiring sportsperson.

Barty was bestowed The Don Award at the Sport Australia Hall of Fame annual dinner on a history-making night in which Louise Sauvage was the first paralympian elevated to legend status.

The humble tennis star walked the red carpet after a stellar year in which she won the French Open and is on track to finish 2019 on the No.1 ranking which no Australian has achieved since Lleyton Hewitt in 2002.

The Don is presented annually to the sportsperson whose deeds most inspired the nation.

“My parents taught me that being a good person is the most important thing in life,” Barty said. “I try and live by that every day.

“When I started playing tennis, my first coach, Jim Joyce, had four rules: be a nice person, respect people and be respected, have fun – and if you can play tennis that’s a bonus. These are still with me today.

“At the end of the day, tennis is a game and it is meant to be fun. I try to walk away with a smile even after a tough day.”

Accepting her award on Thursday night, Barty said the lessons she learned in cricket when she famously switched to the sport in 2015-16 far outweighed any on-field performances.

“It was a time to find myself as a person and as a pretty ordinary cricketer,” she said.

“Tennis is definitely my calling.

“I made friends for a lifetime, an incredible group of friends outside of tennis, which is really nice, who couldn’t have cared whether I could hit a tennis ball or not.

“It was just really nice to be around quality people and I promised myself when I came back into the sport that I’d surround myself with only the best. That’s what I’ve been able to do.”

The French Open champion wants to end 2019 on a high, with the WTA finals in Shenzhen, China at the end of this month and will close the year in Perth, spearheading Australia’s Fed Cup final against France.

“He stuck with me from day dot when I came back (to tennis),” Barty said. “I had no ranking, I barely had a full bag of racquets and a full bag of gear.”

Barty said her achievements in the last 12 months had come as a surprise.

“It’s been incredibly bizarre … it’s been very unexpected,” she said.

“The beauty about it, the best part about it, is I don’t have one regret.”

Also making history was wheelchair athlete Louise Sauvage who became the first paralympian and 41st member of the hall of fame to achieve legend status.

The nine-time gold medallist from 1992 to 2004 was also the first Paralympian inducted into the SAHOF in 2007.

“It should be that Para-sport athletes can be seen and considered in the same light and be recognised in the same manner, so to be elevated is just huge,” she said.

“It’s tremendous and to be thought of alongside some of Australia’s great athletes, it’s just amazing company to be alongside them.”

Sauvage’s many achievements also include several world records on the track and 11 world titles, plus four Boston Marathon wins.

Winx and her connections won the Spirit Of Sport award.