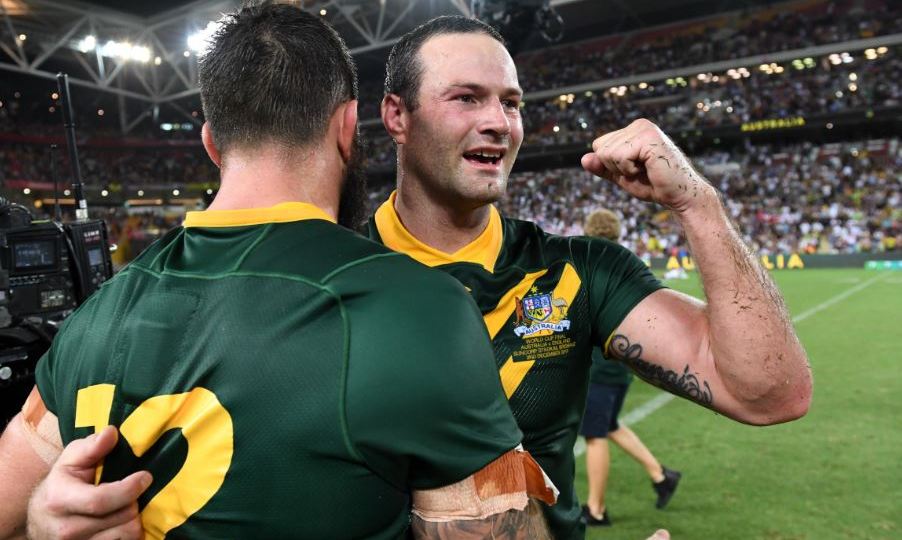 Australia have retained the Rugby League World Cup with an extraordinary 6-0 win over valiant England in the final at Brisbane’s Suncorp Stadium, a Test match destined to go down in the game’s folklore as one of the toughest and most absorbing ever played.

The Kangaroos nabbed their unlikely winning scoreline in the 15th minute when weight of possession saw back-rower Boyd Cordner crash over from a flat Michael Morgan pass, but arguably the biggest play of the decider came with 15 minutes to go.

The triumph marked the completion of the Kangaroos’ regeneration over the past two years under the tutelage of coach Mal Meninga.

When the record-breaking Queensland Origin mentor took the national reins in 2016, Australia had lost three straight Tests to New Zealand and slipped to No.2 in the world rankings.

Under Meninga, the green-and-golds have won 13 straight matches – but this was the first time they’ve been genuinely pushed.

Seven of Australia’s match-day 17 were blooded at Test level by Meninga over the last 18 months, but the hard-fought victory would have tasted sweetest for the only survivors of the 2013 RLWC success: Cameron Smith, Billy Slater and Cooper Cronk.

The iconic Melbourne Storm trio – possibly playing their last game together, with Cronk off to the Roosters – sealed an amazing season of accomplishment together by adding World Cup glory to their Origin series and NRL premiership wins.

And the all-time great triumvirate were integral to the eclipse of England, calmly steering the ship throughout and closing out the game with their typically professional and composed play during the nerve-shredding final quarter.

For Smith and Slater, the Kangaroos’ first World Cup final win in Australia in 40 years exorcised the demons of the shock loss to the Kiwis at the same venue in the 2008 decider.

“It’s amazing to finally win a World Cup on home soil, it’s been a long time and a lot of hard work has gone into it,” Smith said post-match.

“That was one of the toughest football games I’ve played in my entire career.

“It’s been a fairly hard road to this one over the last two years, we wanted to put ourselves back to number one. We’ve won back-to-back World Cups now and (I’m) very happy to have the Kangaroos as the best team in the world.”

Man-of-the-match Cordner’s try ultimately proved the difference, but the standout feature of the first half was England’s stinging and stout defence.

A heated melee after Smith was collared by England halfback Luke Gale (whose long kicking game was outstanding; less so at short range) emphasised the tension between the old rivals.

England’s rare attacking chances were squandered through poor execution and impatience, but their commitment without the ball restricted the scoreboard damage.

The contest opened up in the second stanza as errors permeated the visitors’ game – but the Kangaroos found another breakthrough frustratingly elusive despite several gilt-edged opportunities.

After the hour mark, the scoring chances started coming England’s way again. But Dugan’s big play aside, the underdogs shot themselves in the foot repeatedly in good field position.

Prop Tom Burgess coughed up the ball twice inside Australia’s half during the final 10 minutes, and after older brother and captain Sam Burgess procured one last-gasp crack at the line with a hit that jolted the ball free from Will Chambers, a bewildering grubber kick on the third tackle from Gale sealed England’s fate.

“It’s a tough one to take, but I think both teams played really well,” a physically and emotional drained Graham said.

“I know 6-0 doesn’t advertise a great game, but what a spectacle.”

Graham’s assessment summed up the 2017 World Cup final perfectly – a spectacular game that would have thrilled the purists, and a fitting end to a rollercoaster tournament that has done more to advance international rugby league’s standing than any other before it.