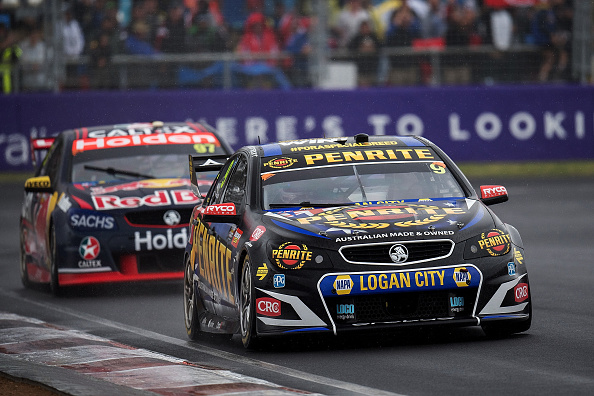 David Reynolds has won an incredible Bathurst 1000, triumphing in the Great Race around Mount Panorama after a rain-drenched marathon with an electric finish.

Reynolds and co-driver Luke Youlden pipped Scott Pye and Fabian Coulthard to the finish line after a clinical display of driving in soggy conditions for the first half of the race, only for the chaos to ensue once conditions dried up somewhat.

After a succession of crashes and safety cars in the closing stages, it was Reynolds who had the inside running to win a race that will live long in the memory, in a big win for the smaller teams.

All eyes were initially on Ford’s weekend pace-setter Scott McLaughlin, but his race ended before the halfway mark after an underwhelming series of engine problems.

Pole-sitter McLaughlin was the first to blink on the day, wobbling in the wet on the fourth lap to skid wide and drop five places.

The troubles would continue for McLaughlin and co-driver Alexandre Premat, forced to reset their dashboard while on the track after losing plenty of time on the straights – by lap 54 they were 20th fastest on the track.

Initially suspected as rain water in the electronics, Premat hauled the Ford Falcon into the pits to treat a broken exhaust head.

Chas Mostert’s race hit a speed bump when he spun his tyres in the pits early on, prompting a pit-lane penalty.

The first half of the race was dominated by the co-drivers, with Richie Sanaway skidding off the track in a tense duel with David Reynolds’ teammate, Luke Youlden.

But Stanaway provided immense support for Cameron Waters, working his way back into the lead in a 44-lap stint before pitting, showing tremendous handling in terrible conditions on the mountain.

Premat’s (and by extension McLaughlin’s) race came to a sluggish halt on lap 76 when their engine died on them, ending their race while prompting a safety car.

Once the safety car left, Mostert roared up the field, moving up to second place.

Mostert took the lead from Waters some 30 laps later, hitting the three fastest laps of the day in succession to scream into first place.

Suddenly, the track looked to be drying up, and it was Nick Percat’s turn to lock in the fastest laps, but that momentum stalled somewhat when Rick Kelly bumped into Mostert, bringing out the safety car and sending the top 10 into the pits.

Fabian Coulthard took a gamble and stayed out on the track, taking the lead before pitting a lap later in an effort to top up the tank as fuel calculations loomed with less than 30 laps remaining.

Holden’s James Moffat, who rode excellently for most of the race, saw his run end on the 140th lap as he slipped off the track into a tyre barrier.

That prompted another safety car, bringing the field in close with van Gisbergen leading. But the most dramatic lap of the race saw van Gisbergen hit the corner too hard upon the safety car’s departure, only to see second-placed Garth Tander skid off with him.

Tander looked to rejoin the fray immediately, but instead added another obstacle to the mix, nudging Mostert and sending a host of cars spinning.

Van Gisbergen recovered supremely, setting a fastest lap to race into third place, and looked to be gaining on Pye on each lap.

Twice he nearly slipped off the track in the process, and twice he recovered again in a rock-and-roll display of driving. But he chanced his luck one too many times, slipping off a turn into the beach, ripping his tyre off the rim to put him out of contention.

It left Reynolds in the clear with 10 laps remaining, having to hold off Pye and the ever-dangerous Coulthard.

It took a tremendous display of concentration to keep things simple, but Reynolds triumphed, even while dodging a stricken Mark Winterbottom’s Ford on the last lap, to seal an immense win for the underdogs of Supercars.