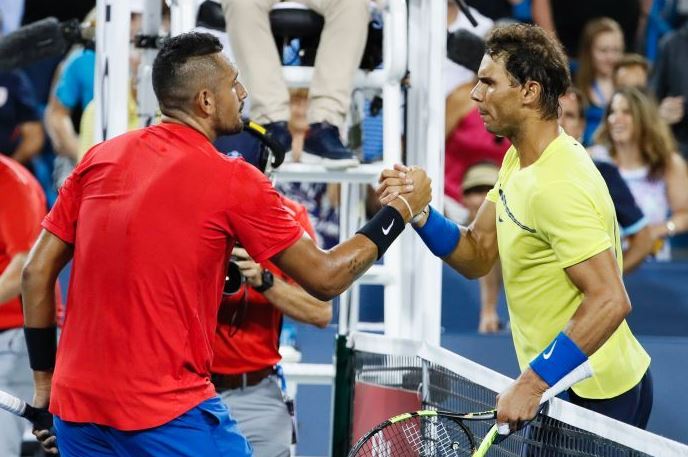 Nick Kyrgios presses the flesh with a defeated Rafael Nadal in Cincinnati.

Australia’s Nick Kyrgios has raced past soon-to-be world number one Rafael Nadal in straight sets to reach the semi-finals of the Cincinnati Open.

Showcasing everything brilliant and exciting about his mercurial style, Kyrgios battered Nadal 6-2, 7-5 in a dazzling display of serving and sizzling groundstrokes.

Kyrgios raced to a 4-0 lead thanks to a double-break in the first set, rattling winner after winner past Nadal.

The crowd briefly turned on Kyrgios when he played a nonchalant shot between his legs, allowing Nadal to finish off an easy winner, prompting boos from spectators who thought it disrespectful.

Nevertheless, at four games to the good, it was a message to Nadal the Canberran could do whatever he wanted in that set, and the Spaniard looked powerless to stop it.

His serve proved unplayable in the first, and his touch looked just as deft as he guided a delicate backhand return of serve past Nadal late on.

The first set finished at 6-2 in Kyrgios’s favour, wrapped up inside 25 minutes.
Nadal looked a different beast at the start of the second, with his serve back on target to hold to a 2-1 lead.

Forced to dig deep, Kyrgios worked his way to parity on serve, prompting deep, guttural shouts as the Australian psyched himself up.

Psychologically forcing the issue, Kyrgios switched the momentum back in his favour as he pressured Nadal into a mistake before converting the break to lead 3-2 in the second set.

Kyrgios had Nadal running to all corners of the court as he overpowered the Spaniard in the baseline rallies, before Nadal managed to hold serve to reduce arrears to 4-3.

Even when somewhat careless — as when he dished up a weak volley up at the net — Kyrgios still had some flair left in the tank to sneak a cheeky volleyed winner when Nadal looked set to smash home a winning forehand.

With both holding their serve for 5-4, Nadal hung tough to win a 19-shot rally, before watching on as Kyrgios double-faulted twice, including once on match point.

Roared on by the crowd, Nadal broke Kyrgios for the first time to level the match at 5-5.

But there would be no retreating into his shell this time, as Kyrgios threw down the gauntlet with a lightning quick forehand winner which tickled the tramline, en route to breaking Nadal to love.

Now 6-5 up, Kyrgios did the job on the second time of asking, serving his way to a deserved spot in the last four.

There was one last nice moment left for Kyrgios, as instead of the now traditional autograph on the court-side camera, he wrote ‘Barcelona’ with a loveheart, in solidarity with the victims of Thursday’s Las Ramblas attack.

Kyrgios will face Ferrer in the semi-finals, after the Spanish veteran upset Dominic Them 6-3, 6-3.

The highly rated Austrian was no match for the unseeded Ferrer, who broke serve four times.

Regardless of the defeat, Nadal will be confirmed as world number one next Monday when the ATP’s rankings points are updated, marking the fourth time in his career he’s reached the milestone, and the first time he’s reached the summit since 2008.