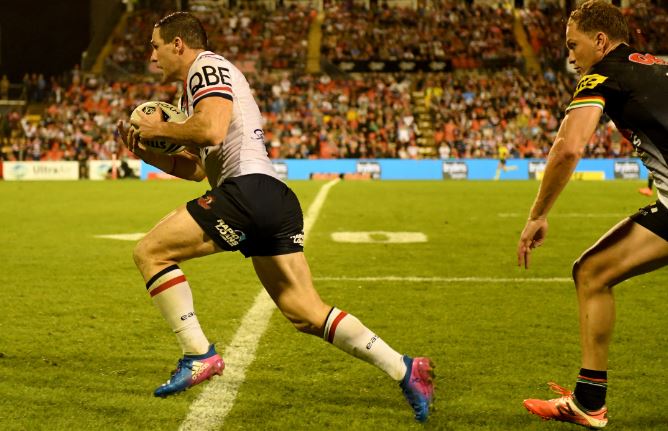 Michael Gordon during his days with the Roosters. Photo APP, Dead Lweins

NRL referees boss Tony Archer has conceded that what turned out to be the Sydney Roosters’ match-winning try in their 14-12 victory over Penrith on Saturday night shouldn’t have been awarded because of a forward pass.

Roosters fullback Michael Gordon scored his second try for the night in the 73rd minute at Pepper Stadium for the visitors to hit the front, however Archer later ruled that his officials failed to call back a pass that floated forward from Latrell Mitchell.

Mitchell’s quick pass to Daniel Tupou on the left edge led to the winger kicking through for Gordon to grubber ahead, regather and dive over for the crucial score.

“You can see a pass here from Latrell Mitchell, from the vision you can see that the touch judge is in good position to rule on the pass,” Archer said.

“After reviewing all the available angles and slowing the play up, I have determined that the pass is forward. It’s my expectation that the referees should have ruled that way.”

Penrith refused to criticise the referees after the match. 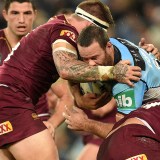 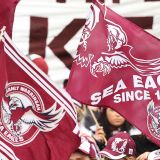 In the previous set to Gordon’s try, the Roosters fullback and Shaun Kenny-Dowall got their wires crossed that led to a spilt a bomb which Waqa Blake cleaned up to cross.

But after a video review, the try was disallowed because Matt Moylan and Tyrone Peachey were deemed offside.

It was one of a handful of game-turning incidents in the final ten minutes, which included Gordon pulling off a desperate try-saver on Peachey on his own goal line to save the game.

He hit the Panthers centre across the chest before bringing him down sharply, with the crowd appealing for a penalty for a high shot which could have potentially sent the game to golden point.

The referees, however, let it go and Griffin also refused to take issue with it.

“How’d you see it?” he said when asked about Mitchell’s pass to Tupou.
When pressed on Gordon’s tackle on Peachey, he offered: “I don’t know” while skipper Moylan shrugged his shoulders.

The Panthers are 1-2 however Griffin said they had plenty of cause to hold their heads high after a number of things didn’t go their way.
“As a club we were very courageous tonight,” Griffin said.

“We had injuries and a few things went against us, as everyone’s seen, I just really enjoyed watching the game. Without being technically correct, it was just a really tough performance.”

Gordon said he wasn’t in a position to comment on Mitchell’s pass but said: “In the grandstands they reckon every pass is forward.”

He also defended his tackle on Peachey, adamant it wasn’t high.

“It was straight across the shoulder,” he said. “Just cause he stepped so hard it probably looked dramatic. It was definitely not high.”