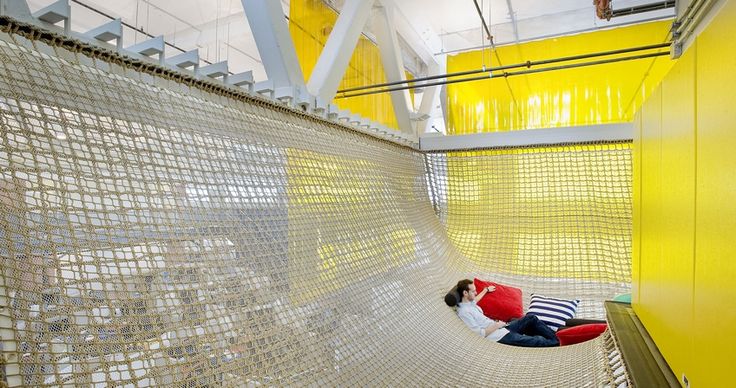 Office workers are spending more and more time on the job.

Perhaps that’s why clever companies with lots of cash are splurging on incredible spaces that make employees never want to leave.

Many of the offices that make the cut in the list are tech powerhouses eager to hold on to the startup feel of their youth – while making it clear that they’ve got tonnes of money now.

• Best Australian companies to work for
• How to: negotiate a pay rise
• The easiest way to rev up your CV

In fact, food seems to be one of the key identifiers of a great office – Google famously offers its staff three square meals a day on the house, plus a number of ‘micro kitchens’ dotted around the office stocked high with snack food.

Another popular perk is space to rest. Hammocks, beds, bubble baths and massage chairs all feature in the list below.

Food, leisure, rest – it’s enough to make you think it’s all part of a greater conspiracy to keep everyone at work all the time.

It’s not easy to cushion the blow of a 14-hour workday, but munching on unlimited snacks in a hammock just might do it.

Check out some cool office spaces below. Google – or should we say Alphabet – probably has 10 offices that deserve to make it onto this list. But it’s hard to go past its Zurich headquarters for these Jurassic Park-esque telephone eggs (pictured above) and massage spaces (below). Technology company Cisco’s employees hold their meetings in these coloured, wood octagons, while couches indent into walls for those who are after some individual peace and quiet.

The firm moved to these bigger headquarters in San Francisco when it acquired Wifi firm Meraki. The social product development company takes ideas submitted by users and turns them into products that are sold at Target and Home Depot, among others.

Food is paramount at Quirky too, as evidenced by the imitation old-school diner and large, modern kitchen. Here’s a homegrown entry. Health insurer Medibank’s Melbourne HQ was designed with the health of employees specifically in mind.

That’s why you see a labyrinth of stairs and ramps connecting the many work spaces, as well as a beautiful outdoor garden space for soaking up your daily quota of vitamin D. Ever heard of Couchsurfing? It’s basically an Airbnb-style business that has turned your old uni student habits into a viable business.

Its offices have certainly taken on the casual, couch vibe – swings and plants abound, as well as a whole lot of, well, couches. Think lots of under-dressed young people hanging out and sinking beanbags. It was impossible not to include another entry from the search giant, this time in Pittsburgh, USA.

The huge hammock (main picture, above) is undoubtedly the most novel drawcard within this office, as well as the usual Google fare, like free bars, restaurants and an almost painfully casual vibe.

There are rumours staff get free beef jerky, too.

These cool offices will inspire your work day