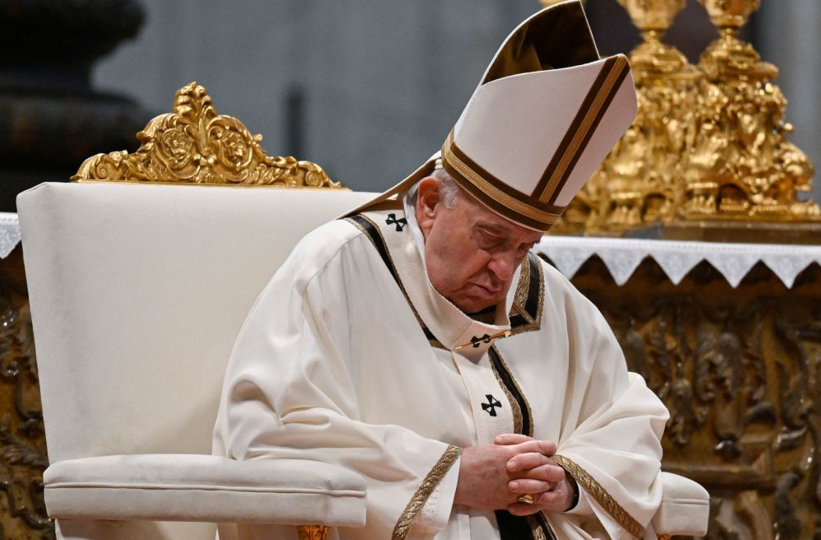 Pope Francis bows his head as he implores God to bring peace to Ukraine. Photo: Getty

In a striking plea for peace, an ailing Pope Francis has enlisted Ukrainian and Russia health workers to jointly bear the cross at the Easter service in Rome’s Colosseum.

The Pontiff defied criticism from Kyiv for the symbolic pairing at the annual torch-lit celebration of Christianity’s early martyrs put to death in the iconic stadium.

“Disarm the hand of brother raised against brother, so that where there is hatred, concord may flourish,” the Pope said.

The two women, one a nurse and the other a nursing student, are friends as well as colleagues at a Rome medical facility.

The return of Pope Francis to Rome’s Colosseum for the Good Friday procession came after two years when the event was suspended due to the COVID-19 pandemic. has taken place against the backdrop of the Russian invasion of Ukraine.

In deference to his ailing knee, the 85-year-old Argentine pontiff remained standing rather than kneel as he prayed in front of the tomb of the apostle in St. Peter’s Basilica.

Francis viewed the Stations of the Cross from a canopy before uttering a final prayer in which he asked God to “turn our rebellious hearts to your own heart, so that we may learn to pursue plans of peace, inspire adversaries to shake hands and taste mutual forgiveness.”

At the 13th Station of the Cross, Irina, who is from Ukraine, and her Russian friend, Albina, bore the crucifix together as a narrator recited a meditation.

“In the face of death, silence is the most eloquent of words,” the narrator said, inviting the 10,000 people present to take a moment and “pray for peace in the world.”