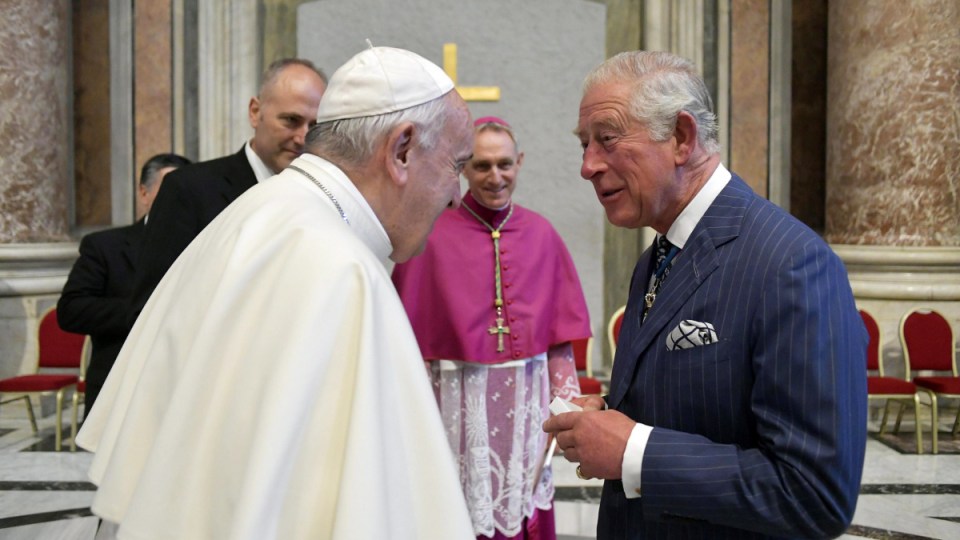 Pope Francis greets Prince Charles on a historic day at The Vatican on Sunday. Photo: AAP

Pope Francis has canonised Cardinal John Henry Newman, the 19th-century Anglican convert who became an immensely influential, unifying figure in both the Anglican and Catholic churches.

The Pope presided over Mass on Sunday in a packed St Peter’s Square to declare Cardinal Newman as a saint.

Among the luminaries on hand was Prince Charles, heir to the British throne, who penned a remarkable ode to Cardinal Newman that was published in the Vatican newspaper, L’Osservatore Romano.

Cardinal Newman, a theologian and poet, is admired by Catholics and Anglicans alike because he followed his conscience at great personal cost.

When he defected from the Church of England to the Catholic Church in 1845, he lost friends, work and even family ties, believing the truth he was searching for could only be found in the Catholic faith.

Anglicans split from Rome in 1534 when English King Henry VIII was refused a marriage annulment.

In the centuries that followed, Catholics in Britain were fined, discriminated against and killed for their faith.

In his editorial, Prince Charles said that Newman’s fearless, honest example was needed today in an era marked by division and intolerance “for the manner in which, at his best, he could advocate without accusation, could disagree without disrespect and, perhaps most of all, could see differences as places of encounter rather than exclusion”.

Cardinal Newman was one of the founders of the so-called Oxford Movement of the 1830s, which sought to revive certain Roman Catholic doctrines in the Church of England by looking back to the traditions of the earliest Christian church.

But he gave up a brilliant academic career at Oxford University and the pulpit of the university church to convert to Catholicism in 1845.

As a Catholic, he became one of the most influential theologians of the era, bringing elements of the Anglican church into his new faith tradition.

Yet Cardinal Newman’s legacy is complex for Anglicans and Catholics alike: Liberals like his emphasis on conscience, conservatives admire his submission to authority and his devotion to celibacy.

Some gay activists have claimed him as one of their own, as Cardinal Newman was buried in the same grave as the Rev. Ambrose St John, his companion of more than 30 years.

On the eve of his canonisation, one of the Vatican’s most senior English-speaking officials, Canadian Cardinal Marc Ouellet, declared that Cardinal Newman should be made a doctor of the church to honour the tremendous influence his writings had on the development of Christian doctrine.