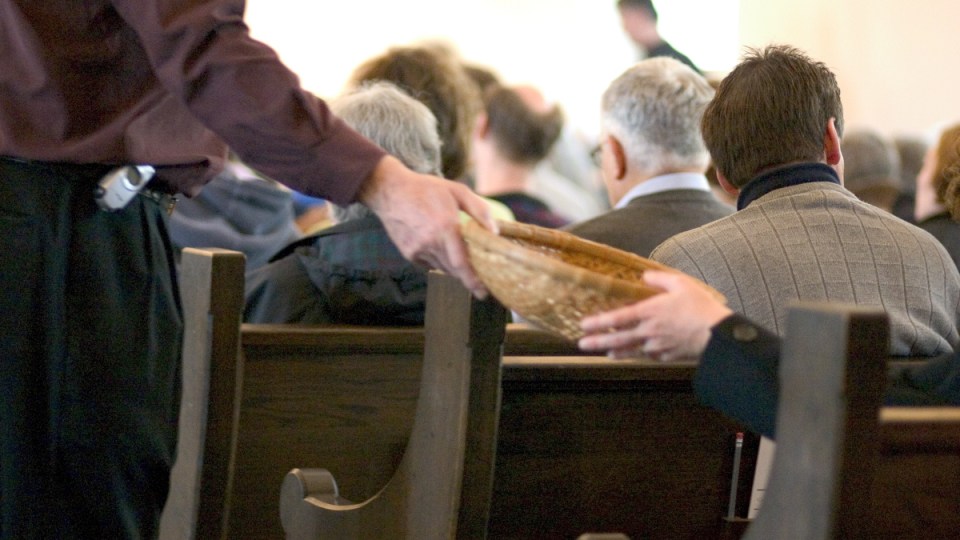 Before you donate, consider the kind of activities you might be funding. Photo: Getty
opinion

We went because of the kid. He’s only 11 years old, this godson of ours, still in the last days of innocence, that wonderful time before voices break and pimples erupt with the fury of Mount Vesuvius to herald entry into a harsher, more complicated world.

His mother is a lapsed churchgoer. No longer believes in the Old Man upstairs.

But she wanted her son confirmed as a Catholic in an understandable nod to family tradition and, more importantly, to ensure he remains in the warm bosom of a heavily subsidised private school.

So there we were, hundreds crammed into an old church, gulping fumes of sickly sweet incense while a two-hour Mass celebrated the confirmation of dozens of young boys and girls.

As it finally drew to a close, a familiar sound woke many of us from our Sunday afternoon stupor. It wasn’t the angelic voices of the choir. Not even a few Latin sentences mumbled by a tuneless bishop.

Nay, it was the sound of cash registers.

It was time for the collection plates to do the rounds. Except these were no ordinary plates. These had nets attached, some so large they must have been borrowed from passing fishing trawlers.

Been a while since the old church had enjoyed a full house like this and despite having staged Mass at least twice that day, this was an opportunity too good to pass up.

But as the day’s catch of coins and notes began to grow, I sat firmly on my wallet. I don’t mind giving. But handing over cash to a tax-exempt organisation with an estimated $30 billion Australian property portfolio?

Blindly donating to an institution that provides little transparency on how it spends the dough?

Problem is, I’ve seen where some of it goes.

Years ago I attended a pre-trial meeting to support a relative who, as a child, had been repeatedly sexually abused by a senior church official. The Catholic lawyer, no doubt partly funded by the proceeds of Sunday collection plates around the country, spent most of the meeting sneering at the evidence, belittling the victim and hiding behind obtuse technicalities.

His arrogance, let alone his lack of empathy, was breathtaking. But it was standard church operating procedure back then when confronted with that sort of allegation. Unleash the hounds of Hell. Attack. Antagonise. Intimidate.

You might say things have changed in the past few years. We’ve had the Royal Commission into Institutional Responses to Child Abuse, the establishment of a convoluted national redress scheme for victims as well as a never-ending parade of predictable apologies from leaders of most faiths, all promising that history will never repeat itself.

But for the most part it has been business as usual for our big religions. Some will be shelling out millions in compensation for decades to come but that amount will pale compared to their investments, assets, taxpayer subsidies and weekly cash flows courtesy of those collection plates.

It’s a trifling outcome when you consider that for more than half a century thousands of Australian lives were shattered and destroyed by predators claiming to be in God’s service.

Pedophiles were protected – in some cases deliberately moved on and even hidden from the law – by senior clergymen of many denominations.

As if this was not grotesque enough, many of these churches then stumped up millions of dollars to defend their twisted priests when they were finally hauled into court.

Surely the collection plate has become an anachronism for asset-rich organisations like our churches.

At the very least, is it too much to ask them to show us where the money goes, in the same way the rest of us must disclose our business to that other all-knowing and powerful entity controlling our lives – the Australian Tax Office?

If the churches step into the 21st century then the next time I’m dragged into one I might even offer up a donation.

More than happy to stump up some cash, as long as I know it’s paying the toll fee for all those predatory priests travelling down the highway to Hell.

Garry Linnell: It’s a sin to put money in the church collection plate