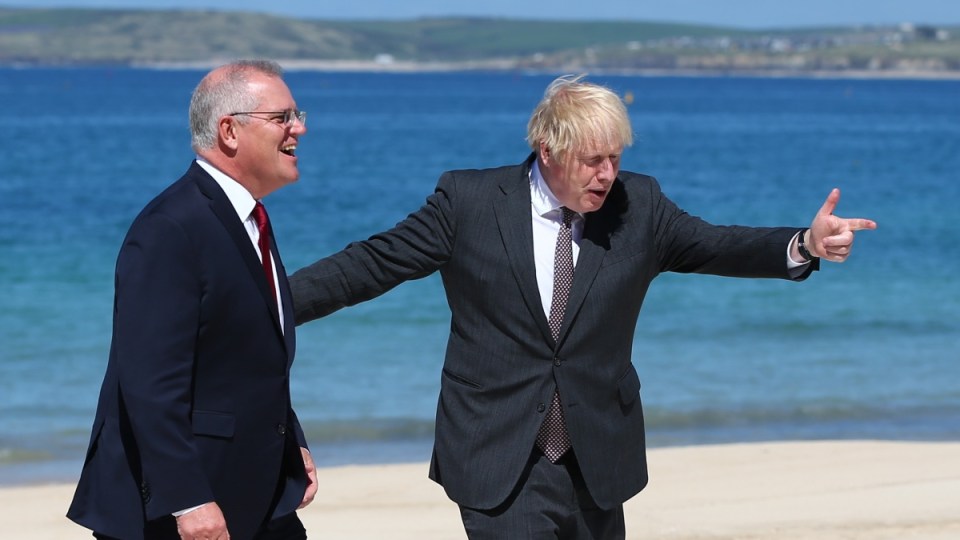 Scott Morrison and Boris Johnson have shared the same fate since their buddy act at the G7 summit in April. Photo: EPA
opinion

Cue the change in relationship with Donald Trump as we moved from Malcolm Turnbull to Scott Morrison, a kindred spirit. Or with France from Scott Morrison to Anthony Albanese – no explanation required.

Most obviously, what are the odds of the Conservative Party selecting another leader with such delusions of Churchillian grandeur, as keen to quixotically tilt at Chinese windmills on the other side of the earth when the party is domestically in dire straits and Russia has reignited a focus on Europe seldom seen since the end of World War Two.

Boris Johnson was a keen promoter of the AUKUS oddity – a desperate salesman hoping to flog nuclear submarines (and any other kit) as his ballyhooed post-Brexit trade agreements fail to deliver and the greater folly of Brexit unfolds for a declining power of decreasing international relevance.

In these circumstances, the chances must be slim that the next British PM will be as willing as Johnson (and Australia) to serve American policy in attempting to hobble the rise of China.

The hydra-headed monster that is Brexit – the Brexit that Boris Johnson delivered – has multiple jaws tearing at Britain’s wellbeing. The next occupant of Downing Street will have years of trying to clean up the mess that Boris leaves. Yes, there is a pattern here in breaking up the old band – Albanese cleaning up Morrison’s mess, Biden attempting to repair the damage of the Trump years, and now whoever takes over from Johnson.

Seeking a return to gunboat diplomacy in the South China Sea, parading as part of an Anglophone white man gang of three in their old colonial stamping grand, won’t do Britain any favours as it fumbles for economic ties beyond Europe.

The irrelevant and indiscrete but still dangerous Peter Dutton – the former Defence Minister happy to blab about claimed negotiations for the early effective absorption of the RAN into the US navy – has given the impression the source of Australia’s future nuclear-powered subs was a done deal. All the way with the USA!

Treating the UK as a non-starter wouldn’t win any friends there, a blunder not as bad as deceiving the French government, but still plain dumb if for no other reason than forsaking a negotiating position.

If AUKUS is to be anything more than an awkward acronym, it needs personal drive from the top. Johnson and Morrison were gung-ho, mustard-keen deputy-sheriffs.

The next British PM may well not be and it will be interesting to see where Albanese settles after his initial foray into feather-ruffling China to prove there was nothing of the Manchurian candidate about him.

(Brian Toohey has nailed the discordance of Albanese’s proclamation that China was trying to “build up alliances to undermine what has historically been the Western alliance in places like the Indo-Pacific”.)

Those who live in hope of Australia developing a more sophisticated and genuinely independent foreign policy – instead of the “whatever America says plus some” we’ve suffered under the Morrison government – have been buoyed by Penny Wong’s opening performances as Foreign Minister, but disappointed by Albanese banging the China drum in Europe, of all places.

If Britain achieves a decent Prime Minister, there would be one less voice on the sideline prioritising American policy in Asia.

The fundamental relations and cultural understanding between Australia and the UK doesn’t change much with the comings and goings of politicians, Britain’s decision to prefer the Common Market over the Commonwealth back in the day notwithstanding.

But Boris Johnson having to find new lodgings does change Australia’s political and diplomatic relationship with Britain – hopefully for the better.