The Albanese government has a classic Hobson’s Choice when it comes to the NDIS, writes Alan Kohler. Photo: TND
opinion

And yesterday Shorten laid out the beginnings of a plan to carry it out, but after nine years of poor administration and outright neglect of the NDIS by the Coalition, it’s just the beginning of a very big task.

Kennedy sounded an alarm about the budget in general in a speech to economists, saying that government spending will increase from an average of 24.8 per cent of GDP before the pandemic to 26.4 per cent in future, forever.

The massive cost of a burgeoning NDIS

He didn’t spell it out, but that is an expansion in the size of government over three years of $50 billion a year, rising with the growth in GDP from now on.

That is, if they’re lucky to keep it that – the growth in spending could be much more.

Close to half of that increase over the past three years is the National Disability Insurance Scheme and nobody has any idea what it will cost in future.

The NDIS was a wonderful innovation introduced by the Gillard government in March 2013 with a budget of $14.3 billion, funded by an increase in the Medicare levy of 0.5 per cent.

It was originally meant to control the cost of disability, after a report from Pricewaterhouse Coopers in 2011 found that the status quo would cost more.

But the cost forecasts were wrong, and if Shorten doesn’t get the scheme’s renovation right, he will find himself in a war with the nation’s disabled and their carers, which is not something any government wants.

The budget problems identified by Kennedy are not entirely about the NDIS, but they mostly are, as this chart from his speech shows: 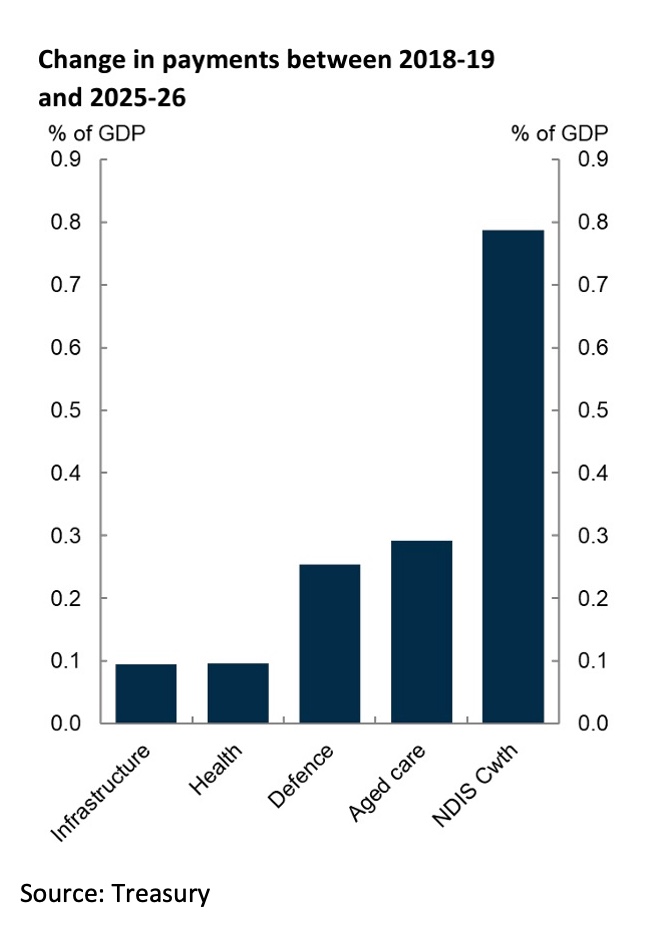 That 0.8 per cent represents an increase of about $20 billion.
But all earlier estimates of what the NDIS would cost were wrong – about the number of people needing help as well as the cost of looking after each of them.

The Productivity Commission thought the number would be 583,000 by 2030, but the National Disability Insurance Agency now says that’s likely to be 860,000, and the average cost has gone from $38,900 to $54,300 over the past four years, thanks largely to rorts and over-charging.

A review of the NDIS’s actuarial work by actuaries Taylor Fry estimates that the scheme could cost $74.2 billion by 2029-30, more than double what it costs now.

But Taylor Fry also said there is a “high degree of uncertainty in forecasting NDIS costs, particularly over the longer time horizon”.

‘NDIS was never meant to be the only way’

The fundamental problem with the NDIS is that according to the government’s Australian Institute of Health and Welfare, there are more than four million people with disability in Australia, yet only 518,668 of them are currently on the NDIS.

If all four million people were on it, the cost would be more than $200 billion instead of the current $34 billion and would consume half of all Commonwealth tax revenue.

But as Bill Shorten said yesterday, “the NDIS was never meant to be the only way we look after the disabled”.

But it means the number one fiscal task of Treasurer Jim Chalmers and Bill Shorten, and ultimately Prime Minister Anthony Albanese, will be to decide which of Australia’s more than four million disabled people miss out on the NDIS, and stay in the wasteland.

To say the least, this is a horrifying task for any politician and could end up crushing the new government – either by destroying the budget or by destroying Labor’s legitimacy as a caring left-wing government, or both, because the number of people on the NDIS grows too quickly and blows up the budget, but millions of disabled people are still left behind.

On the ABC’s Insiders program yesterday, Bill Shorten said he thinks the NDIS is sustainable and that he needs to restore trust in it.

His plan, sketched out in the interview, is to put a stop to the fraud and over-charging, including the $40 million a year spent on lawyers to fight appeals from rejected disabled people trying to get on the NDIS, make it more efficient and less bureaucratic and perhaps above all, to make sure it’s not a “wasteland” outside of the NDIS, as he put it.

“The second tier of services is inadequate, there’s really nothing after the NDIS,” he said.

On the government’s own numbers, there are 3.5 million disabled people in that wasteland, most of whom will never move into the rolling green hills of the NDIS.

Unsurprisingly, stories are constantly appearing about the deserving people being rejected for the NDIS.

People like Lisa Giles, who had to stop work in 2005 with multiple conditions including severe cervical spinal stenosis. She is on the Disability Support Pension but is “desperate” for more help, according to a report on the ABC.

Or Rita Barnett, who lives with myalgic encephalomyelitis/chronic fatigue syndrome (ME/CFS), a complex and disabling multi-system disorder characterised by severe and long-term fatigue, among other symptoms.

Both women have been knocked back by the NDIS.

Or Alicia Appleby, who has had two strokes, has a mild intellectual disability and needs constant care, but is living in the geriatric ward of a Melbourne hospital because of a dispute with the NDIS about her housing plan.

If Chalmers and Shorten don’t sort this out soon, stories like that will become the death of a thousand cuts.

There are clearly several things they have to do:

That last one is what Stephen Kennedy suggests. He briefly floats the idea of making “structural savings” in the budget elsewhere, but rightly dismisses that, and goes instead for raising more tax revenue.

Which taxes should be increased? Company taxes, he implied, not personal income tax, which he says is going to rise anyway with bracket creep (which should NOT be handed back through tax cuts).

He points out: “… we are experiencing a record level in the terms of trade and the banking sector is highly profitable.”

(Implied, but not stated, by Kennedy is the fact that the cap of 23.9 per cent of GDP on tax revenue, invented by the LNP coalition, will have to go – after all, spending is 26.4 per cent of GDP, so revenue has to be at least that).

The Australian Financial Review’s economics editor John Kehoe made a telling point on that subject the other day: “Norway has built a $US 1.3 trillion sovereign wealth fund from oil resources only a fraction of Australia’s riches in mining and energy. Australia has ended up with a $1 trillion debt.”

The Albanese government has a classic Hobson’s choice – confirm  Labor’s undeserved reputation as a high taxing party or be seen as heartless to the disabled.

It would be a terrible mistake to choose helping company profits over helping the disabled.

Alan Kohler: The NDIS could crush the Labor government