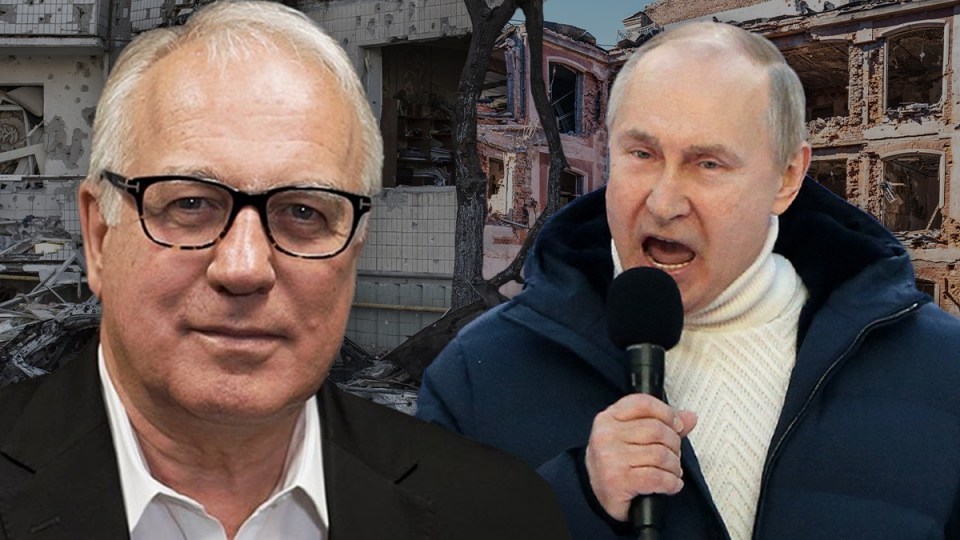 The economic repercussions of what Putin has done already will be immense, writes Alan Kohler. Photo: TND
opinion

The interviews with terrified, distraught people on buses out of Ukraine with nothing but the clothes on their backs, and images of bombed-out homes behind them, are very hard to watch.

We’re watching scenes resonant of some of the worst crimes in history, live, in full colour, that used to be seen only in newsreels of a grim, monochrome past.

The bombardment of Mariupol and Kharkiv, and now the outskirts of Kyiv, only make sense, beyond psychopathy, as a plan by Vladimir Putin to drive enough people out of Ukraine into neighbouring countries to cause a refugee crisis in Europe.

He must be hoping that it will force European countries, overwhelmed by the incoming numbers of destitute people, to press Ukraine President Volodomyr Zelensky and his soldiers to give up.

If so, it won’t work. Zelensky, supported by 90 per cent of Ukraine’s citizens, is clearly not for giving up, and Europe will absorb any number of Ukrainian refugees – the entire population of Ukraine if necessary – rather than go to war against a nuclear-armed madman.

It brings home the real problem of nuclear weapons: those that have them are freer to attack and murder their non-nuclear neighbours with impunity because everyone’s afraid to try to stop them, beyond using sanctions.
President Zelensky is right that what’s happening is a crime against humanity and should be stopped, but who’s going to risk that?

A few other questions come to mind. What will Putin do when the bombing and the refugee flood don’t bring capitulation?

Would NATO really go to war with Russia if he attacks one of its members? Would that mean a nuclear World War Three?

What happens to global inflation and food supplies when two major exporting economies are in ruins?

And are the millions of Ukrainian refugees flooding into Europe a dress rehearsal for what’s coming with climate change?

(The answer to that one is “yes”: Sydney-based Institute for Economics and Peace estimates that global warming could produce 1.2 billion refugees by 2050 because of resource scarcity and natural disasters, so 10 million displaced Ukrainians will seem small by comparison).

Most of Russia and Ukraine’s wheat exports – 12.5 per cent of global supplies – went to the Middle East and North Africa, led by Egypt and Turkey.

When these countries don’t get their usual shipments of wheat, will food shortages and price rises spark another round of revolts like the Arab Spring of 2011?

And if so, will we once again see millions of people trying to walk to western Europe through Turkey and Greece, or try to cross the Mediterranean towards Italy and Spain in tiny boats?

The economies of two of the world’s major exporters of food, energy and minerals are being destroyed, their output removed from the world markets.

This is not just supply-chain disruption as in the pandemic, or embargoes like the oil shocks of the 1970s, but the long-term loss of much of the world’s wheat and barley, oil, gas and a variety of important minerals.
It will take years to replace them and for prices to return to what they were.

It’s true that Australian wheat farmers are enjoying the windfall of $400 per tonne prices for their wheat without the drought that normally goes with that, but soaring fertiliser and diesel prices are absorbing a lot of it.

Everybody else is just getting higher prices for everything as higher transport costs flow through, and soon there’ll much higher interest rates as central banks dust off their inflation-fighting manuals after decades of fighting the lack of it.

For the moment, though, the war has come down to two competing pressures – the wretched human toll of Russia’s brutality versus the sanctions against it.

In a televised speech last week, Putin said the sanctions would force “deep structural changes in our economy”, but added that Russia would overcome the attempts to organise an “economic blitzkrieg”.

The remarkable new thing about these sanctions is the way the corporate world has joined in, a manifestation of the sudden dominance of ESG (environment social governance) in the business world.

More than 400 companies have now pulled out of Russia, many of them critical to the functioning of the economy, such as aircraft parts, and others just to the contentment of its people, like McDonald’s and Apple.

The question is: How long can Russia withstand this while getting bogged down militarily in Ukraine, before moving to what Tom Friedman in the New York Times calls Plan C.

(Plan A was a quick, easy victory, which didn’t work. Plan B, now in place, is civilian bombardment and millions of refugees).

Plan C, says Friedman, would be an attack on Poland to bring in NATO or split it because some members will want to fight Russia while others won’t. When that doesn’t work, Plan D is a nuclear bomb or chemical weapons, or both.

In fact, this week US President Biden suggested Putin may skip straight to chemical and biological weapons, and he also cited “evolving intelligence” that Russia is planning cyberattacks against US businesses and institutions.

Putin can’t actually win in Ukraine: The people will never accept a Russian puppet, especially now, so victory can only involve the possession of a smoking ruin, with Russian’s own economy also ruined by sanctions and ostracisation.

But it’s essential that Ukraine wins convincingly, not with a compromise truce or a stand-off.

Whatever happens from here, the economic repercussions of what Putin has done already will be immense, and will last a long time.

Whatever happens from here, Putin has already changed the world