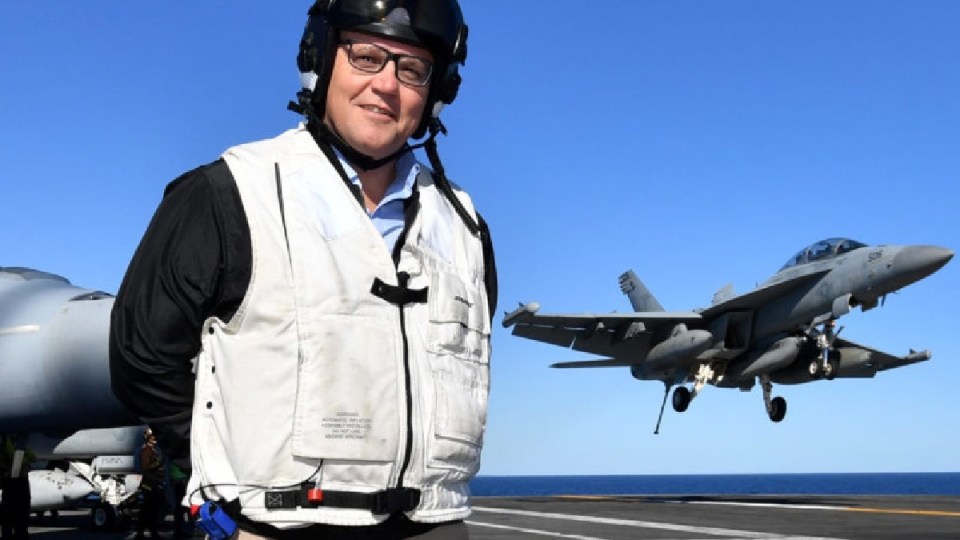 As Scott Morrison’s war talk speech to the Lowy Institute on Monday made clear, the Prime Minister wants a May election framed around national security.

Much of it was (to use a phrase from US political consultant Mike Murphy) crafted by that great speechwriting team Cut & Paste, some was overcooked hyperbole and the rest was a reheated gumbo of old Morrison themes.

He refashioned the “axis of evil” line used by former Republican President George W Bush in the 2002 State of the Union speech aimed at comparing the Axis Powers of World War II (Germany and Japan) with a modern-day alliance forming the fabled “green crescent” from Iran, through Iraq and Syria to Hezbollah in Lebanon and Gaza.

In World War II US President FD Roosevelt wanted a two-ocean war – in the Pacific and across the Atlantic. Morrison wants to spread the fear and insinuation of a ground war in Europe to the Indo-Pacific.

As much as Morrison’s often simplistic thesis reshaping Bush’s phrase to portray an arc of autocracy might have foundation – there is a genuine global threat to democracy – the complexities are many and don’t settle neatly in a sound bite.

First, Morrison’s world is simplistic: It’s all black and white and good and bad. More fundamentally, it’s God-fearing versus heathen.

Throughout his time as Prime Minister, Morrison has been a China hardliner, something taken to a rhetorically extreme level after the outbreak of Sars-Cov-2 in March 2020, when he had his Foreign Minister Marise Payne go out early to call for a full-scale inquiry into the origins of the pandemic.

The Chinese didn’t like much of what was said and done, but they were insulted deeply by the suggestion there should be inspectors with “weapons of mass destruction” probing powers.

As an ironic aside, the most comprehensive two studies on the pandemic origins this month pretty well ruled out the “lab leak” theory completely and settled to within the margin of error on the “it was the wild animals that did it” answer.

It shouldn’t be forgotten Morrison was taking a lead from the Trump White House in going down the “lab leak” rabbit hole.

The past two years have seen a Prime Minister willing to take any opportunity to stir emotions and anxieties over China, its presence and purported intentions.

The much-vaunted Quad grouping – the United States, Japan, India and Australia – has become a security alliance to the almost total exclusion of economic and other issues.

The AUKUS grouping – bringing together Australia with the US and the United Kingdom – has emerged, based initially around a nuclear-powered submarine deal worth tens of billions, but extending to sharing computing and other leading technologies from weapons development to space.

Much of this is reasonable policy and could be useful for our national interest.

However, putting the boilerplate rhetoric to one side, the Lowy speech was typical of a Morrison address.

It contained not much information you wouldn’t find in the Saturday editions of the purportedly serious newspapers.

It’s quite a skill to make a few thousand words on a new world order sound like someone reading the telephone book.

Even the teasing “east coast submarine base” announcement (to the extent it was one) was a reworking of accepted wisdom that has been the talk of defence circles in Canberra since the AUKUS reveal in September.

The three-location shortlist – Brisbane, Newcastle and Port Kembla – happens to coincide with electoral defensive and offensive positions for the Coalition in the coming elections, but let’s not get too cynical.

Also, did anyone think for every person who might like tough talk there would be more than a few who might be scared witless at the thought of living near a Chinese or Russian military target?

The absence of any meaningful thought from Morrison is underscored by a New York Times essay from British Prime Minister Boris Johnson setting out six serious ideas for dealing with the immediate issue of Ukraine.

Having Johnson outthink you is not a good look.

However, the major political point to be made is the Morrison speech is unlikely to shift the electoral dial.

Maybe a few voters will take notice, feel good about our Prime Minister’s performative thought-talk and walk back from leaving him at the polls.

Still, two things should not be forgotten.

First, the world has been in a state of constant crisis for more than 20 years.

Since Osama bin Laden ordered his suicide squad to hijack passenger jets and hit the economic and military might of the US, the world has been on tenterhooks.

We faced a global war on terror that first presented a seriously perceived existential threat to the Australian homeland – in a way that has not been seen again since and hopefully will not emerge any time soon.

The financial crisis in 2008 terrified people around the world, the electoral shocks of Brexit and Donald Trump, the global pandemic and now a brutal ground war in Eastern Europe have continued that state of crisis.

This has created a seemingly never-ending background noise that becomes part of the doom-scrolling of modern media consumption.

Unless there is a threat at the end of the street, people aren’t going to get too worked up about it.

This doesn’t discount the serious situation in Ukraine or the need for all world leaders to call out criminal behaviour like that of Vladimir Putin.

Second, people have concerns more immediate and pervasive than the gloom from Kyiv.

Ask around and here’s the list you’ll get: Petrol prices, cost of living, housing (especially rental costs), aged care, the NDIS, access to GPs and the scarcity of wage rises.

While Morrison was big on talking up the threat of global insecurity, he didn’t mention the impact of what are now almost certain oil and gas import bans from Russia ($3 a litre for petrol, anyone?) and what his government might do about either convincing people it was a price worth paying or finding other ways of alleviating the costs.

These are the issues the coming federal election will be fought on.

Whichever side has the best ideas and solutions to tackling what matters to people sitting around their kitchen table will start the contest in front.

Oh, what a lovely war: Morrison’s strutting on national security is sure to carry a cost