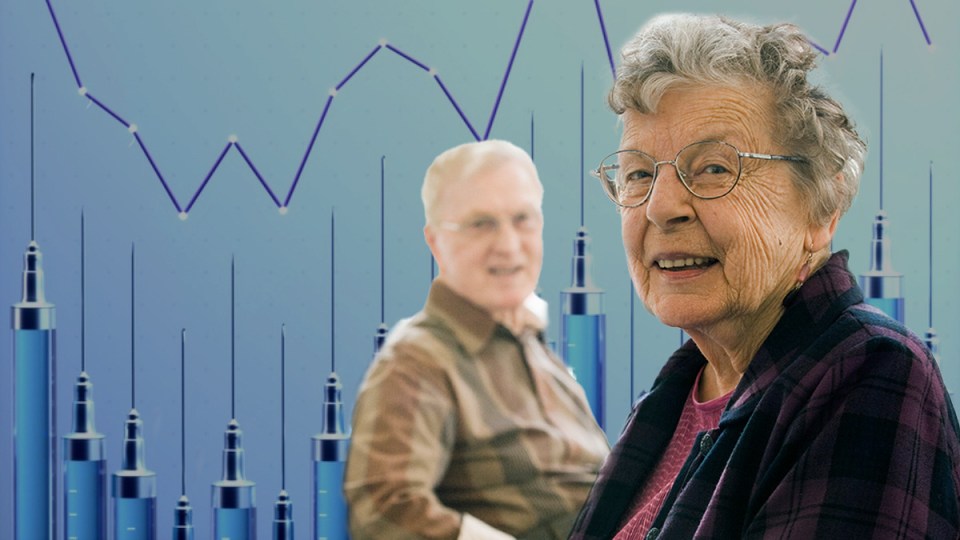 Shouldn’t we be focusing on ensuring that every person over 50 or 60 or 70 has had the vaccine, asks Madonna King.
opinion

In Victoria, more than 8000 new COVID-19 cases are recorded overnight.

This many are by PCR test and that many on a rapid antigen test. There are 50,000 active cases. And in one day this week, 18 people died.

Across the border in New South Wales and we are awash with statistics.

This many have received three doses of the vaccine, this many have only had one dose. This proportion of the population have a cough as their first symptom and that number report a sore throat.

Queensland fared worse. We’re told 1668 school-aged children have the virus, how that number had declined in the past 24 hours, and the breakdown between the jabbed and the un-jabbed.

Oh, and 21 of those deaths occurred in aged-care facilities.

In all states, the overall caseload was declining, we were told, and this is good news.

And as a reward, from today (Friday), restrictions would begin to be eased.

QR codes to be scrapped in some cases. In others density limits will be dumped and singing and dancing back on Friday night’s agenda. Masks will be torn up, and life will resume, as normal.

Have we lost every shred of perspective?

How many lives, among our over-50s, do we need to lose before we start to wonder whether we are doing this COVID thing right?

Two young people, aged 10 to 19, have lost their lives since the first case was reported in Australia. Twelve 20 to 29-year-olds have died. And at the other end of life?

That’s a total of 4114 Australians over 60 who have lost their lives as a direct result of this pandemic.

And yet, across Australia, we are now shouting the daily tallies with a grin and a sense of victory.

In Queensland, the Health Minister said the big increase in deaths on Thursday – 39 – was due to reporting numbers that had previously not been included.

No, Minister. They were due to COVID-19.

Authorities in one state announced how happy they were with the hospitalisation rate, which had fallen by more than 100 people in a week.

And yet, 71 families in three states – Victoria, NSW and Queensland – now begin the process of burying a loved one, who died on Thursday.

The most important figure, we are told, is that number of hospitalisations. But is it?

What about the lives of our parents and grandparents?

They might have had more time on Earth, and less time to go, but what makes it OK for us to dismiss that many deaths with the flick of a microphone switch?

Older age is a significant risk factor for serious illness and death for COVID-19.

But shouldn’t we then be focusing on that?

Ensuring our aged-care facilities are as healthy and COVID-resistant as possible; that every aged-care worker is vaccinated or sacked; that every person over 50 or 60 or 70 has had the vaccine, even if it is delivered to their front door.

That RATs, handed out freely at school now, are also available for our elderly at home.

Who decides now what’s old and what’s young? Why do we think it’s acceptable for a 65-year-old to die, but not a 45-year-old?

Would it be different if our premiers and health officials were all aged 70?

An easy answer might not be at the ready. But dumping our elderly is not any answer, at any age.

Madonna King: COVID-19 is a numbers game when it comes to protecting lives