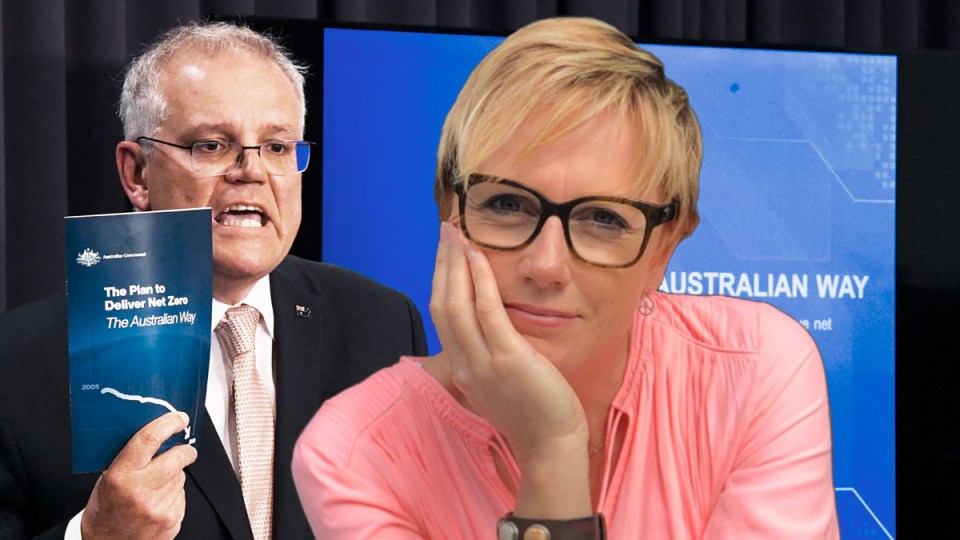 We have no new plan for 2030, after being dragged kicking and screaming to reach even a woolly 2050 net-zero promise. Photo: AAP/TND

If the Australian Way is backward, insular, and weak, I want no part of it.

And if the federal government’s climate Plan is ‘uniquely Australian’, it’s not an Australia that I like the look of.

Once an expat, I am aware of the tendency to mythologise Australia and the qualities of its people, as brave, boundary breaking and tough as nails.

Certainly we’ve, at times, shown ourselves to be fearful and inward looking.

But right now, with most Australians willing to show up and be the former, we’re being held back.

It’s depressing at best to consider the fact that instead of being the courageous young nation leading others into a new energy economy, with all our natural, financial, and human assets, that we are a global passenger.

While much of the rest of the world tries, with targets and deeply costed and mandated strategies, we have no new Plan for 2030, having been dragged kicking and screaming to reach even a woolly 2050 net-zero promise.

By way of comparison, the UK has decarbonised its economy faster than any country in the G7 in the last 20 years and, since 1990, has grown its economy by 78 per cent while reducing carbon emissions by 44 per cent.

Meanwhile, rather than taking energetic and urgent action, Australia’s Plan lazily falls back on projections that emissions will fall by up to 35 per cent by 2030, exceeding the federal target of 26 to 28 per cent that was set in 2015 via ‘momentum’.

Exceeding the target relies largely on what state governments are already doing, rather than the federal government Plan.

The UK is also aiming for the phasing out of unabated coal power by the 2030s, along with the rapid acceleration of renewable technology, and the end of the sale of new petrol and diesel cars by the end of the decade.

Meanwhile, we are stuck, with bonus nationalist rhetoric about the so-called Uniquely Australian Plan, which was cynically transactional in the making, contingent on a huge, vaguely framed pile of money for National Party seats and the return of a climate sceptic and coal advocate to cabinet.

In four days, world leaders will be put to the test at #COP26.

Their actions — or inactions — will show their seriousness about addressing the climate crisis.

Only with bold, ambitious 2030 targets, and new, concrete policies will we reverse this global emergency.

The central stated aim of COP26 in Glasgow over the next few days is to keep 1.5 degrees Celsius of global warming within reach. After a couple of decades of obfuscating, this is already close to opportunity lost and will require a dramatic escalation of effort to remain achievable.

If every country in the world did what we are doing, that target would evaporate.

After Antarctica, we are already the driest continent on earth and can therefore least afford warming.

But the world is carrying Australia.

“Climate change is truly an existential crisis that threatens not only us, but succeeding generations,” UN Secretary General Antonio Guterres said this week.

“There is one path forward. A 1.5-degree future is the only liveable future for humanity. Today at the UNGA (UN General Assembly) I urged leaders to get on with the job, before it’s too late.”

The UN race-to-zero campaign has 4400 businesses including banks, insurance companies and asset managers already committed, and the number is growing by the day.

Thankfully, while much of the Australian political debate revolves around the economic risks of doing something, business long ago realised that the cost of stuffing around will be much higher.

So, while politicians worry about re-election and how the Plan plays with the voters, business is considering the impact on jobs when the fossil fuel industry tanks, the hefty trade barriers that Australia can expect, and the impact on regional economies that could be the renewable energy hubs of our exciting future.

While the debate centres on how much regional Australia has to lose, there is much to gain.

Australia Institute analysis of modelling from Deloitte Access Economics released this week found that reducing emissions by even 46 per cent by 2030 would lead to $210 billion in economic benefits.

So, the Uniquely Australian Plan, could be harnessing sun and wind, utilising our massive open spaces, deep capital markets, and bright and hardworking people to lead us into a new world.

Instead, we have squibbed it out of fear.

That’s not our fear about rising seas, bushfires, cyclones and floods, by the way. That’s the fear of how voters might respond among a group of leaders whose jobs rely on three-year election cycles.

That is not The Australian Way.

Zoe Daniel: If the PM’s climate plan is ‘uniquely Australian’, that’s not my Australia