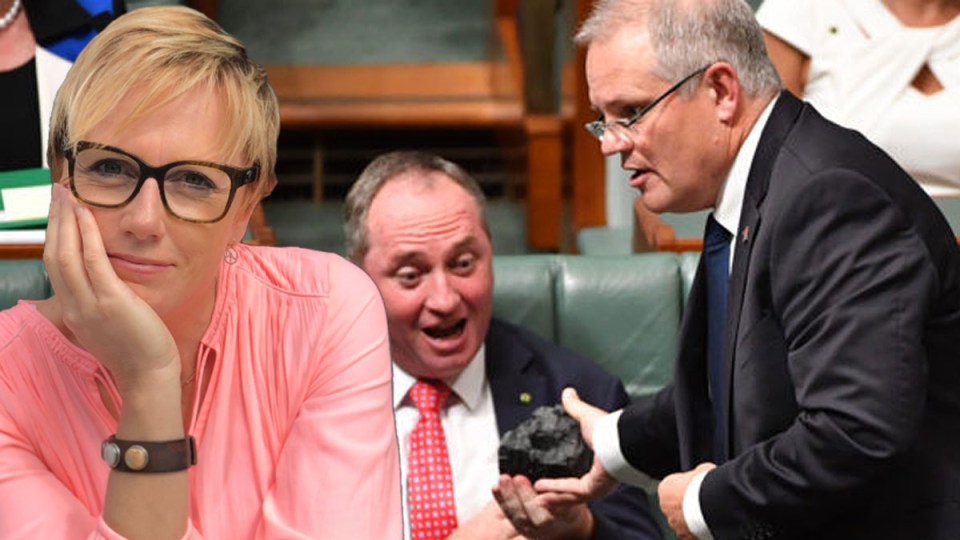 The Nationals appear to be beholden, not to climate-affected farmers, but the coal industry. Photo: TND/AAP

Australians could be forgiven for wondering: Just who is in charge?

With landmark climate talks in Glasgow now just two weeks away, the nation’s position on climate change appears to be in the hands of, not the Prime Minister and the Liberal Party, but a small band of National Party MPs led gregariously by Barnaby Joyce.

“Australia’s climate policy is being dictated by a former accountant in a cowboy hat,” reported CNN this week.

This is arguably true, and no doubt Joyce would retort that he’s just doing his job.

However, the Nationals appear to be beholden, not to the climate affected farmers that make up the bulk of their support base, but the coal industry and a party cohort that’s reliant on voters in those communities.

It puts the Prime Minister in an invidious position; under domestic and international pressure to attend the summit (from the likes of Prince Charles, no less), on the brink of an election, and aware of the need to put some substantive climate policy on the table to placate portions of the population that are way ahead of him in mindset.

And yet, with polling reflecting precarious support for the LNP, especially in perennially COVID-paused Victoria, loss of voters in seats that rely on the coal industry could prove disastrous.

The government is stuck between a lump of coal and a hard place, but it really has only one choice to avoid being seen as weak.

So, you can bet that after some hustling from both sides, there will soon be an announcement that Australia will commit to net zero by 2050.

This will be trumpeted from the rooftops in a manner designed to elicit sighs of relief from mums and dads around the country who are anxious about the future of their children.

Some will say that this is a turning point for Australia after years of inertia around climate policy. But if it’s not accompanied by enforceable, non-political targets, it will be spin.

We have dithered so much that accelerated action is now required. Beware of politicians who deliver a vaguely framed net zero by 2050 statement and then sit back as if the work is done.

The rest of the world, including our own state governments, are now focused on 2030 as a target for meaningful reductions in carbon emissions.

This means a cut in emissions of up to 74 per cent by 2030 for Australia to adhere to the global target of keeping warming below 1.5 degrees.

New research this week from the non-profit group Climateworks says that to hit this mark 70 to 79 per cent of the nation’s electricity must come from renewable energy by 2030.

Apparently, this can be done. A separate CSIRO-backed report this week suggests that 91 per cent renewable energy by 2030 is possible.

The projections suggest that state government policies will reduce emissions reduction by more than 40 per cent.

New South Wales and South Australia are both targeting a 50 per cent reduction by 2030, Victoria is looking at 45 to 50 per cent and Tasmania, with its hydro power and majestic forests, will legislate for net zero by 2030. Queensland has a 30 per cent target, while the federal government doddles along with a target of 26-28 per cent, relying on the states to do the hard work.

By 2050, both the Prime Minister and Barnaby Joyce will be in their eighties.

It will be the children of now who will pay the price for the fact that climate policy has been politically weaponised and therefore stalled for so long. There is no more time for waiting and obfuscating.

“We’re not going to achieve net zero in the cafes, dinner parties and wine bars of our inner cities,” the Prime Minister famously said earlier this year.

“It will be won in places like the Pilbara, the Hunter, Gladstone, Portland, Whyalla, Bell Bay, the Riverina. In the factories of our regional towns and outer suburbs.”

Perhaps, but unlike policy, climate change itself will not be stalled by rhetoric. And without adequate thought and strategy our rural and regional communities will be devastated as the rest of the world turns away from the industries that support them.

Climate is finally the talk of both town and country. The question is, who is controlling the conversation?

Climate is finally the talk of Australia, but who is controlling the conversation?