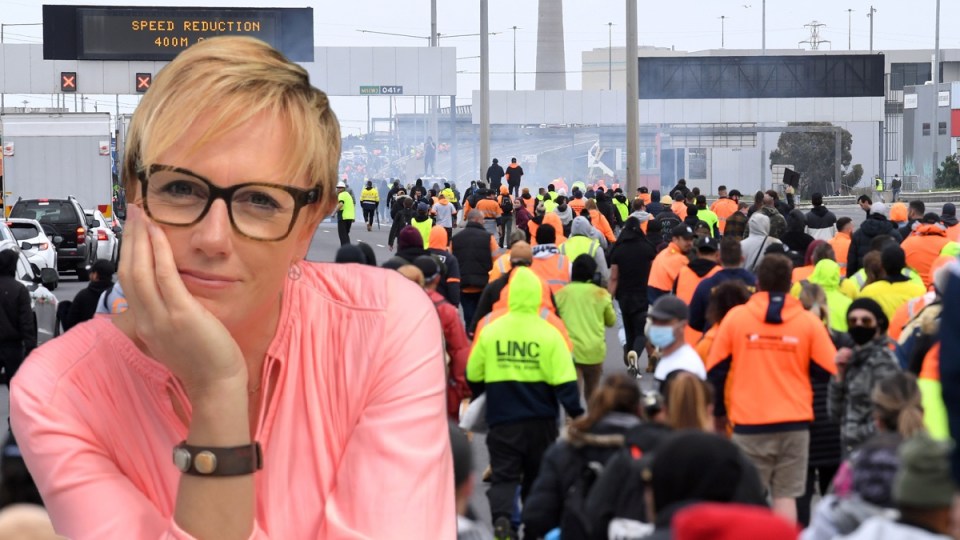 There were shades of Trumpism in Melbourne this week as a hi-vis-helmeted mob (of largely white men) took their anger to the streets.

More than one Trump-Pence flag was seen amid the crowd, along with a red MAGA cap or two. The disparate group of unionists, anti-vaxxers, anarchists, right wingers (including Proud Boys and neo-Nazis) and general troublemakers shut down parts of a city already crippled by COVID-19.

Their agenda, apparently initially sparked by suspension of access to tea rooms and mandated vaccination due to viral spread in the construction sector, was hijacked. It morphed into a general protest against authority, targeted at lockdowns, government, police and even the construction union.

It’s a weird thing when the left becomes the right, focused on liberty and individual rights, but it’s something that Trump and his backers mobilised deftly. America’s blue-collar workers were once the heart of the left wing. Feeling abandoned as their party embraced inner-city progressives, so called ‘woke’ attitudes were expertly weaponised into elitism by Trump’s strategists.

They herded the workers further to the right through a mix of nationalist populism about regaining control from the rich and powerful, and misinformation.

Flourishing in the web’s dark corners

This strategy has since been co-opted by opportunistic misfits who seek to fan aggression and use it to mobilise and flush out the disenfranchised and the dissatisfied from the dark corners of the web.

As we have seen in the United States, there will be a fringe that takes the instructions literally.

This shocked the world when it spilt over at the US Capitol in January, but it had long been evident to reporters who had been on the receiving end of spit and bile from Trump supporters screaming “fake news” and “enemy of the people” into the faces of the press.

They had bought in to the hate speech and conspiracies that were so carefully seeded over time by Donald Trump. Erosion of trust in the system is a powerful weapon, for either a populist American politician or a loosely framed group of anarchists Down Under.

Ironically, it causes those who claim they are seeking to regain control to cede it to a motley collection of leaders, often without a clear end game beyond being seen to have exerted power over authority.

In Melbourne a comparatively small group of protesters clashed with police and attacked reporters for the sake of their so-called beliefs, in what exactly remains unclear beyond ‘don’t tell me what to do’.

Labelling this group as right wing is too simplistic.

The lines between left and right are blurring. Both are vulnerable to opportunists who use social media to inflame anger and elevate individualism, plant conspiracies, and create a sense of impending doom among those on both sides who are struggling for validation.

Meanwhile, those outside the mob ask; how did we get here, and what was the point again?

‘The workers, united, will never be defeated’ was a common unionist chant back in the day.

But this is not that.

While there are more than 300,000 construction workers in Victoria, estimates suggest that only around two thousand were on the streets of Melbourne this week.

They get a lot of attention from the media, and you can find their supporters in the threads on the socials and in particular internet forums. Anti-vaxxers feature strongly.

But with the bulk of Victorians unable to attend their places of work, even the initial tea party protests in the street attracted little mainstream sympathy, let alone taking over the Shrine of Remembrance.

A well-timed earthquake then knocked them off the front page.

The vile and the brave

While the nurses, with an equally timely press release, pointed out that their largely female, overworked and underpaid workforce was still turning up, vaccinated and vaccinating.

Two vaccination clinics in the city were closed after demonstrators spat on and abused staff for doing their jobs.

Like the mob that stormed the US Capitol in January, this group’s efforts were counterproductive, as most reasonable people no matter their politics dismissed their cause, whatever it was.

Even those who sought to understand put the whole sorry episode down to conspiracy theories and misinformation.

But to dismiss them hastily is unwise.

In time, these protesters will retreat, having failed to capture hearts and minds.

But just because you can’t see them doesn’t mean they’ve gone away. It’s the dark corners that they go to when they’re not on the streets that represent the real danger zone.

Zoe Daniel: Protesters failed to capture hearts and minds, but to dismiss them hastily is unwise