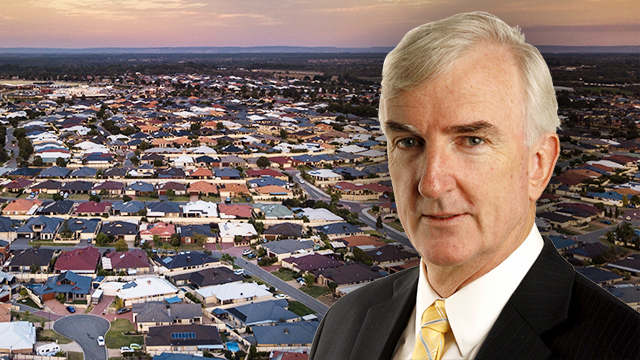 Michael Pascoe says there are many things the federal government could do if it was remotely concerned about housing affordability. Photo: TND

But that still leaves room to drop a boulder on the site lest Mr Wilson’s band of conflicted followers try sprinkling water on the dirt and claim any resulting weeds as proof of life.

You can sometimes judge an idea by the calibre of those who support it.

The Nine Entertainment newspapers helpfully provided a list in February: “Several MPs, including Liberal MPs Craig Kelly, Gerard Rennick and Jason Falinski and Nationals George Christensen and Matt Canavan, spoke in favour of the suggestion on Tuesday in a Coalition party room meeting. They argued helping Australians buy a home was the best thing for their retirement.”

If only Andrew Laming and Andrew Bragg had joined it, Mr Wilson would have had pretty much the full set.

By sticking to the economics of the thing, the Grattan article omitted two key political policy aspects of Mr Wilson’s latest campaign: He and his peers aren’t really interested in housing affordability at all, only appearing to be doing something; and they are interested in weakening superannuation however they can.

The former is what is particularly galling about this Wilson campaign.

There are a bunch of things the federal government could do if it was remotely concerned about housing affordability but, as a matter of core policy, it will not.

Rather, it is government policy to encourage and facilitate ever-higher housing prices, to keep Australian housing running well ahead of both inflation and wages growth.

That’s the simple maths of politics. As colleague Alan Kohler noted last month, there are more people with a home or two or more than without, so they are the ones the government wants to keep happy even at the expense of our overall economic health.

Ethics-free politics – feed the base and ignore the rest.

And as for the real housing crisis – the future facing people who will never be able to own their home with or without raiding their superannuation – the Coalition really doesn’t want to know.

Indeed, it is preferred government policy to drive demand into the private rental market with rental subsidies, helping to inflate investors’ assets, rather than get serious about providing stable social housing in this country.

The private rental market in our major cities for those on low wages or government assistance tends to be both the bottom of the housing barrel and perilous. The lack of stability makes it much harder to “get a go” no matter how hard people “have a go”.

Throw disrupted children’s schooling into the mix and the federal government’s preference for the private sector ends up costing society overall.

But continuing to favour private rental over government housing helps maintain a floor under the investment market.

Swearing to maintain our negative gearing industry helped Scott Morrison win the last election, so too bad about its negative consequences.

One of the more cringeworthy episodes of Malcolm Turnbull’s 2016 election campaign was his “I pledge allegiance to negative gearing and existing capital gains treatment” featuring a young couple that was intending to buy an investment property for their one-year-old.

Now, with ultra-cheap money turbo-charging investors, upgraders and first-home buyers alike, the housing market is off to the races, leaving the bottom third of the population even further behind, the biggest single driver of increasing wealth inequality.

Given the lack of federal government economic ambition beyond cutting taxes as part of its “trickle down” cargo cult, it was already Reserve Bank policy before the pandemic to encourage more expensive housing.

The RBA’s wanhope of lifting consumption had come down to trying to generate a “wealth effect” by boosting the cost of shelter through interest rate cuts to encourage people to borrow more and bid higher.

The RBA governor is reduced to defending it as part of monetary policy’s “transition mechanism”.

Then there’s the Coalition’s ongoing war on super.

Having failed to undermine profit-to-members funds on their merits and been embarrassed by the underperformance of its pet profit-to-shareholders funds, Coalition sniping ranges from encouraging unnecessary super withdrawals as COVID hit to prevarication over the legislated super guarantee increase, from the egregious choice of performance before fees (rather than the obvious “after fees”) in ranking funds to wanting to close down The New Daily.

The Home First, Super Second thought bubble is just one more shot in that fight.

P.S. It’s worth noting the independent Grattan Institute isn’t a fan of increasing the super guarantee either – that’s a debatable issue on its merits, not on political ideology.

Also, while applauding Grattan’s Monday article, I’m increasingly doubtful about how much can be achieved for rational housing policy by simply freeing up development planning and zoning.

Economist Cameron Murray has thrown enough shade on the real-world behaviour of developers to undermine a simple supply-and-demand equation.

Michael Pascoe: The federal government doesn’t care at all about the housing crisis