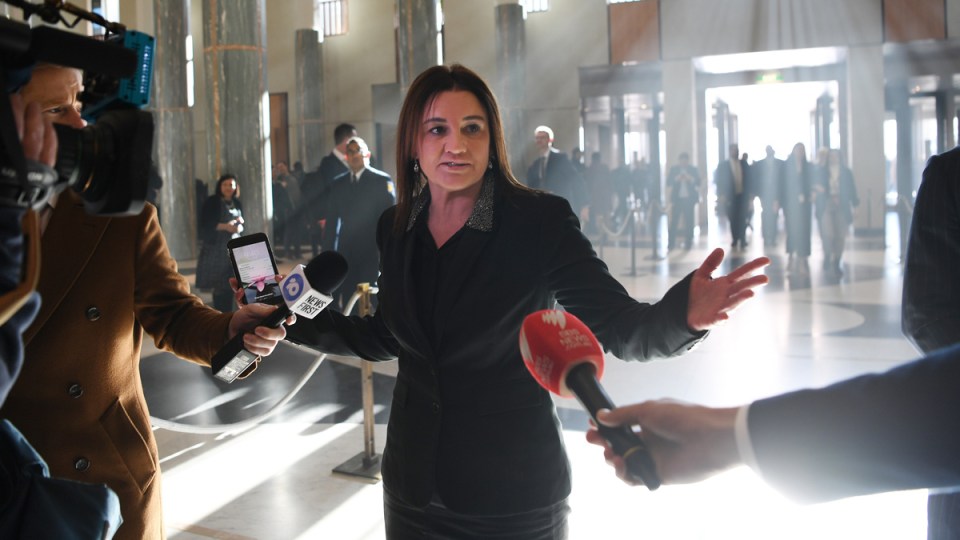 Sexism may be present in Parliament, but it takes a back seat to elitism, Jacqui Lambie writes. Photo: AAP
opinion

People ask me what I think about the culture in Parliament, and I’ve got to be honest, I haven’t seen sexism up close and first hand.

I’ve experienced arrogance, entitlement and elitism more than sexism, but it’s easy to mistake them for each other.

It’s a cheapie, something from Kmart, I’d just brought in to make the office feel a little more comfy. He kicks at it, says, “What’s this?”, and starts laughing.

There aren’t heaps of people in this building that shop where I shop, clearly. Whatever, each to their own, Kmart isn’t for everyone. It’s more that they shop where they shop because they’re just different to me.

One of the details about the Christian Porter rape allegations I almost missed was that, back when he was at the debating event in Sydney where he met his accuser, also present were two other men that would go on to serve as ministers in Scott Morrison’s government, alongside the Attorney-General.

What are the odds of that?

When the politicians that rule us are all coming from the same gene pool, generation after generation, you end up with a pretty weird gene pool.

Look at the Royal Family, God bless them.

But what I’m punting on is that there’s more people out in the real world that shop like me, speak like me, look like me, than there are who are like the rest of these politicians in Canberra.

People who talk in jargon, who treat policy like sport, who all went to prestigious universities after attending prestigious private schools, who have three pairs of black RM Williams boots.

I always laugh when ministers feel like they’ve got to start a briefing on legislation by explaining basic concepts like what the internet is.

It’s not that rare.

There are plenty of ministers who think I’m an idiot. Even those who’ve never met me. But it is worth asking what gave them the impression that I’ve got to be talked down to.

It doesn’t bother me though. I always figure, if they think they’ve got to talk to me like I’m a child, it just means they’re underestimating me.

I know what I’m capable of doing. If they don’t, they’ll figure it out.

Allegations such as those of Brittany Higgins are scary. It’s scary to think there are people in this building so clueless that they’d treat a rape allegation like an HR issue to be dealt with in-house, on the quiet.

It’s scary to think there’s people in this building who think like that, who get the biggest offices.

The people in this building I’m closest with are women.

I don’t think it’s because they’re women that I get along with them so well. I’ve got plenty of mates in the real world who are blokes, and I love them dearly.

I just think that, when it comes to women in this building, we’ve got something in common that makes it easier to have a chat and not feel like everything you’re saying is on the record.

I’ve never really thought about why that is.

I don’t think it’s because of sexism that the women in this building are the ones that are the easiest to deal with. I think there’s more than a few that look down their noses at you, sometimes because, but not always because, you’re a woman.

They just look down at you because they reckon they’re worth more
than you are.

And when you think you’re the most important person in the world, the most gifted and most fantastic person the Parliament has ever known, I reckon it’s possible to see how you’d find a way to take the mistreatment of a young staff member in your office and make it completely about you.

I don’t say this to make excuses for bad behaviour.

None of us in this building are perfect. Me included.

The difference, I reckon, is that some of us at least know that.

Jacqui Lambie: Have I experienced sexism in Parliament? No. Elitism? You bet