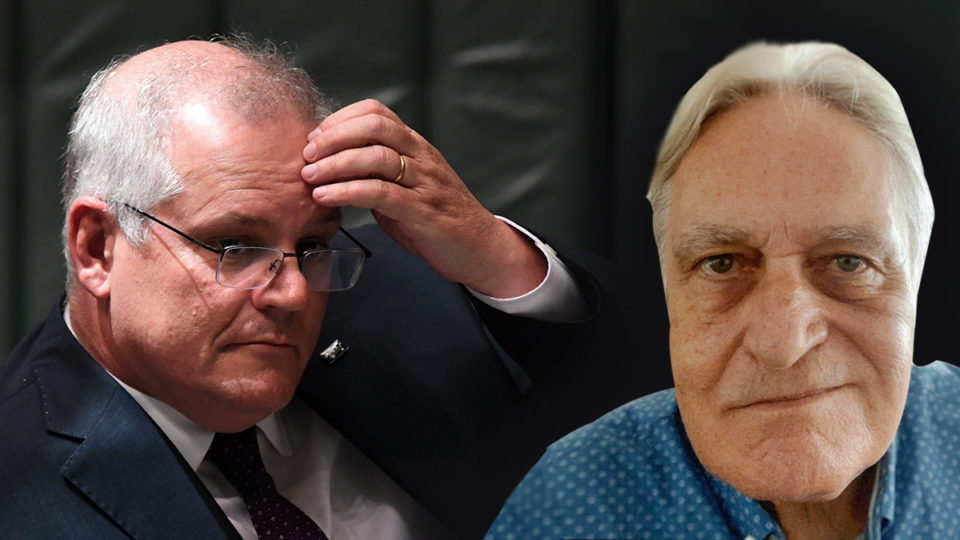 Scott Morrison says he’s got his own “flow brain” and he uses it.
opinion

Smug Scott was nowhere to be seen for most of this week. This was a change as Smug Scott has become a fixture of the political landscape, as much as its owner, Prime Minister Morrison, might want a different face for the nation.

There are always hints of Smug Scott, that self satisfaction from someone who publicly believes he has a “flow brain” which is explained as a high achiever being “in the zone” after completing a challenging task.

It’s not just for people who aim high. They reckon kids who overdose on video games experience intense “flow brain”.

Scott Morrison says he’s got his own “flow brain” and he uses it. It helped him get us mere mortals through the challenges of the Plague Year apparently.

You see it when he thinks he’s lauding it over his opponent in parliament, Labor’s Anthony Albanese. You also see when he closes his eyes and raises his open palm in one of those strategically let loose videos of one of his prosperity gospel churches on a busy Sunday.

This week it was parked in the “who can I blame for this?” room in the prime ministerial suite on Parliament’s south-western side.

Morrison had to deal with a horror week as a two-year-old rape in a ministerial office came into public view. It hit him badly, not least because he started off handling it like it was some “over there” issue instead of a human crime with uncomfortable political consequences (or not).

Morrison reached for his favoured shield when in trouble in that rubric known in political circles as “women’s stuff” – he said he’d consulted his chief humanity adviser, Spouse Jenny, and she said he needed to act like a father of girls. As they say in the writers’ cottages in Hollywood, Jeez Louise.

As the country saw in slow motion, car crash reality, it didn’t get any better. You could tell how bad it was becoming for not-so-smug Scott by the number of reviews he had set up to inquire into the mess that was on his desk every morning. By Friday it was at least three – one looking at internal Liberal matters, a public service one and a broader independent look at Parliament House culture and all that might involve. There’s sure to be a closely focussed look at just what happened inside Morrison’s office (this might be done and dusted by now).

Two things stand out. Morrison’s claim that his office didn’t know is beyond laughable. That no one in Morrison’s office told the Prime Minister about such a horrific crime in a minister’s office is more than nonsense – it‘s the least believable thing to happen in Australian politics since Harold Holt was picked up by a Chinese submarine off Portsea.

This week’s events have been the logical but awful consequence of this culture.

At the end of the day you can’t do anything about this rotten culture because it needs itself to perpetuate. It’s the reason very few good people go into politics, and most of those who do get caught in it’s sway. You all end up eating Chinese food with Graham Richardson or going to a Raheen fundraiser in a stretch limo.

Morrison thrives and prospers in this culture. Evidence is everywhere from the way he won preselection for the southern Sydney seat of Cook to the way he has parlayed spinning the pandemic into the most sophisticated background briefing exercise of senior journalists anyone can recall.

Before this week’s inconvenient snap back to reality, there were early signs the public was noticing Smug Scott. He was showing up in focus groups as respondents used the phrase when asked to describe the prime minister.

“He’s looking a bit smug, a bit too comfortable in his own success,” said one participant. Anyone wanting to see the back of Morrison shouldn’t take too much from these words in a research report.

They used to throw negative epithets when talking about John Howard 15 years ago and a report from England this week said the favourite word voters used to describe Boris Johnson was “twat” but they were still going to vote for him.

Just as the week from Hades might have dented Morrison’s approval numbers in the new Newspoll, the international swagger of big technology might have saved his ratings. That zero sum game is full of hairpin bends.

With the landscape becoming a little less threatening, Smug Scott reappeared Friday morning, opportunistically boasting of his conquest over Amazon and how he can stand up to the tech-iest tech lords. It was a reminder he’s going to stay smug for a while longer.