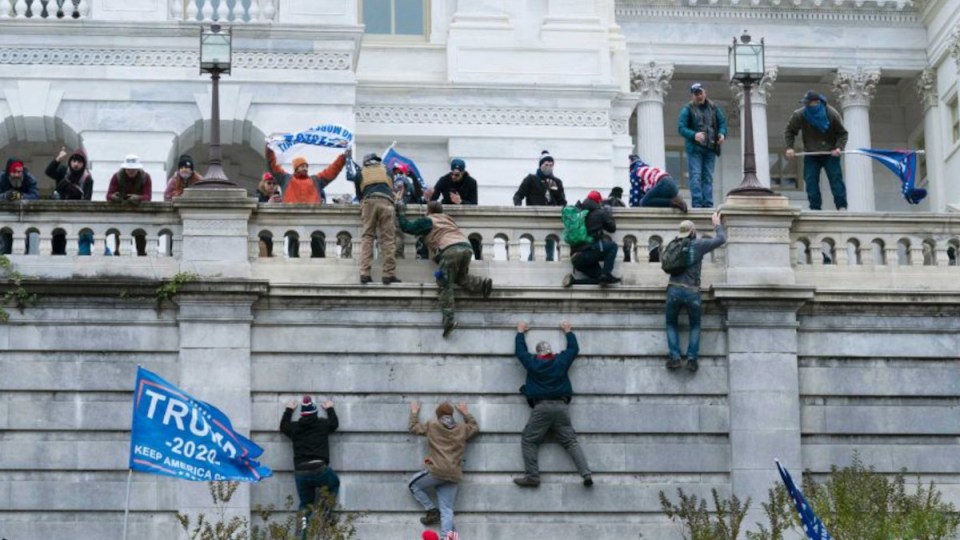 A former Facebook manager says the company contributed to the chaos of the US Capitol riot. Photo: Getty

It was a money-making move that a company whistleblower alleges contributed to the deadly January 6 invasion of the US Capitol, she added.

The whistleblower – former Facebook product manager Frances Haugen – also asserted during an interview that aired on Sunday on the US version of 60 Minutes that a 2018 change to the content flow in Facebook’s news feeds contributed to more divisiveness and ill will in a network ostensibly created to bring people closer together.

Despite the enmity that the algorithms were feeding, Facebook found that they helped keep people coming back – a pattern that helped the Menlo Park, California, company sell more of the digital ads that generate most of its advertising.

“The thing I saw at Facebook over and over again was there were conflicts of interest between what was good for the public and what was good for Facebook,” said Ms Haugen, who joined Facebook in 2019 after working at other Silicon Valley companies such as Google and Pinterest.

Facebook’s annual revenue has more than doubled from $US56 billion ($A77 billion) in 2018 to a projected $US119 billion ($A164 billion) this year, based on the estimates of analysts surveyed by FactSet. Meanwhile, the company’s market value has soared from $US375 billion ($A516 billion) at the end of 2018 to nearly $US1 trillion ($A1.4 trillion) now.

The 60 Minutes interview intensifies the spotlight already glaring on Facebook as politicians and regulators around the world scrutinise the social networking’s immense power to shape opinions and its polarising effects on society.

The backlash has been intensifying since The Wall Street Journal‘s mid-September publication of an expose that revealed Facebook’s own internal research had concluded the social network’s attention-seeking algorithms had helped foster political dissent and contributed to mental health and emotional problems among teens, especially girls.

After copying thousands of pages of Facebook’s internal research, Ms Haugen leaked them to the Journal to provide the foundation for a succession of stories packaged as as the “Facebook Files.”

Although Facebook asserted the Journal had cherry picked the most damaging information in the internal documents to cast the company in the worst possible light, the revelations prompted an indefinite delay in the rollout of a kids’ version of its popular photo- and video-sharing app, Instagram. Facebook requires people to be at least 13 years old to open an Instagram account.

Facebook’s global affairs boss Nick Clegg has already tried to contain the fallout in 1500-word memo warning Facebook employees that the whistleblower interview might subject them to more hard questions from family and friends about the social network’s corrosive side effects.

Ms Haugen, 37, has filed at least eight complaints with US securities regulators alleging Facebook has violated the law by withholding information about the risks posed by its social network, according to 60 Minutes.

Facebook in turn could take legal action against her if it asserts she stole confidential information from the company.

“No one at Facebook is malevolent,” Ms Haugen said during the interview.

“But the incentives are misaligned, right? Like, Facebook makes more money when you consume more content. People enjoy engaging with things that elicit an emotional reaction. And the more anger that they get exposed to, the more they interact and the more they consume. ”

Speak to the dead: Amazon Alexa to use the voice of your lost loved ones
Police face charges over Trump mob’s Capitol Hill attack
Today's Stories