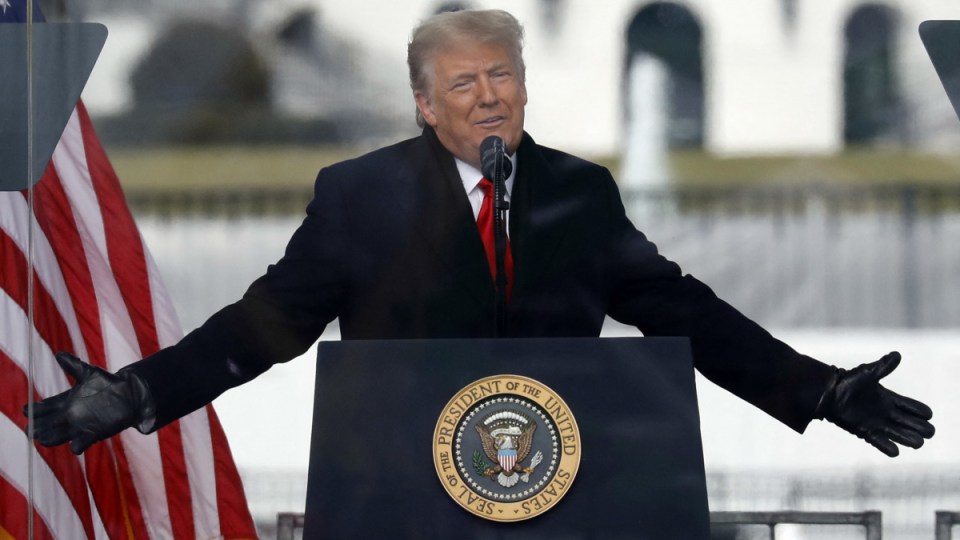 US President Donald Trump addresses fans at the ‘Save America’ rally just before the mob descended on the US Capitol. Photo: AAP

The legislative power of United States President-elect Joe Biden’s administration hangs in the balance with run-off elections in Georgia still too close to call.

Two Republican senators are trying to fend off Democratic rivals in the crucial election, with late results buoying progressives’ hopes they will triumph in both contests.

Democrat Raphael Warnock claimed victory in his race against Republican Kelly Loeffler on Wednesday, despite major US networks saying it was still too close to call.

The Georgia run-offs come as President Donald Trump puts pressure on Vice President Mike Pence to object to the result of November’s election when it is formalised in Congress on Thursday.

By Thursday morning (Australian time), a rogue group of Republicans had lodged the first of several extraordinary and futile challenges to the election outcome.

Outside the White House, Mr Trump spoke to supporters and repeatedly called on Mr Pence to “have the courage to do what he has to do”.

But the Vice President rejected the pressure.

I do not believe that the Founders of our country intended to invest the vice president with unilateral authority to decide which electoral votes should be counted during the Joint Session of Congress, and no vice president in American history has ever asserted such authority.’’
– Vice President Mike Pence

Mr Trump also claimed, without evidence that: “This year they rigged the election, they rigged it like they never did before.”

He then encouraged the group of die-hard fans he was speaking to to head the Capitol to show their discontent.

Photo from inside the House chamber by @AP pic.twitter.com/rRlcRbBwYl

Since then, hundreds of people have stormed the building where senators were meeting for the debate over the election results.

Protesters tore down metal barricades at the bottom of the Capitol’s steps, the violence becoming so alarming that parts of the building were locked down.

‘Make our break’ for Biden

Meanwhile, counting was continuing in Georgia.

Political science PhD candidate at the University of Sydney Luke Mansillo said both sides were desperately hoping for a win in Georgia – as the results will determine who controls the upper chamber in the nation’s Congress.

“It is make or break for the Democrats,” Mr Mansillo told The New Daily.

“If the Democrats take those seats, there is a tie in the Senate. A tie is broken by the Vice President, who in this case will be Kamala Harris.

Just evacuated my office in Cannon due to a nearby threat. Now we’re seeing protesters assaulting Capitol Police.

This is wrong. This is not who we are. I’m heartbroken for our nation today. pic.twitter.com/jC9P0YfSLQ

“She will cast any decided vote in a tie, which will mean Mr Biden can pass legislation.”

If Republicans win just one seat, they will have the ability to block every piece of legislation the Biden administration tries to pass, Mr Mansillo explained.

“The Republicans will obstruct, as they did throughout Obama’s term. They will hold the government to ransom,” he said,

If the Democrats miss out they will have to wait until 2022 for another go at the Senate, and it is unlikely voters will side with the incumbent President, Mr Mansillo said.

“Given historical precedent, [Biden] has this one shot at it, otherwise he has a poisoned chalice,” he said.

Voters in Georgia cast their votes at a tumultuous time in the nation’s history, as President Trump continues to deny he lost the election and cases of COVID-19 skyrocket around the nation.

“Biden will inherit a country which is in a recession, afflicted by a pandemic with the greatest degree of partisanship seen in living memory, an obtrusive Senate and an obstructive Supreme Court,” he said.

“Meaning there will be little avenue for executive actions and decrees.”

Late votes showed the Democrats are within reach of taking the two seats.

With 97 per cent of the vote counted just before midnight in the US, Reverend Warnock was leading Senator Loeffler by 35,000 votes when he claimed victory.

Documentary filmmaker Jon Ossoff was tied with David Perdue on 50 per cent.

It could be days before we know the result as absentee and military ballots can still be counted in the coming days, US political analyst and ANU Professor Wesley Widmaier said.

Georgia used to be part of the Republican “solid south”, but it has increasingly been turning from red to “purple” as more voters back the Democrats, Professor Widmaier said.

“It is more and more nuanced. You’ve got your Georgia, North Carolina, Alabama and they are all about 30 to 40 per cent African-American,” he said.

“They’re still 60 per cent white and they’re socially conservative, but then you’ve got the issue of these new urban hubs, like Atlanta.

“Atlanta is a fashionable city among progressive young people.”

If 33-year-old Mr Ossoff wins he will be the youngest senator elected since Mr Biden won a Senate seat, then 29 years old in 1972.

Reverend Warnock would become the state’s first African-American senator and the Senate’s third.

They have both drawn voters from different elements of the Democratic party, Professor Widmaier said.

“They both have appeal to different demographics,” he said.

“Ossoff speaks to the urban progressives and Warnock is an African-American community organiser from a famed church.”

Senator Loeffler could also make history in Georgia. She was appointed to her seat last year after a vacancy. If she somehow manages to keep it, she will be the first elected female senator in the state’s history.

Both Senators Perdue and Loeffler need to bring out those conservative voters that have traditionally kept Georgia red.

Interestingly, neither of the candidates have conceded that Mr Trump lost the election, meaning they have not been able to argue the election is important for determining control of the Senate.

The tight race comes as The New York Times reported on Wednesday that Vice President Mike Pence told President Donald Trump he does not have the power to block Congress ratifying Mr Biden’s victory.

On Wednesday the President appeared to put pressure on his VP to reject the confirmation, tweeting: “The Vice President has the power to reject fraudulently chosen electors.”

At their weekly lunch, he continued to turn up the heat on his VP, warning him it would be politically “damaging” for him to not block the certification.

In a statement, the President denied the reports claiming: “The New York Times report regarding comments Vice President Pence supposedly made to me today is fake news. He never said that.