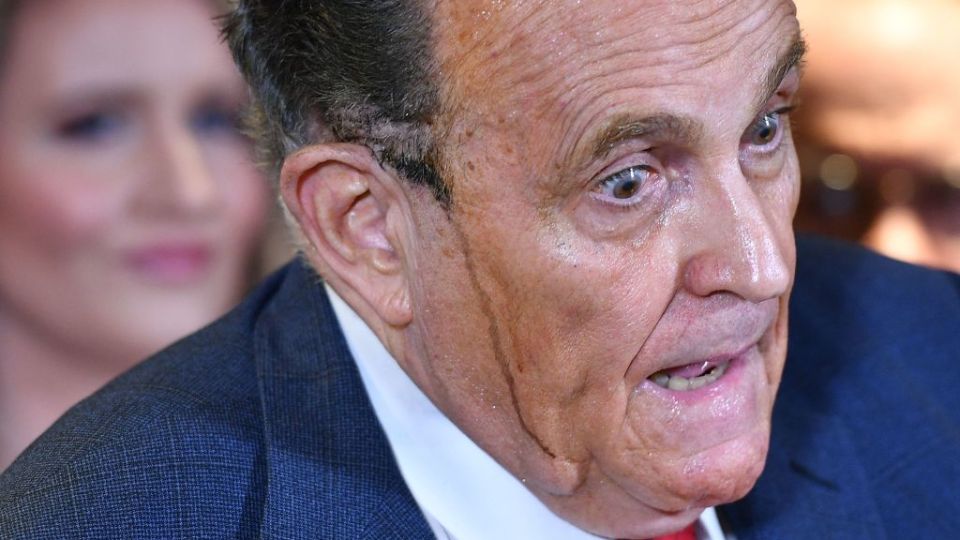 US President-elect Joe Biden has scoffed at the claims made by Donald Trump’s lawyer, Rudy Giuliani, in a bizarre – and sweaty media conference.,

Mr Giuliani, who appeared to struggle with the head in the small, crowded room, made far-fetched claims of a “communist” plot to rig voting and berated journalists in an astonishing rant.

“What I’m describing to you is a massive fraud,” he said, as he sweated so profusely that what appeared to be hair dye dripped down both his cheeks.

“It isn’t a little teeny one.”

Mr Giuliani’s appearance on Thursday (US time) came as he and Mr Trump make increasingly desperate allegations of election fraud and the outgoing president continues to maintain his legal team has “a very clear and viable path to victory” in the November election.

Among one of Mr Giuliani’s targets was the hand recount in Georgia, which he said would be illegitimate because officials were simply recounting fraudulent ballots. Just hours later, the official recount was finalised, leaving Mr Biden in front on a vote barely changed from the original count.

A bemused Mr Biden was scornful of the Trump campaign’s latest wild claims.

“He (Mr Trump) will go down as being one of the most irresponsible presidents in American history,” he said.

“Yet another Rudy Giuliani spectacle exposes, as his appearances always do, the absurdity of Donald Trump’s thoroughly discredited claims of voter fraud,” he said within hours of the bizarre announcement.

“Numerous courts, election officials from both parties, and even officials within Trump’s own administration, have all reaffirmed that claims of widespread voter fraud are categorically false.”

On Thursday, Mr Giuliani also claimed it was impossible for Mr Biden to have won key battleground states such as Michigan and Pennsylvania when he was initially trailing on election night.

But Mr Gwin said Trump campaign lawyers had admitted in their various court actions against the election result that there was no widespread fraught or errant voting.

“No matter how hard Trump and the flailing Giuliani try, they cannot overturn the will of the American people, who resoundingly picked Joe Biden to be the next President of the United States,” he said.

Mr Giuliani’s performance also drew criticism from Chris Krebs, who was fire by Mr Trump this week as head of the US Department of Homeland Security’s Cybersecurity and Infrastructure Security Agency.

Mr Krebs, who learned he had lost his job when he read a tweet from Mr Trump, responded through the same medium on Thursday.

“That press conference was the most dangerous 1hr 45 minutes of television in American history,” he said.

“And possibly the craziest. If you don’t know what I’m talking about, you’re lucky.”

At the briefing, Mr Giuliani also performed an impersonation from what he said was his favourite law movie, My Cousin Vinny, to underscore his unfounded arguments about widespread cheating.

It was the latest bizarre outing from the former New York City mayor, who was once praised as a widely respected top federal prosecutor and for his handling of the devastating September 11 terror attacks on his city.

In October, he was forced to defend himself after being caught in a compromising position in a hotel room with a young woman actor who turned out to be part of a stunt for the Borat movie sequel.

Mr Giuliani, who was shown in the film lying on a hotel room bed with his hand down his pants after flirting with the actor, called the scene a “total fabrication”.

He claimed he had been tucking in his shirt after taking off electronic equipment.

“At no time before, during, or after the interview was I ever inappropriate,” he tweeted.

“If Sacha Baron Cohen implies otherwise he is a stone-cold liar.”

Those legal motions, sprinkled with factual errors, have been dismissed by Mr Biden’s campaign as “theatrics” that are not based on sound law.

Several prominent law firms have pulled out of the operation, leaving Mr Giuliani to spearhead the efforts.