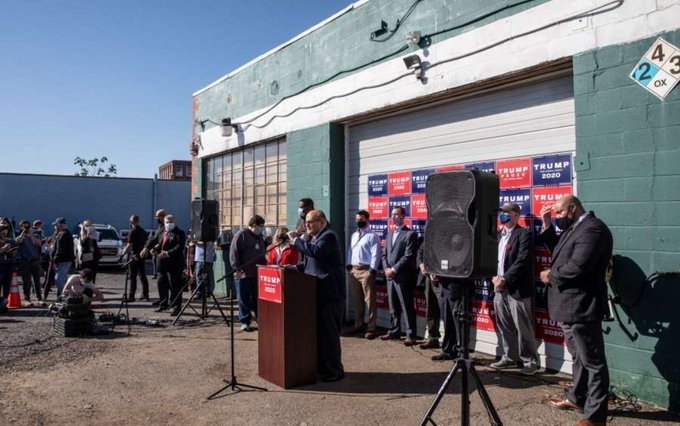 The US presidential election was a gruelling few days with twists and turns aplenty, but surely nobody expected it to end with a media conference in a car park.

There were moments of the election that could have been foreseen.

The lawsuits were a bit of a surprise, but Mr Trump’s personal lawyer Rudy Giuliani speaking to crowds of international media in the car park of a landscaping business … next door to an adult bookshop called Fantasy Island and across the road from a crematorium … who could have seen that coming?

It is unclear whether the Trump campaign intentionally booked the Four Seasons Total Landscaping company for a press conference, or had mistaken it for the Four Seasons Hotel in Philadelphia.

The location triggered enough confusion that the hotel responded by tweeting a clarification – the presidential briefing was not planned for any of its venues.

As Mr Giuliani stepped up to a spot of concrete in front of a garage door, Joe Biden was called as the President-elect.

Apparently, Mr Giuliani was unaware of this as he began speaking.

“I’m here to describe to you the first part of a situation that is very troubling,” he said.

He then went on to claim that dead people had been voting in Philadelphia. He provided no evidence to support his claims, but he might have had a source from the crematorium across the street.

He did not specify whether the dead voters were supporters of Mr Biden.

Asked how Mr Trump’s legal team would attempt to overturn Mr Biden being named as the next US president, Mr Giuliani asked who had made the call. Came the reply: All of the major networks.

By Monday afternoon (Australian time), Mr Trump still had not conceded defeat, and has offered no explanation for the odd location of his lawyer’s press conference.

Whatever the reason for the venue, Twitter was not kind.

Four Seasons Total Landscaping has made a statement via its Facebook page to defend the business from “harsh judgment”.

There was also the opportunity to spruik a range of T-shirts.

Alas, it seems a Twitter user has beaten them to that idea.

Apparently, it hasn’t been good news for Fantasy Island book shop either.

Where were the press when the US election was called? Not at the Four Seasons Hotel Philadelphia