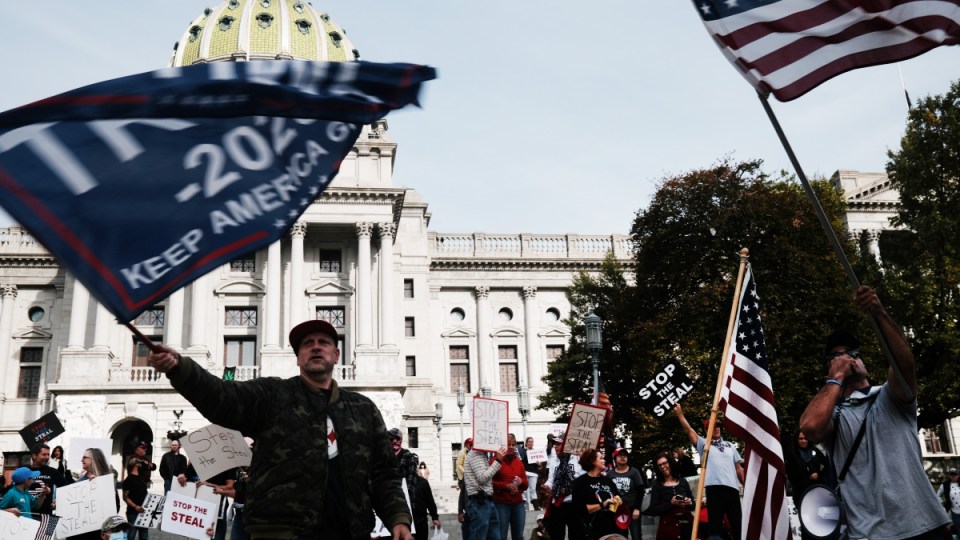 A second day of sometimes duelling demonstrations over the integrity of the US presidential election continue in Philadelphia and other cities as ballot counting dragged on in a handful of states that will decide the outcome.

Supporters of Joe Biden have rallied around the slogan to “Count every vote,” believing a complete tally would show the Democratic former vice president had beaten Republican President Donald Trump.

Some ardent Trump backers have countered with cries to “Protect the vote” in support of his campaign’s efforts to have some categories of ballots, including some votes submitted by mail, discarded.

Both factions appeared outside a vote-counting centre in Philadelphia on Thursday morning, where election staff steadily worked through a mountain of still-uncounted mail-in ballots that will determine whether Biden or Trump will take Pennsylvania’s crucial 20 Electoral College votes.

A group of Trump supporters held Trump-Pence flags and signs saying: “Vote stops on Election Day” and “Sorry, polls are closed.” Across the street were Biden supporters, who danced to music behind a barricade.

In Harrisburg, about a hundred Trump supporters gathered on the steps of the Pennsylvania State Capitol Building on Thursday afternoon as part of a “Stop the Steal” rally.

Some carried Trump signs, others American flags, and a few wore T-shirts emblazoned with a logo denoting the conspiracy theory known as QAnon.

Earlier on Thursday, a state appellate court ruled that Republican observers could enter the Philadelphia building where poll workers were counting ballots.

Although counting was already completed in Michigan, which news outlets projected Biden had won, a few dozen Trump supporters waved flags and signs outside a Detroit counting centre.

In Washington, a procession of cars and bicycles, sponsored by activists from a group called Shutdown DC, paraded slowly through the streets of the capital to protest “an attack on the democratic process” by Trump and his “enablers,” according to its website.

Most demonstrations in cities around the country have been peaceful and small — sometimes amounting only to a few dozen people with signs standing in a city centre — as Biden’s path to victory looks a bit more assured than Trump’s, even though either outcome remains possible.

On Wednesday, a few demonstrations led to clashes with police. The demonstrations were triggered in part by Trump’s comments following Tuesday’s Election Day in which he demanded that vote counting stop and made unsubstantiated, conspiratorial claims about voter fraud.

Police in New York City, Denver, Minneapolis and Portland, Oregon, all reported they had arrested some protesters, often on charges of blocking traffic or similar misdemeanours.