Americans have taken to the streets of cities across the United States as uncertainty around the result of the country’s cliffhanger election fuels tensions.

Democratic candidate Joe Biden appeared to be in the lead as counting continued in battleground states, expressing confidence he would be the next US president.

President Donald Trump, meanwhile, has claimed to have won many of the seats predicted to fall to Mr Biden, and has questioned the legitimacy of election results.

Protests flared around the country as ballot counting in the final battleground states continued, with some demonstrators demanding that every vote be counted, while others insisted that the counting be shut down.

Mr Trump’s campaign has filed lawsuits challenging the vote counts in Pennsylvania, Michigan and Georgia, laying the groundwork for contesting key states as he slipped behind Mr Biden.

The new filings, joining existing Republican legal challenges in Pennsylvania and Nevada, demand better access for campaign observers where ballots are being counted.

The Trump campaign has also requested a recount in Wisconsin, which appeared to have been closely won by Mr Biden.

Mr Biden appears to be just six seats short of the 270 needed for him to declare victory in the race for the White House.

While Mr Trump’s claims of voting irregularity appear to be without merit, the President has launched into a campaign on Twitter, calling into question the legitimacy of mail-in ballots that have seen him fall behind in states where he previously held sizeable leads.

Mr Trump used incendiary language while alerting his base to what he asserts is an attempt on the part of the Democrats to “steal the election”. 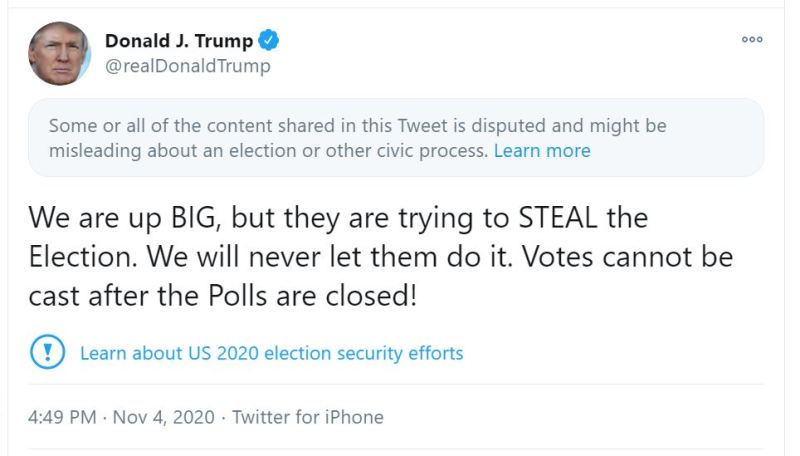 Mr Trump has previously tweeted that the Supreme Court’s decision to allow mail-in ballots could lead to violence in the streets. 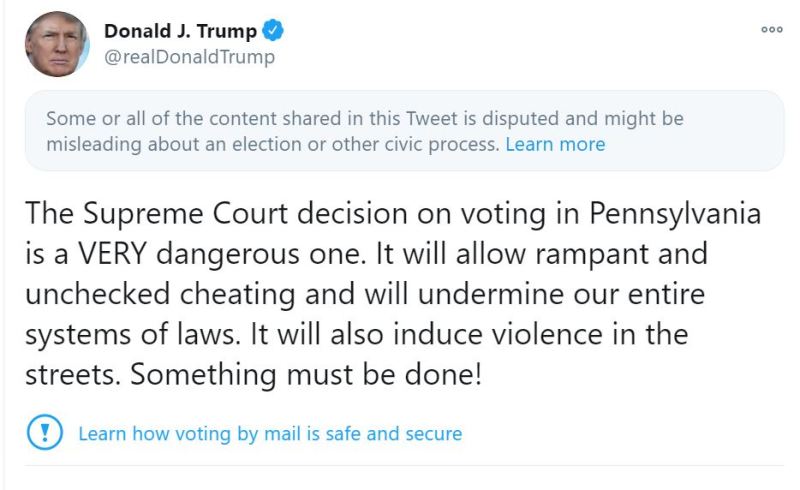 Twitter prevented the tweets from being shared across its platform.

A riot was declared in Portland, Oregon after a “Count Every Vote” demonstration merged with another focused on racial justice and police brutality.

Some people broke away from the group and smashed storefront windows in the downtown area, the New York Times reported.

In Minneapolis, hundreds of protesters blocked a local highway before police moved in to make arrests, with demonstrators taking to social media to say that the officers had trapped them to prevent them from dispersing.

A look at the growing crowd of hundreds of protesters and Trump supporters outside the Maricopa County Elections Center.

Sheriff’s deputies moved us media back inside for safety concerns. #azfamily #arizona pic.twitter.com/tFYb1cscdw

Some businesses in major cities boarded up their premises fearing a return of the mass protests and looting arising from Black Lives Matter protests earlier in the year.

The flip from Republican red back to Democratic blue was a huge blow to Mr Trump, whose victories in Michigan, Wisconsin and Pennsylvania in 2016 sent him to the White House.

While Michigan and Wisconsin have been declared for Mr Biden,  counting in Pennsylvania is yet to be finalised.

At an address earlier Thursday, Mr Biden said he was not ready to declare victory as vote counting continues, but said that when the count is finished “we believe we will be the winners”.

“Every vote must be counted,” Mr Biden told reporters in Wilmington, Delaware, alongside his running mate Senator Kamala Harris.

“We the people will not be silenced,” he said.

“After a long night of counting, it’s clear that we’re winning enough states to reach 270 electoral votes needed to win the presidency.”

Mr Biden promised to reach out to political opponents and insisted that the presidency “itself is not a partisan institution”.

He stressed the need for Americans to “come together” and “heal” once a result had been finalised.

“We have had hard campaigns before. We have faced hard times before. So, once this election is finalised and behind us, it will be time for us to do what we’ve always done as Americans,” Mr Biden said in his prepared speech.

“To unite. To heal. To come together as a nation.”

Alluding to Mr Trump’s late-night address on election day, in which he falsely claimed he had won the election, Mr Biden said the result of the presidential election would be decided by voters.

Anthony Albanese said the world needed to “speak up for democracy”, as Australian political leaders tiptoed around the sensitive troubles being faced Australia’s most important ally.

Foreign minister Marise Payne said firmly that it was important that “every vote is counted”, in direct opposition to President Trump who had called for counting to stop.

Prime Minister Scott Morrison was more cautious, saying people needed to be “patient” in the tense wait for a result.

“We respect the decisions that the American people make in their democracy,” Mr Morrison said, adding that he wouldn’t comment directly on the process.

“This is a democracy that has withstood the demands of centuries and I have no doubt it will continue to prevail and continue to be a great partner for Australia,” he added.

“I don’t share the impatience of others when it comes to a result being arrived at.”

Mr Morrison is seen as one of the few world leaders to enjoy good working terms with President Trump, and the two have publicly appeared to have a strong relationship. Mr Trump praised the
Australian PM as “the man of titanium” when Mr Morrison visited the USA for a special state dinner in his honour last year.