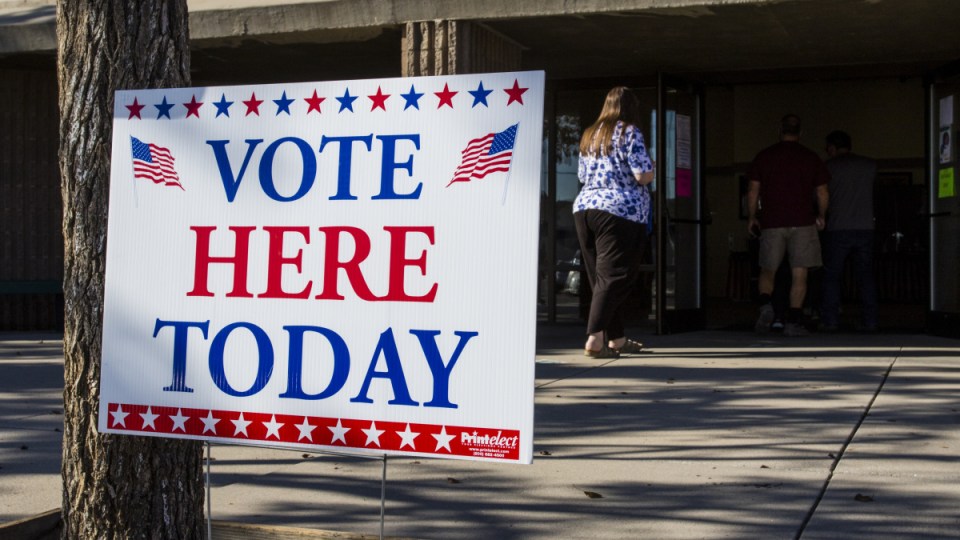 Americans have calmly turned out for voting in on US election day. Photo: Getty

President Donald Trump is narrowly leading Democratic rival Joe Biden in the vital battleground state of Florida, while other swing states that will help decide the election outcome, such as Georgia and North Carolina, remain up in the air.

The two contenders split the first US states to be projected in the White House race, with conservative states like Alabama, Indiana, Kentucky and Tennessee going to Trump and Democratic-leaning Massachusetts, Vermont and Virginia going to Biden, according to projections by television networks and Edison Research.

But in Florida, widely seen by voting experts as a must-win state for Trump in his quest for the 270 Electoral College votes needed to win the presidency, Trump was leading Biden 50.5 per cent to 48.5 per cent based on about 90 per cent of the estimated total votes.

The 78-year-old Mr McConnell defeated Democrat Amy McGrath, a retired Marine combat pilot who challenged him as a political outsider.

Ms McConnell is the longest-serving Republican leader in Senate history.

As Mr Trump’s top ally on Capitol Hill, Mr McConnell led efforts to defend the president during his impeachment acquittal in the Senate.

Twitter has suspended several recently created right-leaning news accounts posting information about voting in the US election for violating its policies.

One of those suspended, SVNewsAlerts, had 69,000 followers as of last week.

The account frequently warned of election-related unrest and highlighted issues with voting safety and reliability. It pointed to fraud claims about Democrats and called attention to Republican President Donald Trump’s rallies and speeches.

US President Donald Trump says he will declare himself the winner of the election “only when there’s victory”.

There has been concern that Mr Trump will declare victory early, before vote counts are definitive, but the Republican president told Fox News there was no reason to “play games”.

The President said he though he had a “very solid chance at winning”.

“I think we’re going to have a great night but it’s politics and it’s elections and you never know,” Trump said during a visit to thank campaign staff.

Democratic presidential nominee Joe Biden refused to be drawn on the outcome of the US election in the final hours of voting.

Speaking to reporters outside a Delaware community centre, Mr Biden said he was “superstitious” about offering predictions for election night but remained “hopeful”.

He said he had heard from aides that there was “overwhelming turnout” among young people, women and older black adults in places such as Georgia and Florida.

“The things that are happening bode well for the base that has been supporting me – but we’ll see,” he said.

Still, he admitted “it’s just so uncertain” because of how many states were in play.

Americans by the millions have waited patiently to cast ballots at libraries, schools and arenas across the country, in an orderly show of civic duty that belied the deep tensions of one of the most polarising presidential campaigns in US history.

The face masks worn by many voters and the sight of boarded-up stores in some city centres were reminders of two big issues shaping the 2020 election, with COVID-19 still ravaging parts of the country after a summer of sometimes violence-marred protests against police brutality and racism.

While civic rights groups said they were monitoring for any signs of voter interference and law enforcement agencies were on high alert for disruption at the polls, their worst fears had not materialised by early afternoon.

The American Civil Liberties Union and other civil rights groups said they were watching closely for signs of voter intimidation, and the US Justice Department’s Civil Rights Division said it would deploy staff to 18 states.

The FBI is looking into a spate of mysterious robocalls urging people to stay home on election day as the nation remains on high alert to ensure voting is not compromised, a Department of Homeland Security official says.

US state and local officials have been raising the alarm over at least two separate automated call campaigns as millions of Americans cast their votes to decide between Donald Trump and Joe Biden.

Getting reports of multiple robocalls going to Flint residents that, due to long lines, they should vote tomorrow.
Obviously this is FALSE and an effort to suppress the vote. No long lines and today is the last day to vote. Don’t believe the lies! Have your voice heard! RT PLS.

Audio of the calls features a synthetic female voice saying: “Hello. This is just a test call. Time to stay home. Stay safe and stay home.”

A judge ordered the US Postal Service to sweep mail processing facilities for delayed ballots and immediately dispatch any for delivery in about a dozen states including election battlegrounds such Pennsylvania and Florida.

USPS data presented in the case showed about 300,000 ballots that were received for mail processing did not have scans confirming their delivery to election authorities.

While ballots may be delivered without delivery scans, voting rights groups fear mail delays could cause at least some of those votes to be disqualified.

US District Judge Emmet Sullivan ordered postal officials to complete the inspections by 3pm EST (7am AEDT) on Tuesday and certify by 4.30pm EST (8.30 AEDT) that no ballots were left behind.