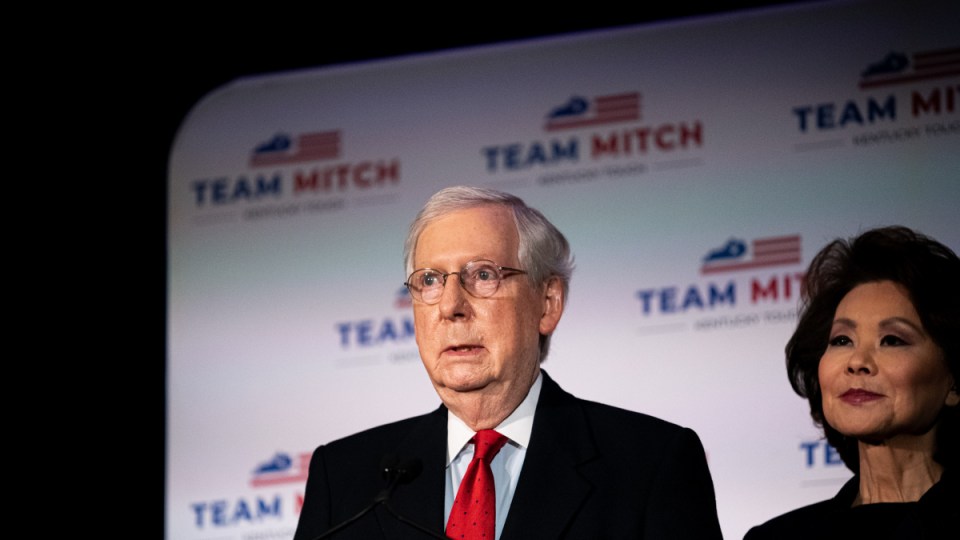 The re-election of Mitch McConnell may not be enough to win the Senate for the Republicans. Photo: Getty

A close election for US Senate seats could deliver the Democrats control of both Congressional houses for the first time in a decade.

The Democrats could emerge with as many as 55 Senate seats, giving them a majority in both the Senate and the 435-seat House of Representatives, where they are expected to maintain control.

Republican Senator John Cornyn of Texas has won re-election as the first victor among a dozen vulnerable Republican incumbents in highly competitive races that will determine control of the US Senate.

However, final results from at least five of those contests may not be available for days, and in some cases, months.

With public disapproval of President Donald Trump weighing on Republicans across the country, voters are deciding whether to end the political careers of embattled Republican senators, including Trump ally Lindsey Graham of South Carolina and moderate Susan Collins of Maine, among others.

In total, 12 Republican-held seats and two Democratic-held seats have been in play, based on a Reuters analysis of three nonpartisan US elections forecasters – the Centre for Politics at the University of Virginia, the Cook Political Report and Inside Elections.

Senator Cornyn, who entered the Senate in 2002, was declared the winner against Democratic challenger MJ Hegar in a state that appeared to drift toward Democratic presidential nominee Joe Biden in the final days of the campaign.

Republican Senator Majority Leader Mitch McConnell also won re-election on Tuesday. He was among a number of incumbents from both parties to be declared winners in less competitive races.

“There are dogfights all over the country,” Senator McConnell, the top Republican in Congress, said at a campaign stop earlier in the week. He described the possibility of Republicans holding on to the Senate majority as a “50-50 proposition”.

Those odds appear optimistic, based on the three forecasters.

Democrats are hoping to usher in a new political era in Washington if their presidential nominee, former vice-president Joe Biden, also wins.

To win the majority in the Senate, Democrats need to pick up only three Republican seats if Biden is elected president and Senator Kamala Harris wields the tie-breaking vote as vice president. Republicans now hold a 53-47 seat majority.

Republican Senator Cory Gardner of Colorado is seen as the most vulnerable among over half a dozen first-term party incumbents in Alaska, Arizona, Georgia, Iowa, Montana and North Carolina. Democrats Doug Jones and Gary Peters are also on defense in Alabama and Michigan, respectively.

Results from some races are not likely to be known until after election day, due to this year’s unprecedented volume of mail-in ballots and possible runoff elections in four races.

Close Senate race could deliver both US houses to Democrats