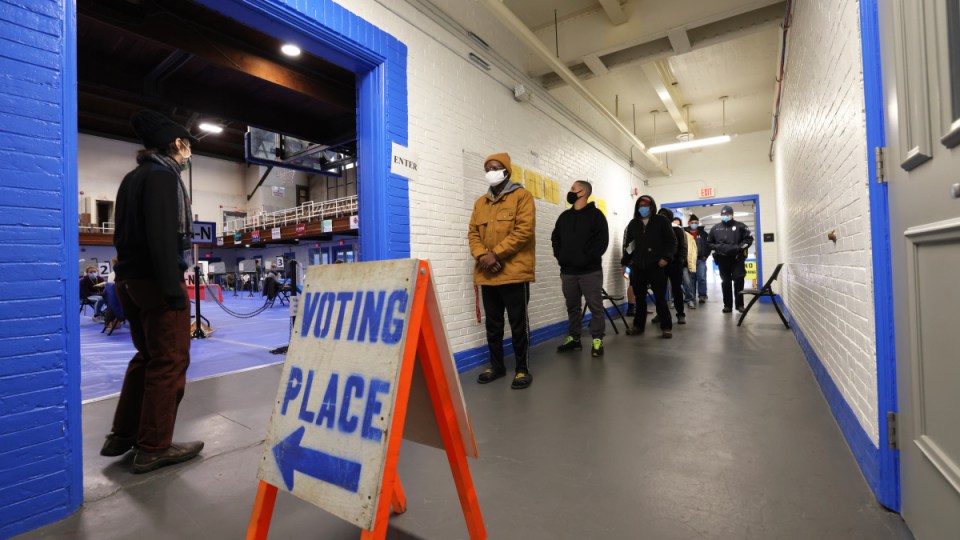 The first polls are in and its a mixed result for the candidates. Photo: Getty

Counting is also underway in 20 other states, with most polls expected to be closed by 1pm AEDT.

Each state gets a number of electoral college votes roughly in line with its population, and they largely hand them all to the winner in that state.

With 538 up for grabs across the US, 270 is the key number to win the presidency.

With more than 80 per cent of votes counted in the important state of Florida, Mr Trump was neck-and-neck with Mr Biden.

Mr Trump earlier said he would declare himself the winner of the election “only when there’s victory”.

There had been concern that Mr Trump would declare victory early, before vote counts are definitive, but the President told Fox News there was no reason to “play games”.

Mr Trump said he thought he had a “very solid chance at winning”.

“I think we’re going to have a great night but it’s politics and it’s elections and you never know,” Trump said during a visit to thank campaign staff.

Mr Biden refused to be drawn on the possible outcome of the election, but said he was “hopeful”.

Speaking to reporters outside a Delaware community centre, Mr Biden said he was “superstitious” about offering predictions for election night.

He said he had heard from aides that there was “overwhelming turnout” among young people, women and older black adults in places such as Georgia and Florida.

“The things that are happening bode well for the base that has been supporting me – but we’ll see,” he said.

Still, he admitted “it’s just so uncertain” because of how many states were in play.

Americans by the millions waited patiently to cast ballots at libraries, schools and arenas across the country, in an orderly show of civic duty that belied the deep tensions of one of the most polarising presidential campaigns in US history.

The face masks worn by many voters and the sight of boarded-up stores in some city centres were reminders of two big issues shaping the 2020 election, with COVID-19 still ravaging parts of the country after a summer of sometimes violence-marred protests against police brutality and racism.