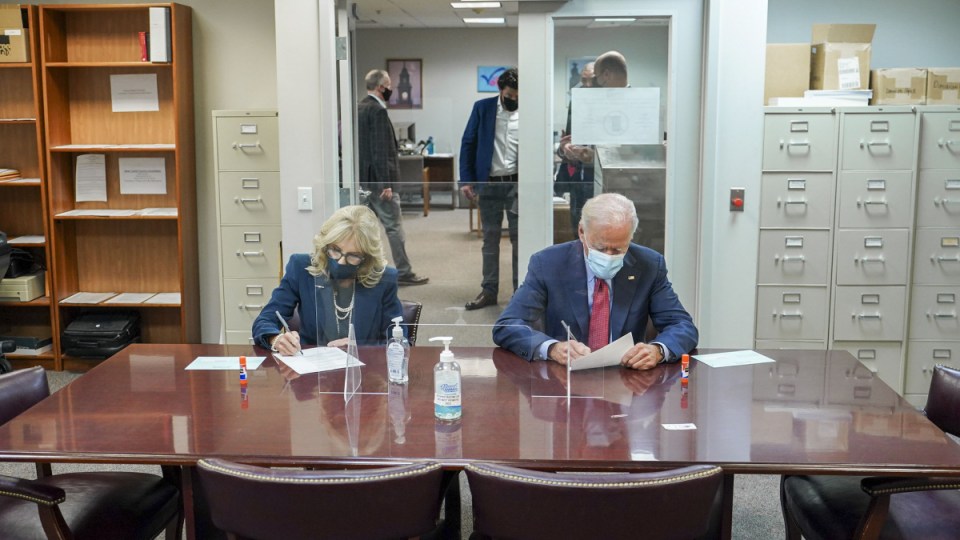 US Democratic presidential candidate Joe Biden and his wife Jill have cast early ballots in their home state of Delaware, joining 74 million others who have already voted.

“Well, we just voted,” Biden said as he and his wife emerged from the polling site holding hands on Wednesday.

Election day in the US is November 3, people have been rushing for weeks to take advantage of mail-in and early voting opportunities.

The number of people across the country who have already voted is more than half of the total number who voted in the 2016 presidential election, according to the US Elections Project, a turnout-tracking database created by a professor from the University of Florida who specialises in US elections.

The record-shattering number of people choosing to vote by mail, or to vote at an early voting station in hopes of avoiding crowds, is mainly spurred by a surge in the number of coronavirus cases.

But data suggests it has also been powered by heightened enthusiasm among Democrats who are keen to to deliver an overwhelming defeat to President Donald Trump.

Yet analysts say it’s increasingly likely that the election winner will not be apparent until days after the election.

For instance, in the key swing state of Pennsylvania, a court ruled that election officials should continue to count mail-in ballots that arrive up to three days after the election.

Similarly, in North Carolina, the state’s board of elections said that ballots that were mailed by election day can be counted up until November 12.

Mr Biden is leading in US polls over the incumbent Mr Trump, although the race is tight in key swing states.

Mr Trump cast his ballot on Saturday in Palm Beach, Florida, near his Mar-a-Lago.