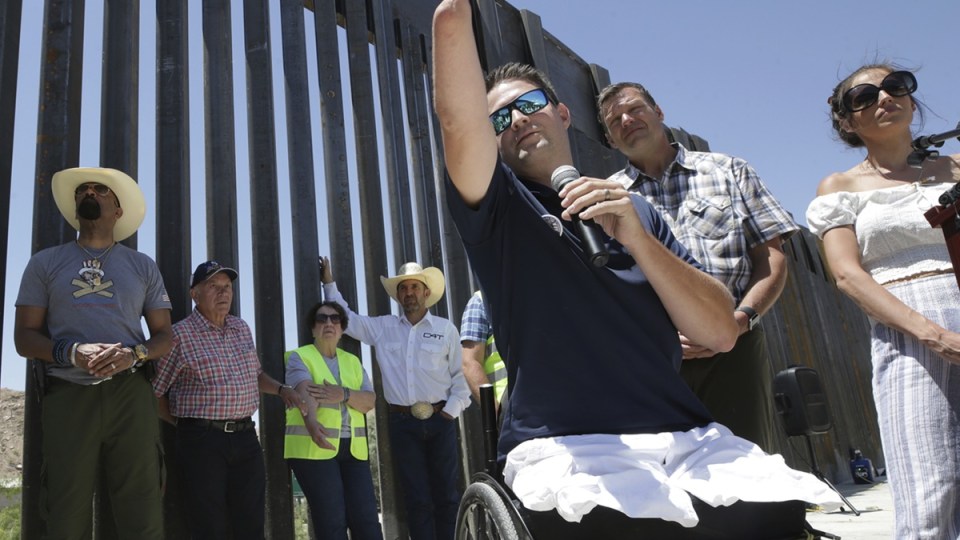 A decorated US Air Force veteran who helped lead a fundraising campaign to build former president Donald Trump’s promised wall along the US-Mexican border has pleaded guilty to conspiring to defraud donors.

Federal prosecutors in Manhattan said Brian Kolfage told prospective donors he would “not take a penny” as he raised more than $US25 million ($34 million) for the “We Build the Wall” campaign, yet took more than $US350,000 ($470,160) and spent money on a boat, a luxury four-wheel-drive, a golf cart, jewellery and cosmetic surgery.

Kolfage, who also pleaded guilty to three tax charges, created the private campaign in December 2018, 14 years after losing his legs and right hand in a rocket attack in Iraq.

The Miramar Beach, Florida, resident had led the fundraising push alongside former Trump adviser Steve Bannon, who was also charged in August 2020.

Mr Bannon’s case was dismissed after Mr Trump granted him a presidential pardon during the final hours of his presidency.

At a remote hearing on Thursday, Kolfage said he told potential donors that their money would be used exclusively to build a wall, but instead kept a large sum for himself and concealed it from authorities to avoid paying taxes.

“I knew what I was doing was wrong and a crime,” Kolfage told US District Judge Analisa Torres.

Kolfage could face 40 to 63 months in prison under recommended federal guidelines, while Badolato faces 41 to 51 months. Sentencings for both were scheduled for September.

The final defendant, Timothy Shea, has pleaded not guilty. His lawyer said this month that Mr Shea would exercise “his constitutional right to a fair trial”.

In a separate case, Mr Bannon was charged in November with two counts of contempt of Congress for defying a subpoena issued by a committee investigating the January 6, 2021, attack on the US Capitol by Trump supporters.

He has pleaded not guilty to the misdemeanour counts.

Have the Logies lost their mojo, or do new awards and the rise of the streamers signal a rebirth?
US militia members acquitted of plotting to kidnap Michigan governor
Today's Stories