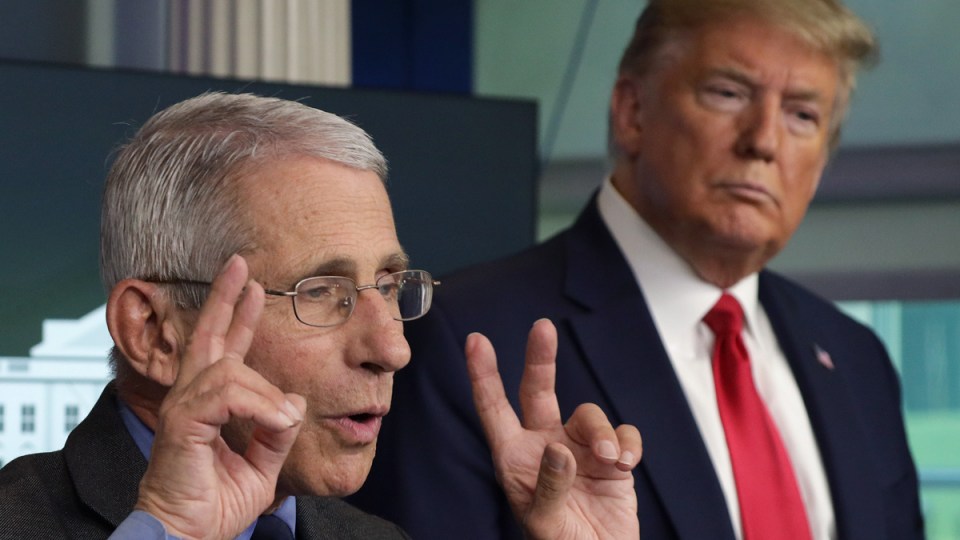 While he was president, Mr Trump clashed repeatedly with Dr Fauci.

Former US president Donald Trump has slammed two of his most prominent COVID-19 advisers in a newly-released statement.

Dr Fauci is the chief medical adviser to President Joe Biden and in a statement released on Monday, Mr Trump called him “the king of flip-flops”.

“Based on their interviews, I felt it was time to speak up about Dr Fauci and Dr Birx, two self-promoters trying to reinvent history to cover for their bad instincts and faulty recommendations, which I fortunately almost always overturned,” Mr Trump said.

“They had bad policy decisions that would have left our country open to China and others, closed to reopening our economy, and years away from an approved vaccine – putting millions of lives at risk.”

He accused Dr Fauci of “moving the goalposts to make himself look as good as possible”.

Dr Birx managed the Trump administration’s response to the pandemic, and Mr Trump said she was “a proven liar with very little credibility left”.

“The states who followed her lead, like California, had worse outcomes on COVID, and ruined the lives of countless children because they couldn’t go to school, ruined many businesses, and an untold number of Americans who were killed by the lockdowns themselves,” Mr Trump said.

“Dr Birx was a terrible medical adviser, which is why I seldom followed her advice.”

Mr Trump’s comments came in response to a documentary that aired on CNN on Sunday.

In the film, Dr Birx said the US did not act aggressively enough to fight the spread of coronavirus, and that deaths “could have been mitigated or decreased substantially” after the initial wave.

Dr Fauci told CNN it seemed like Mr Trump’s virus team was “fighting with each other rather than fighting the virus”.

In his statement, Mr Trump said “Dr Fauci would always talk negatively about [Dr Birx] and, in fact, would ask not to be in the same room with her.”