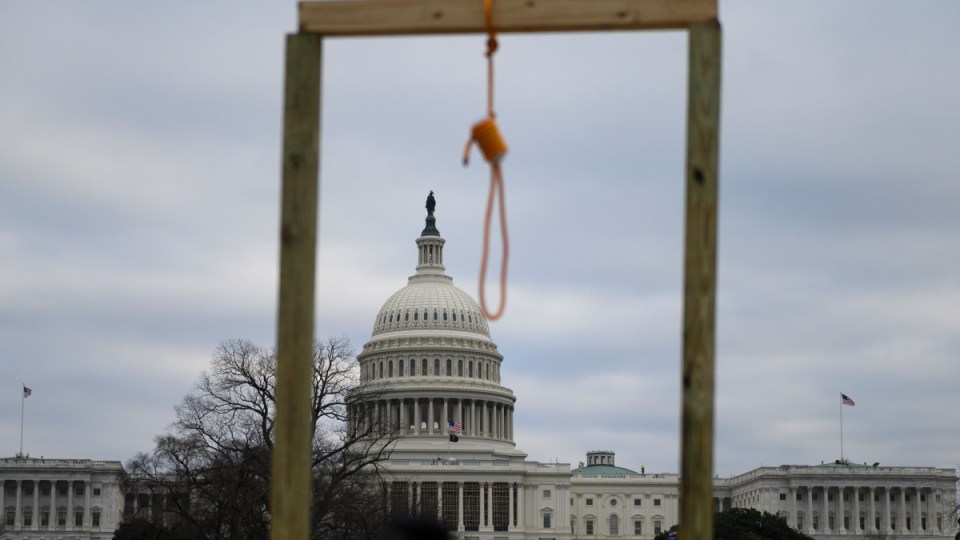 Rioters set up a gallows outside the Capitol, and went hunting for then vice-president Mike Pence. Photo: Getty

House Democrats prosecuting Donald Trump’s impeachment trial for inciting the deadly siege of the Capitol have highlighted through video how members of the pro-Trump mob searched the building for his vice president, chanting: “Hang Mike Pence!”

Previously unseen security videos showed the view from inside the Capitol as rioters smashed windows and fought with police on January 6, coming within 30 metres of the room where Mr Pence was sheltering with his family.

The mob had set up a gallows outside.

One security video showed a group of Capitol police officers being beaten with fists, baseball bats and metal flag poles.

Another came from body camera footage from an officer being beaten. It shows him falling to floor, where he is kicked and tasered before suffering a heart attack.

Senators were noticeably disturbed as they watched footage late on Wednesday (local time) that showed how close the rioters came to finding them. New York senator Kirsten Gillibrand  watched with her hand pressed against her forehead, while Majority Leader Chuck Schumer nodded his head.

Republican senator James Lankford – one of those who objected to the certification of electoral votes on January 6 – bent his head down. Beside him, Senator Steve Daines, put his hand on his colleague’s arm to comfort him.

“It tears at your heart and brings tears to your eyes,” said Senator Mitt Romney.

“I’m sorry I have to show you the next video,” House impeachment manager Eric Swalwell said before airing footage, already seen in some US media, of rioters squeezing a police officer in the doors of the Capitol. Blood drips down the officer’s face as he screams in pain.

“You were just 58 steps away from where the mob was amassing and where police were rushing to stop them,” he told senators.

The Senate hastily called a recess for dinner.

The House of Representatives has charged Mr Trump, a Republican, with inciting an insurrection by exhorting thousands of supporters to march on the Capitol as Congress gathered to certify Democrat Joe Biden’s presidential victory.

The rioters stormed the building, sending lawmakers into hiding and leaving five people dead, including a police officer.

Much of the footage shown on Wednesday highlighted the fact that the Trump supporters who attacked the building also targeted Republicans – whose votes will be needed to convict Mr Trump.

“President Trump put a target on their backs and then his mob broke into the Capitol to hunt them down,” she said.

Mr Trump said repeatedly that Mr Pence had the power to stop the certification of the presidential election results, even though he did not.

Earlier, Democrats said police removed Ms Pelosi from the Capitol complex because they feared for her safety. They played audio of Ms Pelosi’s barricaded staffers whispering for help and showed images of the mob trying to break down a door into her office.

The 80-year-old Pelosi was a long-time political target of the president, who derisively nicknamed her “Crazy Nancy”.

Ms Plaskett said if the rioters had found Ms Pelosi, they would have killed her.

“They did it because Donald Trump sent them on this mission,” she said.

The Democratic House managers prosecuting the case for impeachment, an uphill task in an narrowly divided Senate, said Mr Trump planted the seeds for the riot by encouraging violence and making false claims the election was stolen long before January 6.

“Trump realised last spring that he could lose the November election and began planting seeds of anger among his supporters by saying he could lose only if it was stolen,” Representative Joseph Neguse said.

Conviction, while unlikely, could lead to a vote to bar Mr Trump from running for office again.

Mr Trump’s lawyers, who will have 16 hours to deliver their side of the argument after the House managers are finished, argue his rhetoric was protected by the First Amendment’s guarantee of free speech, and the individuals who breached the Capitol were responsible for their own criminal behaviour.

They also say the trial is politically motivated.

“This case is not about blaming an innocent bystander for the horrific violence and harm that took place on January 6,” lead manager Jamie Raskin said as he opened the proceedings.

“This is about holding accountable the person singularly responsible for inciting the attack.”

A two-thirds majority in the Senate must vote to convict, which means at least 17 Republicans would have to defy Mr Trump’s popularity among Republican voters. On Tuesday, just six out of 50 Republican senators voted that the trial could move ahead even though Mr Trump’s term ended on January 20.

The Senate trial could conclude as early as Saturday or Sunday.